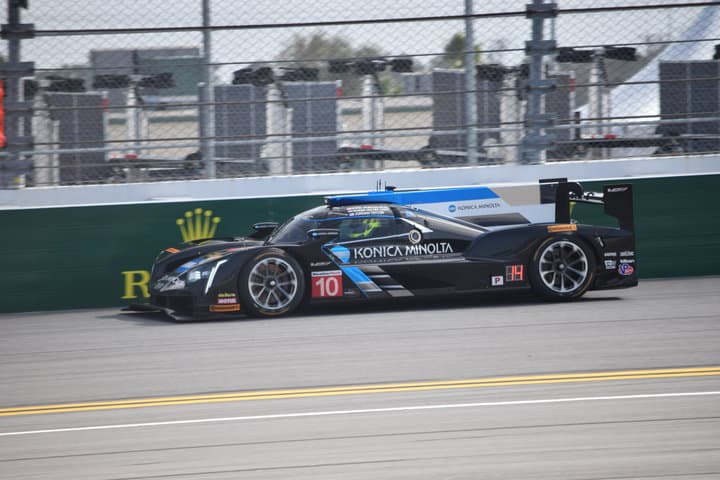 Thursday at Daytona International Speedway is a very busy day for teams in the IMSA WeatherTech SportsCar Championship.  There are three practice sessions totaling 3.5 hours of track time, in addition to qualifying.  Here, we’ll recap all of the Thursday sessions.

Entering the weekend, qualifying seemed to be a near open and shut case for the Cadillac DPi-V.R.s that dominated the charts at the Roar Before the 24.  Ultimately, that was not the case.  In the end, the times were extremely close, but Wayne Taylor Racing’s Renger van der Zande just squeaked out the overall pole by the slimmest of margins.

On the very last lap of the 15-minute session, van der Zande turned in a lap of 96.083 seconds (133.385 mph) to snatch the pole by seven-thousandths of a second over Acura Team Penske’s Helio Castroneves.  Castroneves could only slink back down into the cockpit of his Acura ARX-05 as the assembled photographers sprinted up the pit lane to get to the WTR pit.

“I didn’t expect to win this pole,” van der Zande said during the post-qualifying press conference.  “To be honest, [the crew] only told me I was on pole in turn 5.  I was waiting for them to tell me [what the time was].  I thought it was a nice lap.  I [overshot] turn 5 by quite a bit, but the car somehow turned.  I floored it and just barely kept the car on the track.”

Castroneves will start second, followed by Action Express Racing’s Filipe Albuquerque.  Likely the most surprising run of the session came from Performance Tech Motorsports’ Patricio O’Ward.  The 18-year old racer surprised many with a lap of 96.318 seconds (133.059 mph) to put the No. 38 fourth on the grid, best of the Global LMP2 cars.   Spirit of Daytona Racing’s Tristan Vautier rounded out the top five despite a late off-course excursion.

Jackie Chan DC Racing JOTA’s Robin Frijns will start sixth, followed by Action Express Racing’s Felipe Nasr.  Unfortunately for Nasr, any chance to advance further up the order late in the session ended when Nasr stalled in the infield.

Fernando Alonso had a decent session in his United Autosports Ligier JS P217-Gibson.  Despite describing his team’s pace earlier in the day as “worrying,” Alonso managed to set a time of 97.008 seconds, good enough for 13th on the grid.  He was the last driver within one second of van der Zande’s pole time.

The session itself was not without issues.  Tequila Patron ESM’s Nicolas Lapierre slid off the track at West Bend and hit the tires, damaging the No. 22 Nissan DPi.  Lapierre was able to back up and attempted to drive back to the pits.  However, the car suffered suspension damage in the crash.  As a result, Lapierre parked the car on the grass entering turn 1 of the tri-oval.  He ended up with the 28th fastest time overall.

Things were no better for No. 2 Nissan DPi.  Scott Sharp never got onto the track at all after the team was forced to change the engine.  Despite this, the team is maintaining a positive attitude.

Good news: it’s a long race and there will be plenty of time to get to the front!

Mazda Team Joest’s No. 77 Mazda RT24-P also did not go out during the session due to mechanical issues.

In GT Le Mans, the action was fast and furious between the different manufacturers.  As the session continued on, it became a three-way battle between Ford, Chevrolet and Porsche.  Ultimately, the draft was Chevrolet’s friend.  Jan Magnussen, with some help from teammate Oliver Gavin, turned a class-record lap of 102.779 seconds (124.695 mph) to take the class pole.

Magnussen’s lap was a mere two-hundredths of a second faster than Ford Chip Ganassi Racing IMSA’s Joey Hand in the No. 66 Ford GT.  Porsche GT Team’s Laurens Vanthoor was third, followed by teammate Patrick Pilet.  Ryan Briscoe rounded out the top five in the No. 67 Ford GT.  The top five were separated by just over three-tenths of a second.

In GT Daytona, the session came down to a couple of Ferraris taking on a Lamborghini.  Entries from GRT Grasser Racing Team, Scuderia Corsa, 3GT Racing and Risi Competizione challenged for the pole, but it was Daniel Serra who put the No. 51 Ferrari 488 GT3 on pole.

Serra’s lap of 106.049 seconds (120.850 mph) is not the fastest-ever GTD lap at Daytona (laps turned in during the 2016 Rolex 24 at Daytona were quicker), but is the fastest lap for the class in a qualifying session.  For Spirit of Race, it is their second straight GT Daytona pole since Alessandro Pier Guidi won the GTD pole for last year’s Rolex 24 at Daytona.

Two drivers failed to set times.  They were P1 Motorsports’ Kenton Koch, who did not go out, and Park Place Motorsports’ Tim Pappas.  Pappas did go out, but his Porsche slowed on his first hot lap.  As a result, he never set a time.

The opening practice of the day started out terrible for United Autosports.  Phil Hanson spun the No. 23 Ligier JS P217-Gibson in the infield and collected the wall, bringing out a red flag.  Luckily, the car was not significantly damaged.  Alonso, who is sharing the car with Hanson and Lando Norris, described the damage as simply cosmetic.  Regardless, the No. 23 would not return to the track for the remainder of the opening session.

In the closing minutes of the session, Mazda Team Joest’s René Rast turned in a lap of 97.428 seconds (131.543 mph).  That time held up to be the fastest lap of the morning session.

In GT Le Mans, Hand put the No. 66 Ford GT on top with a lap of 104.062 seconds (123.157 mph).  That lap was nearly a half-second faster than Pier Guidi in Risi Competizione’s Ferrari 488 GTE.  Vanthoor was third fastest, followed by Briscoe and Corvette Racing’s Antonio Garcia.

The only team in the session that failed to set a time was BMW Team RLL’s No. 24 BMW M8 GTE.  Jesse Krohn took the car out at the beginning of the session, but brought it right away for repairs.  The team spent the rest of the session in their garage stall.

Renauer was sixth fastest, followed by Lawson Aschenbach in Michael Shank Racing with Curb-Agajanian’s No. 93 Acura.  Kelvin van der Linde put the Montaplast by Land-Motorsport Audi eighth on the chart, followed by Rolf Ineichen, the fastest GTD driver at the Roar.  Manthey Racing’s Matteo Cairoli rounded out the top 10.

In the second practice session, Acura Team Penske showed what their ARX-05 has to offer.  Castroneves turned in the fastest lap of the session late with a lap of 97.036 seconds (132.075 mph).  That lap was more than three-tenths of a second faster than Lapierre’s Nissan DPi.  Albuquerque was third quickest in the No. 5 Cadillac, followed by Braun in the best ORECA 07-Gibson.  Bomarito was fifth quickest.

Jordan Taylor was sixth fastest, followed by Dalziel and Oliver Jarvis in the No. 77 Mazda.  Nasr and Bruno Senna in United Autosports’ No. 32 Ligier were ninth and 10th.

GT Le Mans saw the Porsches bring their best form to bear.  Pilet put his No. 911 Porsche at the top of the charts with a lap of 103.902 seconds (123.347 mph), a mere seven-hundredths of a second faster than Magnussen.  Richard Westbrook in the No. 67 Ford was third quickest, followed by Dirk Müller in the No. 66 Ford.  Gavin’s No. 4 Corvette was fifth quickest.

GT Daytona saw former Parente top the charts in the No. 86 Acura with a lap of 106.790 seconds (120.011 mph).  That time was nearly a quarter of a second faster than Molina’s No. 82 Ferrari.  Serra was third quickest, followed by Hawksworth in the No. 15 Lexus.  GRT Grasser Racing Team’s Franck Perera was fifth fastest.

Baumann was sixth, followed by Lally and Riley Motorsports’ Adam Christodoulou in the fastest Mercedes.  Scuderia Corsa’s Townsend Bell was ninth fastest in the No. 64 Ferrari, while Balzan in the WeatherTech-sponsored Scuderia Corsa entry was 10th.

The session had two red flag periods, both minor.  The first occurred when Cairoli’s No. 59 Porsche stalled in turn 5.  After a simple retrieval, the session continued.  The second red flag ended the session five minutes early when Kenny Habul stalled his SunEnergy1 Racing Mercedes at pit in.

Night practice emphasized the fact that this weekend’s race is not all that far off of a tossup in the Prototype class.  The top 14 cars were within one second of the best time in the session.  Keeping yourself out of trouble, especially when the weather potentially goes south in the final couple of hours, will be key.

Spirit of Daytona Racing’s Vautier was fastest overall with a lap of 97.215 seconds (131.832 mph).  That lap was two-tenths of a second faster than Castroneves’ No. 7 Acura.

Tequila Patron ESM repaired the No. 22 Nissan DPi after Lapierre’s qualifying crash.  Pipo Derani showed that the car had not lost a thing by turning in the third fastest time.

Mazda Team Joest’s Harry Tincknell was fourth quickest, followed by Norris in the No. 23 Ligier, quickest of the LMP2 cars.  The two Jackie Chan DC Racing JOTA ORECA 07-Gibsons were sixth and seventh with Daniel Juncadella‘s No. 37 topping Ho-Pin Tung‘s No. 78.  Action Express Racing’s Christian Fittipaldi was eighth, while Jordan Taylor and Juan Pablo Montoya rounded out the top 10.

Performance Tech Motorsports’ No. 38 was 14th fastest in the session with O’Ward at the wheel.  Unfortunately, trouble struck midway through the session when Kyle Masson coasted to a stop near the Kink in the infield.  Masson required a tow back to the garage, which necessitated a red flag.

The only team that failed to set a time during the session was Mazda Team Joest’s No. 77.  The team still has lingering issues from earlier in the day that prevented them from getting out on track.  They hope to be back on track Friday morning.

In GT Le Mans, Ford Chip Ganassi Racing IMSA’s Sébastien Bourdais was quickest with a lap of 103.675 seconds (123.617 mph), good enough for 19th overall.  Bourdais’ lap was nearly two-tenths of a second faster than teammate Westbrook.  Risi Competizione’s James Calado was third quickest, followed by Vanthoor.  Corvette Racing’s Garcia was fifth quickest after having moved up from seventh in the final few minutes.

IMSA WeatherTech SportsCar Championship teams will have one more practice session on Friday morning prior to the start of the race.  It is scheduled for 9:40 a.m. and will last for 60 minutes.