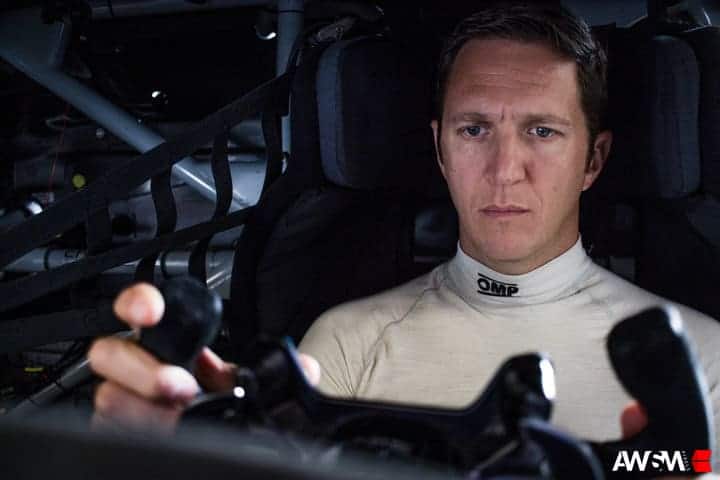 On Thursday afternoon, Rennsport One’s Spencer Pumpelly won the overall pole for Friday’s BMW Endurance Challenge at Daytona, the season opener for the IMSA Continental Tire SportsCar Challenge.  Pumpelly’s lap of 115.136 seconds (111.312 mph) is the fastest CTSC lap of the weekend to this point.

Afterwards, Pumpelly attributed the team’s pace both this weekend and at the Roar to simple familarity.

“I think if you look around, there are a lot of teams with new equipment,” Pumpelly told Frontstretch after the session.  “A lot of them haven’t had the time in the car hat [Rennsport One] has.  I knew that Dillon [Machavern] was a good driver, but what really came across…was that he, Dylan Murcott and the rest of the engineers have done a really good job of moving this program forward.  It really speaks volumes of him, the team and the engineering guys.”

Pumpelly’s lap, turned in right at the end of the session, was more than three-tenths of a second faster than Tyler McQuarrie for the new Carbahn Motorsports team.  McQuarrie indicated to Frontstretch that he will be in the team’s No. 39 Audi R8 LMS GT4 for eight of the ten races in 2018.

KohR Motorsports’ Kyle Marcelli will start third in the best of the Mustangs, followed by Rick Parfitt Jr. in the No. 13 GMG Racing Audi.  Bodymotion Racing’s Stevan McAleer rounded out the top five.

“I think it’s really good.  It’s a very nice platform,” Wittmer told Frontstretch.  “The fact that it is a global, homolgated platform, it brings a whole notch of touring car racing to another level.”

Wittmer’s lap was seven-hundredths of a second faster than Britt Casey Jr. in the No. 77 Audi.  Pierre Kleinubing completed the C360R sweep of the top three in third.

In Street Tuner, BimmerWorld Racing’s Devin Jones turned in the fastest lap of the weekend to claim the class pole in his BMW 328i.  Jones’ lap of 124.217 seconds (103.174 mph) was two-tenths of a second faster than MINI JCW Team’s Nate Norenberg.  Justin Piscitell qualified the No. 55 Murillo Racing Porsche Cayman third in class.

Don’t be surprised if the IMSA Continental Tire SportsCar Challenge is not the only place you see Jones race this season.  Last year, Jones skipped the Road America 120 to race in the XFINITY Series Zippo 200 at Watkins Glen for SS-Green Light Racing.  After  qualifying, Jones explained that he hopes to put together another XFINITY Series opportunity for later this season with VeriStor sponsorship.  Nothing is signed as of yet, but he’s currently looking towards the Drive for the Cure 300 at Charlotte Motor Speedway’s Roval in September.

The BMW Endurance Challenge at Daytona is scheduled to go green at 12:50 p.m. on Friday.  The race will be livestreamed at IMSA.com and FansChoice.tv.  No authentication is required.