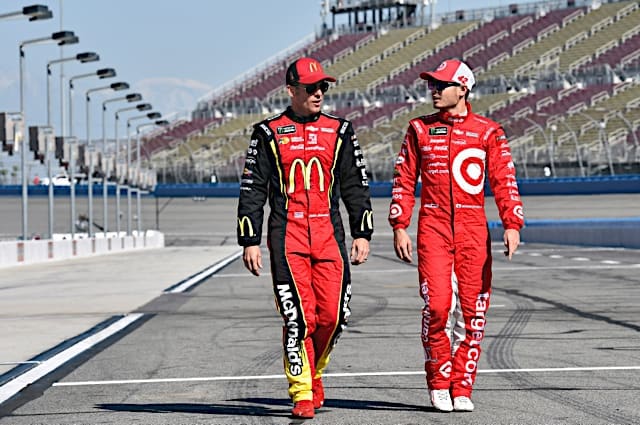 DC Solar will be onboard the CGR Chevrolets for an unspecified number of races as the primary sponsor of McMurray’s No. 1 and Larson’s No. 42, the team announced Tuesday, Jan. 16.

“We’re excited about expanding our relationship with CGR, and we’re especially proud to have Kyle and Jamie representing the DC Solar brand as we move to the sport’s highest level,” DC Solar CEO Jeff Carpoff said in a press release. “We see an immense amount of value in the sport, with the unique opportunity each weekend to build relationships and interact with multiple partners, and we have every confidence that 2018 is going to be a successful year for everyone involved.”

“I’m excited to be a part of their first season in NASCAR’s premier series,” said Larson. “I’ve won with them once in the truck series, so I’m hoping to repeat that a few times this year in Cup.”

Larson will also be sponsored by Credit One Bank in 2018.

“I’m looking forward to racing with DC Solar in Cup this year and a few times with them in the XFINITY Series,” McMurray said. “Their enthusiasm for our team and sport is evident and I’m glad that I get to be a part of this growth with them.”

McMurray will also have sponsorship from Cessna and GearWrench in 2018.

DC Solar will also be the primary sponsor for several 2018 XFINITY Series races in the No. 42 CGR machine, in races driven by Larson and McMurray. John Hunter Nemechek will also share driving duties.

The company has been with CGR in the XFINITY Series for the past three years, the past two as the full-time primary sponsor of Brennan Poole.

Additionally, DC Solar will be an associate sponsor for the Nos. 9 and 10 Ganassi Hondas of Scott Dixon and Ed Jones in the IndyCar Series.