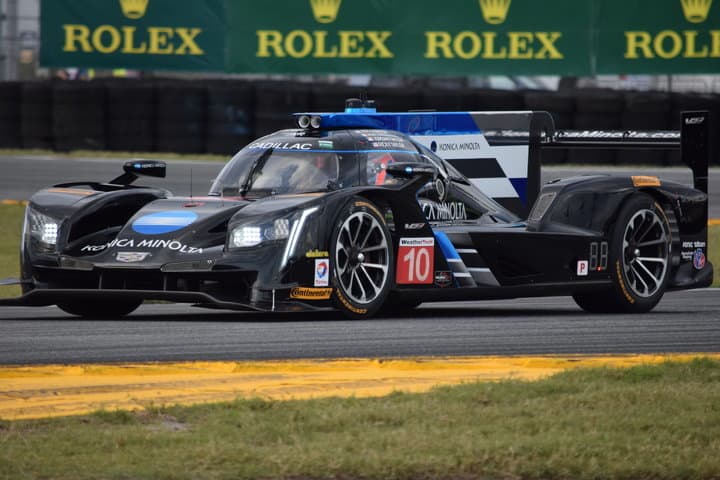 On Sunday afternoon, IMSA WeatherTech SportsCar Championship teams filed out onto Daytona International Speedway’s 3.56-mile road course for one more 60-minute session.  Like the previous sessions, a Cadillac was on top.  This time, it was Wayne Taylor Racing’s Jordan Taylor who led the pack.

Taylor posted a time of 96.757 seconds (132.456 mph) to lead the pack.  This lap was nearly a full second slower than the lap Felipe Nasr posted during pit and garage stall qualifying earlier in the day.

Nasr is very happy to be back in Daytona and quite pleased with his Roar.

“I wanted to be back here in IMSA and finally I am here,” Nasr stated after the test wrapped up.  “The team is really focused on the race.  We all feel very confident in the car.  Today in the qualifying session, we gave everything we had and finished first.  The cars at the front are very close in time.  I am pretty happy with the way the Cadillac is performing.  When I ran here in 2012 it was one of the best experiences of my career.  The IMSA championship is growing.  There is such a strong field here, it is great for a racing driver to be competing at Daytona.  I got a third-place here, and now I want to go for the win.”

Nasr’s Rolex 24 at Daytona start in 2012 came with Michael Shank Racing as a result of winning the Sunoco Rolex 24 at Daytona Challenge.  That is a special award for racers in British series that grants the winner a top ride in the Rolex 24.  Nasr won the award as a result of winning the 2011 British Formula 3 championship.  A veritable unknown at the time in the United States, Nasr surprised a number of onlookers with his speed in keeping an older car in the hunt for the overall win before finishing third.

In GT Le Mans, Porsche GT Team’s Laurens Vanthoor was fastest with a lap of 104.550 seconds (122.582 mph).  However, late in the session, Vanthoor had an issue and was forced to pull off-course at the bus stop chicane.

Vanthoor’s lap was six-hundredths of a second faster than teammate Nick Tandy in the No. 911.  Corvette Racing’s Jan Magnussen was third quickest, followed by Tommy Milner and Alessandro Pier Guidi.

Both of Ford Chip Ganassi Racing IMSA’s Ford GTs loaded up after the qualifying session.  Joey Hand’s lap of 103.610 seconds (123.695 mph) from qualifying held up as the fastest GTLM lap of the Roar Before the 24.

In GT Daytona, GRT Grasser Racing Team’s Ezequiel Perez Companc was fastest in the final session with a lap of 107.802 seconds (118.885 mph).  The lap was only two-hundredths of a second faster than AJ Allmendinger in Michael Shank Racing with Curb-Agajanian’s No. 86 Acura.  Franck Perera in the No. 11 GRT Grasser Racing Team Lamborghini was third fastest, followed by Côme Ledogar in the No. 93 Shank Acura.  Manthey Racing’s Sven Müller rounded out the top 5.

Overall, the fastest GT Daytona lap of Roar Before the 24 went to GRT Grasser Racing Team’s Rolf Ineichen.  Ineichen’s lap of 107.104 seconds (119.659 mph) was set Friday afternoon in session No. 1.

Results of IMSA WeatherTech SportsCar Championship Roar Before the 24 Session No. 7 Results

The next time that WeatherTech SportsCar Championship teams will be on-track will be during the first practice session for the Rolex 24 at Daytona on Thursday, Jan. 25.  Frontstretch will be in Daytona to provide you with live updates from the track.