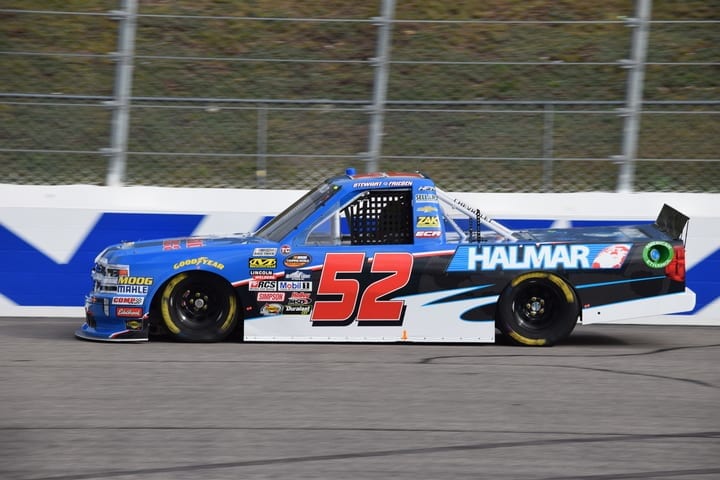 In the early afternoon session, ThorSport Racing’s Matt Crafton was fastest with a lap of 20.129 seconds (94.073 mph).  This lap was six-hundredths of a second faster than Kyle Busch Motorsports’ Christopher Bell.  K&N Pro Series West points leader Todd Gilliland in the part-time No. 46 was third quickest, followed by Johnny Sauter.  Ben Rhodes rounded out the top five.

Harrison Burton was sixth quickest, followed by Chase Briscoe and John Hunter Nemechek.  Noah Gragson was ninth fastest, while Gray Gaulding rounded out the top 10.  The only playoff contender that was outside of the top 10 was Austin Cindric in 17th.

Briscoe was fastest overall of the 14 drivers who completed a 10-lap run in the session.  Briscoe averaged a lap time of 20.412 seconds (92.770 mph).  The lap average was nearly two-tenths of a second faster than Harrison Burton.  Gilliland was third best, followed by Kaz Grala and Landon Huffman.

32 of the 34 teams on-site ventured on track and recorded times during the session.  The only trucks that failed to set times were the two Norm Benning Racing Chevrolets for Norm Benning and Mike Senica.

In the mid-afternoon practice, Friesen (who was 13th quickest in session No. 1) was fastest.  He was the only driver to get into the 19-second bracket all day.

Friesen’s lap was one-seventh of a second faster than Harrison Burton in the DEX Imaging Toyota.  Sauter was the fastest playoff contender in third, followed by Rhodes.  Grala rounded out the top five.

Bell, who was 15th quickest in the session, had the best 10-lap average at approximately 20.484 seconds (92.444 mph).  That average was a little more than half a tenth of a second faster than Grala.  Ryan Truex had the third-best average, followed by Rhodes and Harrison Burton.

Three drivers are attempting to make their Camping World Truck Series debuts this weekend.  Of those three, Mason Diaz in the No. 86 Prince William Marina Chevrolet appears to be the fastest of them.  Diaz was 23rd fastest in the first session and 17th quickest in Happy Hour.  He also has the most experience at Martinsville of the three, having competed in the ValleyStar Credit Union 300 earlier this year.

16-year old Legends veteran Dawson Cram was slowest of those who posted a time in the first session.  In Happy Hour, he moved his Bojangles’ Chevrolet up to 27th.  Finally, 20-year Texan Bayley Currey was 29th and 28th quickest in the two sessions..

Both Diaz and Cram must qualify in the top 27 on Saturday morning in order to qualify for the Texas Roadhouse 200 since neither team has competed this year.  As a result, Cram is borderline on making the field based on his speed in practice.

Qualifying for the Texas Roadhouse 200 is scheduled for 10 a.m. Saturday morning.  The session will air live on FOX Sports 1.