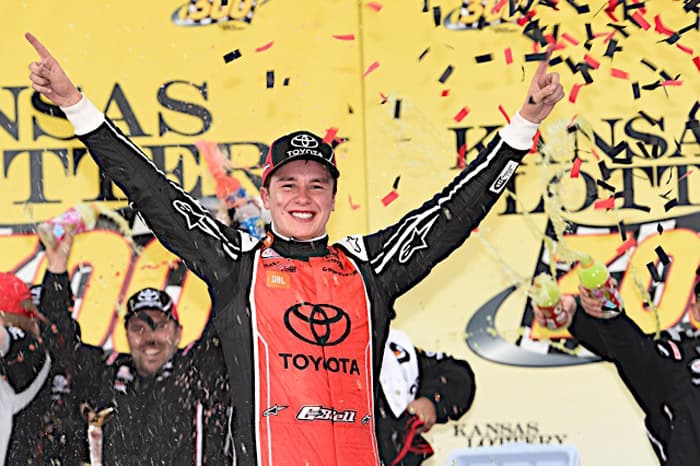 As the 2017 season inches ever closer to its conclusion, Christopher Bell is making a run for the Camping World Truck Series championship with Kyle Busch Motorsports in what turns out to be his final year in the series. Next season, he’ll join Joe Gibbs Racing to run full-time in the XFINITY Series.

“Christopher has proven himself at every level of racing and we are excited to have him run full time in our XFINITY Series program starting in 2018,” said team owner Coach Joe Gibbs via a team release. “He has shown great maturity both on and off the track and we think he is ready for this opportunity. We look forward to watching his continued progress in the sport.”

Just a week after JGR announced the addition of Bell to its 2018 lineup, he scored a win last Saturday at Kansas Speedway in just his fifth series start. The quick trip to Victory Lane shows why the organization tapped the young talent to move through its ranks. He led just four laps, but those included the most important one: the checkered flag lap.

For Bell, the 2016 Truck Series season was a roller-coaster of up-and-down finishes that began with an airborne flight across the start/finish line at Daytona International Speedway. Additionally, he was largely overshadowed by the incredibly dominant success of teammate William Byron, who is currently racing for the XFINITY Series championship with JR Motorsports ahead of his move to the Monster Energy NASCAR Cup Series next season.

Fast forward to the 2017 Truck Series season, and Bell has been the driver to beat throughout the year, scoring five wins, 13 top fives and 17 top-10 finishes in 19 races. He’s currently the points leader with four races remaining and looks to be a lock for the Championship 4 at Homestead-Miami Speedway, especially with the cushion his playoff points allows him to enter the Round of 6 with.

“I think Steve (DeSouza) and the guys at JGR asked me earlier about him, and I was still at KBM when Christopher started coming around and running races,” Phillips said after his trip to Victory Lane. “I would say this about KB (Kyle Busch), KB doesn’t get enough credit for his feel in a race car, everybody just thinks he’s fast. The information he gives me is really good and helps the crew make better decisions, and Christopher for no more experience than he has, is really good – his information is as good as any young kid I’ve worked with in my career and I’ve seen a few.”

“I think he demonstrated that today obviously by getting first place, but when I think about him for a second here, that’s his fifth XFINITY race and only his second mile-and-a-half race in these types of cars and that was pretty special I thought,” DeSouza echoed with a smile on his face. “I know he was a little bit nervous this weekend trying to feel out the cars and confidence came and performance came. Eric (Phillips, crew chief) did an awesome job with this whole group and I know for Joe Gibbs Racing, obviously we’re excited about the balance of this year as he’ll be in the car and then next year with Toyota, TRD and David Wilson (TRD president) and everybody at TRD and the support that they’ve given him and just really watching him come up through the ranks.

“He’s earned this opportunity, taken full advantage of it and really excited to have JBL on our car this weekend for the very first time so I’m excited for Toyota, for Joe Gibbs Racing, for all of our group.”

Bell, who made his fifth career XFINITY start Saturday, had a previous best finish of fourth, that came in his debut at Charlotte Motor Speedway earlier this year, and for much of the race it appeared he would end up settling for another top five.

But inside 10 laps to go, Bell changed his line and erased a more than two-second advantage Jones held in the closing circuits.

“I ran him (Erik Jones) down from however far back I was and I got there and its always tough to make the pass because you get up there and the air gets disturbed and you don’t have the grip that you have by yourself,” Bell said when asked about his run to the lead. “We’re all riding around on the top there and our tires are really old and worn out and everybody is sliding around and I got a big run off of two. “I tried to drive in really deep into Turn 3 and clear him and get back to the top.”

Once the driver of the No. 18 had his teammate cleared, Bell slid up into the high line, while Jones proceeded to pile right into his back end. Both drivers scraped the wall, but Jones got the worst of the damage, especially on the front end, which resulted in a severe tire rub. He was left to limp around the apron until the checkered flag flew on an eventual 15th-place finish.

“Just really thankful to be here and bummed at the way it finished, but happy it held on,” Bell said when asked about the incident between the two. “I was getting tire smoke in the cab those last couple laps and I was worried that we weren’t going to make it.”

For the time being, Bell has a Truck Series championship to focus on, but the victory last Saturday at Kansas Speedway proves exactly why JGR snagged the 23-year-old for its XFINITY Series program. After all, everyone remembers what happened with William Byron, who was easily the driver to beat for the 2016 Truck championship.

It’s clear JGR didn’t want to see another budding talent snapped up by a different organization, and it’s easy to see exactly why too.