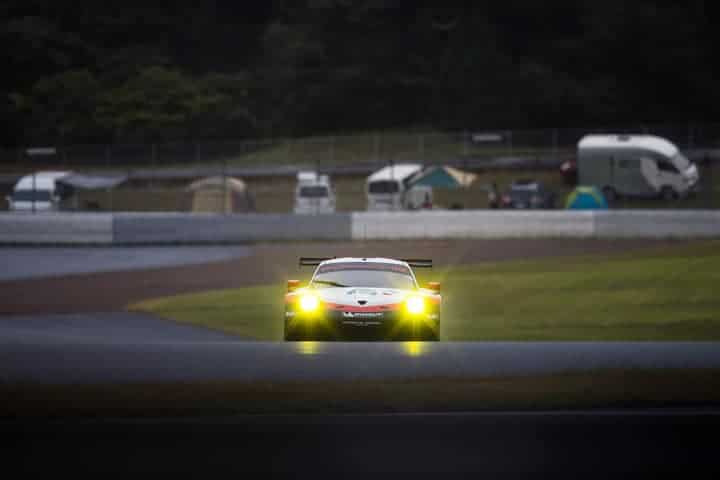 On Saturday, Porsche LMP Team’s Earl Bamber and Brendon Hartley turned in an average lap time of 95.160 seconds (107.451 mph) to put the No. 2 Porsche 919 Hybrid on the overall pole for Sunday’s 6 Hours of Fuji.  Despite the wet conditions, the times were extremely close.  The No. 2 beat their sister car (shared by André Lotterer and Nick Tandy) by seven-hundredths of a second in average time.  Tandy actually turned the fastest lap of the session, but Lotterer was three-tenths back.

Toyota GAZOO Racing’s No. 8 shared by Sébastien Buemi and Kazuki Nakajima will start third, less than two-tenths of a second off pole.  The No. 7 Toyota is nearly 1.5 seconds off the pole.

In LMP2, Valliante REBELLION’s David Heinemeier Hansson and Nelson Piquet Jr. set an average time of 104.196 seconds (98.133 mph) to set the overall pole.  For Heinemeier Hansson, it is his first career pole in LMP2 and he was quite pleased.

My first ever pole in LMP2 by my own driving ?. Amazing run by @NelsonPiquet and fantastic car by @RebellionRacing. Just ace. Love rain ?

The No. 31 Valliante REBELLION ORECA 07-Gibson of Julien Canal and Bruno Senna will start second, one-sixth of a second back.  Points leaders Thomas Laurent and Ho-Pin Tung will start third, followed by Signatech Alpine Matmut’s Andre Negrao and Nicolas Lapierre.  Alex Brundle and David Cheng in the No. 37 Jackie Chan DC Racing entry will start fifth in class.

In GTE-Pro, Porsche GT Team’s Richard Lietz and Frédéric Makowiecki‘s best laps were a mere eight-thousandths of a second apart. The average of those times equated to a time of 107.577 seconds (95.049 mph).  That time was good enough to give the No. 91 Porsche 911 RSR the class pole.

Lietz and Makowiecki’s time was seven-sixteenths of a second faster than Ford Chip Ganassi Racing UK’s No. 67 for Andy Priaulx and Harry Tincknell.  The No. 66 Ford of Stefan Mücke and Olivier Pla will start third in class, followed by the No. 71 AF Corse Ferrari of Sam Bird and Davide Rigon.  The No. 92 Porsche of Michael Christensen and Kevin Estre will start fifth in class.

In GTE-Am, Clearwater Racing’s Matt Griffin and Weng Sun Mok averaged a lap time of 109.408 seconds (93.458 mph) to claim the class pole.  Once again, the key is to have two drivers put down similar laps.  Griffin and Mok’s times were only separated by four-tenths of a second.

The Dempsey Proton Racing No. 77 Porsche will start second in class, but the best laps from their nominated drivers (Matteo Cairoli and Christian Ried) were separated by more than 2.3 seconds.  Cairoli was the fastest GTE-Am driver while Ried was tied as the slowest.  The result was that the slower Clearwater Racing Ferrari ended up three-tenths of a second faster in the lap average than the Porsche.  Aston Martin Racing’s No. 98 for Paul Dalla Lana and Pedro Lamy will start third in class.