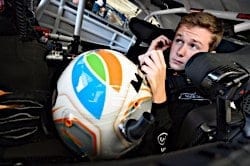 This season was considered a big year for Matt Tifft, as he was replacing reigning XFINITY Series champion Daniel Suarez and getting a crack at the series where Joe Gibbs Racing has dominated over the past decade. For the Ohio native, there have been many positives, along with a few setbacks.

Tifft, 21, had 11 previous starts in the XFINITY Series coming into his rookie campaign, eight of which were for JGR. Recording 10 top-10 finishes in the opening 29 races of the season might be good for some, but the driver of the No. 19 car was not content.

Consistency is the key for Tifft.

“I think we’ve had our fair share of ups and downs,” Tifft told Frontstretch regarding his 2017 season. “I feel like since we’ve gotten the second half of the season going, we’ve had better speed. We’ve been a little more consistent and trending in the right direction. I feel like we’re in a pretty good place now and we just have to continue on being consistent.”

Between the regular season finale at Chicagoland Speedway and last weekend’s race at Charlotte Motor Speedway, Tifft has four consecutive top 10s, which is a career best. In those races, he’s placed sixth and ninth, twice, respectively.

Prior to this hot streak, Tifft had only had back-to-back top-10 finishes at Dover International Speedway and Pocono Raceway back at the beginning of June. Could the No. 19 team be hitting its peak at the right time?

“I think just situational and chemistry wise, everyone knows where we are at and where we have been for the year,” Tifft said. “I think our mindset right now is keep on being smart and bring good equipment. We want to keep capitalizing on those good runs and have a string of them. We want to keep that going for the rest of the year.”

Tifft has faced a lot of challenges in his rookie season. The No. 19 team is led by rookie crew chief Matt Beckman, and though Beckman has experience as an engineer in the Cup Series, he’s never had to lead a team. He does have experience with the organization as he joined Joe Gibbs Racing in 2007.

The driver has also had to focus on bettering himself throughout the season. This series is the highest competitive form of motorsports that Tifft has participated in and knew it wasn’t going to be an easy rookie year.

“There are definitely times throughout the year that I’ve had to get better and be more aggressive on restarts and short runs,” he said of what he can improve on. “It’s been fun. We’ve almost had a trade-off with how we were good on long runs and focusing so much on short runs. We’re trying to get the long run speed back in it.

“You just play that balance of going back and forth. I just need to make sure that my communication is good and same thing back from the team. It helps when everyone is talking and on the right page. The more I can do and step up with that in the races, and in practice, too. Everything kind of happens from practice.”

On paper, the No. 19 car has placed a season-best of third at Mid-Ohio Sports Car Course and Road America. He was leading coming to the white flag at Road America before Jeremy Clements dumped him for the victory.

With his recent success, Tifft easily advanced into the second round of the playoffs, with an average finish of eighth during the first three races of the postseason. Meanwhile, the No. 19 car has led laps in only three races in 2017, never leading more than six laps in a given race.

Tifft expected the racing to be difficult, but this difficult?

“We had a lot of variables between the aero package change and the new crew chief and different people on the team,” Tifft said on if thought the XFINITY Series was going to be this difficult. “I don’t know if you ever know how it’s going to be. You can chalk up any sort of dream team, and it might not go well. You never know what you’re going to get. I think at the end of the day, the stuff we’ve been through this year, I’ll be able to be a better driver because of it and I think Matt will be a better crew chief because of it.”

Last week it was announced Tifft will be joining Richard Childress Racing in 2018 to pilot the No. 2 machine full-time. But with four races left to goal, there are many goals at JGR that have yet to be filled, including that elusive first victory and of course a chance at the title in Homestead.

The good thing for the No. 19 crew is Suarez showed last season, if you’re there, you have an opportunity. That team dominated at Homestead, leading 133 of 200 laps.