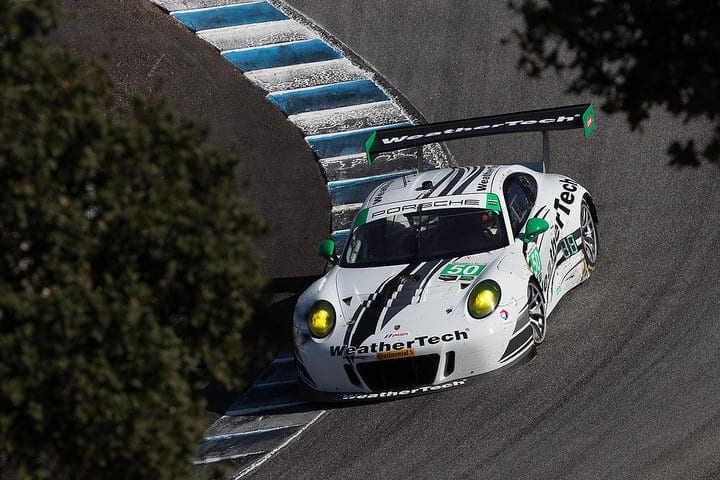 On Tuesday, WeatherTech Racing announced that Porsche factory racer Patrick Long will join regular drivers Gunnar Jeannette and Cooper MacNeil in the No. 50 Porsche at Road Atlanta.  For Long, the move is a team switch since he’s raced part-time this season for Alegra Motorsports alongside Daniel Morad.

Long is happy to team up with Jeannette and MacNeil.

“I have been friends, and competitors, with Cooper and Gunnar for a long time,” Long stated in the team’s official press release.  “When they switched back to the Porsche mid-season I knew that would be a good opportunity for me to run in a strong car at Petit Le Mans. They won at Long Beach early in the year and I am hoping to combine with them and win next week at Road Atlanta. They have always run a top program and they are fun guys to hang around with as well. I think we will have as good a shot as anyone come the green flag.”

In Long, WeatherTech Racing is getting a driver at the top of his game.  Long won the GT Sprint and GT overall championships this year in Pirelli World Challenge for Wright Motorsports.  Long earned two Sprint-X wins alongside Jörg Bergmeister and two solo Sprint wins in his Porsche 911 GT3 R.

In the IMSA WeatherTech SportsCar Championship this year, Long has started four of the 11 rounds.  In the Rolex 24 at Daytona, he was part of CORE autosport’s No. 54 Porsche.   That team had a series of issues in the race that led to a 22nd-place finish in class.  Long debuted in Alegra Motorsports’ No. 28 at Lime Rock and promptly put the car on the podium in third.

At Road Atlanta, Long has a great record.  He has three previous class victories in the Petit Le Mans.  In 2005 and 2006, he won the GT class with Petersen/White Lightning Motorsports in a Porsche 911 GT3 RSR alongside the aforementioned Bergmeister.  In 2007, he teamed up with fellow Porsche factory racers Timo Bernhard and Romain Dumas to win the LMP2 class in a factory Porsche RS Spyder.  The effort finished second overall, less than a second behind the overall-winning Audi R10.  More recently, Long finished second in the GTLM class in 2014 in Porsche North America’s No. 912 Porsche 911 RSR.  He did not compete in last year’s 10 hour event.