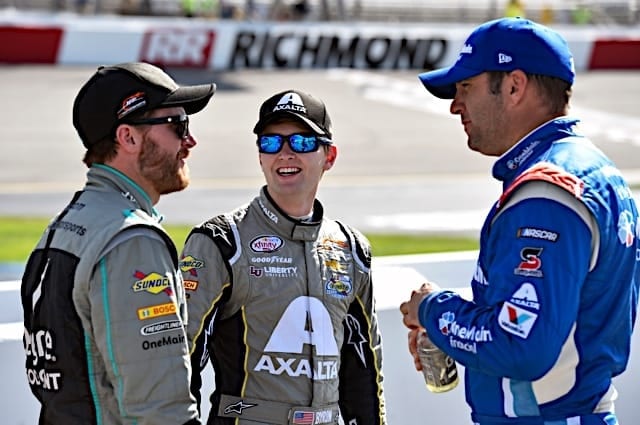 The regular season for the 2017 XFINITY Series has come and gone and one thing has remained certain since Daytona: JR Motorsports is the team to beat.

Elliott Sadler, Justin Allgaier, William Byron and Michael Annett comprise the quartet of drivers under the JRM banner. The organization has been the most consistent XFINITY team all season long, even more so than some of the Cup Series organizations that run in the penultimate division of NASCAR.

Heading into the playoffs, Sadler, Allgaier and Byron are locks to compete in the championship race at Homestead-Miami Speedway for most people. The Nos. 7 and 9 teams are the only XFINITY regulars that have multiple victories this season.

Most recently, Allgaier took advantage of a late race restart with 15 laps to go at Chicagoland Speedway to win his second race at his home track. And though it started off the season a bit shaky with consecutive 30th-place efforts at Daytona and Atlanta Motor Speedway, the No. 7 team was the powerhouse early in the year. At Phoenix International Raceway, the site of Allgaier’s first triumph of the season, he led a race-high 85 laps.

Allgaier is in the midst of his most competitive season. Sure, he has finished the season with more top-five finishes and more top 10s, last year being one of them (13 top fives and 27 top 10s), but this year he has spent the most time out front of all XFINITY drivers. The No. 7 team has led 495 laps, a career-high for the eighth year driver, more than doubling his previous best, occurring in 2010.

Byron had quite the summer, winning three out of five races between Iowa Speedway in late June and the Brickyard toward the end of July. The No. 9 team took advantage of other drivers’ miscues to pick up victories, but were ultimately apart of the conversation by consistently running in the top five.

The No. 9 team paced the field for 131 laps during the races of which he was victorious. Outside of those events, the rookie driver led just 29 circuits all season. However, winning guarantees advancement into the playoffs and even though Byron has gone through a rough patch recently, it would be awfully surprising to not see him at Homestead fighting for his first NASCAR title. He goes into the postseason as the championship leader with 25 playoff points.

Sadler leads XFINITY regulars in top fives (11) and top 10s (19), but has led 111 laps, less than both Allgaier and Byron. And since the season-opening race at Daytona, the No. 1 car has been out front for only 71 circuits, leading 40 in the first race of the year. Consistency awarded Sadler the regular season title, but he’s admitted that it all comes down to the final race of the season. The rest of the year means very little.

Then there is Annett, whose bright spot of the season came at Road America, finishing runner-up to Jeremy Clements.

Annett has paced the field for eight laps this season, the fewest of the 12 drivers who made the playoffs. He has an average starting position of 17th, which he believes is one of the reasons for not earning many stage points during the regular season. Ultimately, the No. 5 team went into the final race of the regular season needing to have a solid run, or miss the postseason. Annett finished 15th at Chicago.

Overall, there is a distinct chance that all four drivers make it to Homestead. Realistic? Probably not. We saw what happened during last year’s playoffs when Ty Dillon, one of the favorites for the championship was bounced after the first round.

Knowing the success JRM had during the regular season, team owner, Dale Earnhardt Jr. is confident of the performance his teams have shown, but will never count out the competition.

“A lot of guys have some parts and pieces on the shelf that they aren’t going to run until it’s time to win,” Earnhardt said during a press conference at Watkins Glen International in early August. “We’re having a great season. I think that we are definitely in the conversation with where our guys are, but you don’t take anything for granted because you don’t know what everybody is holding back and what everyone might have in store for themselves going into those last few races.

“Some of these guys may have some performance and speed sitting on the shelf that their not willing to run until the time is right. They might also be trying to develop other ideas and theories within their own setups and trying to find an advantage before the Chase gets here.”

In the XFINITY Series’ inaugural postseason in 2017, that was simply not the case. Erik Jones and Daniel Suarez, along with the JRM duo of Sadler and Allgaier were the fastest drivers all season long. They wound up in the Championship 4 at Homestead.

However, it has been that way in the Cup Series over the last few seasons. Jimmie Johnson was unheard of in the regular season before going on a typical playoff tear. Kyle Busch fought adversity throughout the 2015 season, coming back from a broken leg to be standing tall at Homestead. Think back to 2012 when Brad Keselowski reigned the sport; he didn’t have the fastest car, either. Of course, that was a different playoff format.

Anything’s possible in the postseason.

“You can’t really determine who is going to be strong when it comes down to it,” Earnhardt said. We’re having a great year. I’m glad, but I told the guys after we won Indy that we’ve got to keep our guard up and stay at it and not think that it’s going to be easy.”

Great year indeed. Sadler, Allgaier and Byron swapped the first three positions in the standings back and forth from the seventh race of the season on. That particular trio of drivers should end up dueling it out for the title.