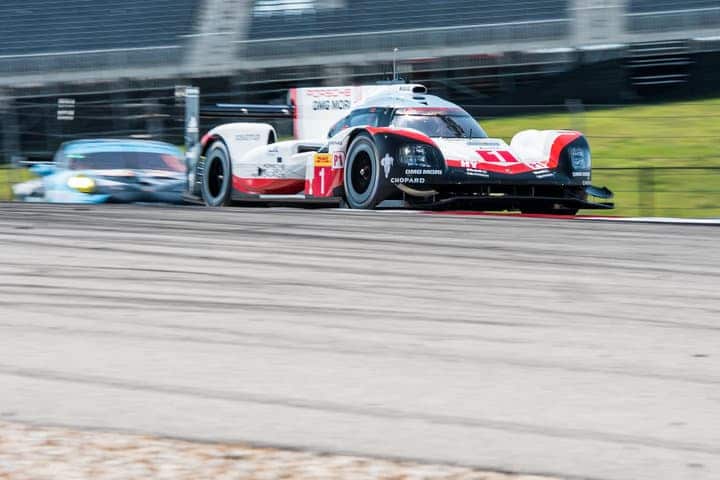 Jani and Tandy’s average time was a quarter of a second faster than the combination of Earl Bamber and Timo Bernhard in the No. 2 Porsche.  Sébastien Buemi and Kazuki Nakajima were more than 1.6 seconds back in third.

In LMP2, Signatech Alpine Matmut’s Nicolas Lapierre and Andre Negrao combined to set an average lap time of 114.024 seconds (108.167 mph) to take the class pole and fifth overall.  The time could have been marginally quicker, but Lapierre’s final lap did not count due to a track limits violation.

Lapierre and Negrao’s average time was a quarter of a second faster than Valliante REBELLION’s No. 13 ORECA 07-Gibson qualified by Mathias Beche and David Heinemeier Hansson.  Jackie Chan DC Racing’s No. 38 will start third thanks to the talents of Oliver Jarvis and Thomas Laurent.  Vaillante REBELLION’s No. 31 will start fourth.

Bruno Senna, who shared the No. 31 with Julien Canal in qualifying, turned in the fastest LMP2 lap of the weekend at 113.081 seconds (109.069 mph) during the session.  Unfortunately for Valliante REBELLION, Canal could barely get into the 115-second bracket during his time in the car.

Bird and Rigon’s average time was two-tenths of a second faster than Ford Chip Ganassi Racing UK’s No. 67 Ford GT for Andy Priaulx and Harry Tincknell.  Aston Martin Racing’s No. 95 for Nicki Thiim and Marco Sørensen will start third in class, followed by AF Corse’s No. 51 Ferrari for James Calado and Alessandro Pier Guidi.  Stefan Mücke and Olivier Pla in the No. 66 Ford will start fifth.

Finally, Aston Martin Racing’s domination of the GTE-Am class continued in qualifying.  Former Formula One racer Pedro Lamy turned in the fastest GTE-Am lap in qualifying with a lap of 124.949 seconds (98.709 mph), just eight-thousandths of a second slower than his best time in Free Practice No. 3.  Paul Dalla Lana‘s best time was nearly 2.2 seconds off of Lamy, but that was still more than enough to put the No. 98 Aston Martin on the class pole with an average time of 126.031 seconds (97.862 mph).

Dalla Lana and Lamy’s average time was 1.172 seconds faster than what Thomas Flohr and Miguel Molina could manage in the Spirit of Race No. 54 Ferrari.  Matt Griffin and Weng Sun Mok qualified the No. 61 Clearwater Racing Ferrari in third.

The LMP2-class No. 25 CEFC Manor TRS Racing ORECA 07-Gibson of Roberto Gonzalez, Vitaly Petrov and Simon Trummer did not set a time at speed in the session.  As a result, they will start dead last (26th) on the grid.