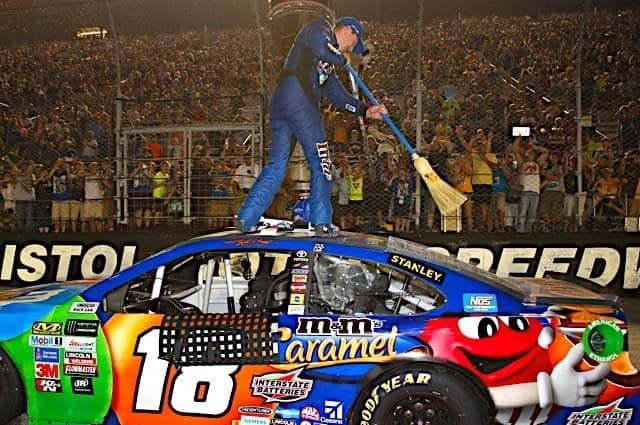 Monster Energy NASCAR Cup Series: Bristol Win Slips Through Fingers of Erik Jones, Matt Kenseth – As American screenwriter Eric Roth once said: “Our lives are defined by opportunities… even the ones we miss.”

With fellow Toyota driver Kyle Busch in toe, Jones went on dominate the night, leading 260 laps (having only led 51 in his prior 26 starts.)

But when it came to crunch time, Jones let it slip away, as Busch passed him for good with 56 laps to go. With a playoff spot on a must-win basis, Saturday night may define the remainder of his rookie season if he can’t reach Victory Lane in the final two races of regular season.

Similar statements can be made about Matt Kenseth. The winless Joe Gibbs Racing driver won Stage 2 before being caught speeding on pit road on the ensuing pit stop.

Though Kenseth sits 61 points above the cutoff exiting Bristol, the cushion was put in doubt, as a win by Jones would’ve put Kenseth a handful of points to the good.

And when you have a victory in your hands in the final laps, a drop of pace led Kenseth to a fourth-place finish. Still enough to keep him holding his breath this off-week. – Zach Catanzareti

XFINITY Series: Kyle Busch Cruises to Ninth Bristol Victory – Whenever Kyle Busch is on the entry list of an XFINITY Series event, you know there could possibly be hell to pay. The all-time wins leader in the series is not slowing down.

Hours before the race on Friday evening, Busch shot the No. 18 Toyota to the top of the charts, leading the way in qualifying by nearly two-tenths of a second. Once that happened, the 2009 series champion became the odds-on favorite at one of his best tracks.

Busch led 186 of 300 laps, sweeping his second race of the weekend. After stage 1, he had to come from the back as he received a speeding penalty. The final 130 laps of the race, it was the Rowdy show.

The Las Vegas native is often scrutinized for coming down to the lower series, ultimately taking away victories from up-and-comers. But with as much as he gives back to the sport, its time to sit back and reflect how much Busch actually means to the sport of NASCAR. The guy has 91 victories in 337 career XFINITY starts (27 percent). The 2015 Cup Series champion has five victories in nine starts this season. Incredible. – Dustin Albino

We still have a shot of going out strong and winning a championship in 2017.

Losing two more full-time rides next season is another serious blow to the dwindling fields the Camping World Truck Series has experienced lately. But perhaps more importantly, it emphasizes a sense of urgency for Chase Briscoe and Austin Cindric to make the most of their remaining seat time with BKR.

Only 10 races remain on the 2017 schedule and neither driver has visited Victory Lane, though, Briscoe came incredibly close at Texas Motor Speedway in June. The pair has combined for two poles, eight top fives and 16 top 10s in 28 starts this season. Briscoe sits comfortably inside the cutoff line to make the playoffs, while Cindric is in a must-win situation, and you can bet neither one will let up until the checkered flag flies over Homestead-Miami Speedway in November. – Beth Lunkenheimer

Verizon IndyCar Series: Will Power Reigns at Pocono – For the second consecutive year, Will Power won the ABC Supply 500 at Pocono Raceway. He held off Team Penske teammate Josef Newgarden and Alexander Rossi in the closing laps to earn his 32nd career IndyCar Series win.

James Hinchcliffe and JR Hildebrand crashed in Turn 1 on lap 124. Hinchcliffe attempted to pass Hildebrand on the inside, but instead made both cars loose and they spun into the outside wall.

Newgarden grew his lead in the championship to 18 points over Scott Dixon. The Verizon IndyCar Series competes at Gateway Motorsports Park next weekend. – John Haverlin

Sports Cars: Friday’s Hidden Announcement–  It has been a pretty big week for IMSA.  First, Team Penske announced that Juan Pablo Montoya and Dane Cameron will be one of the full-time driver pairings for the team next season.  On Friday, the Acura ARX-05 was officially unveiled in Monterey, CA.  It is scheduled to debut in January’s Rolex 24 at Daytona.

Another story that has been rumored for months is Team Penske not waiting until January to make their race debut.  RACER’s Marshall Pruett confirmed that news on Friday.  The ARX-05 will be testing this week at Road Atlanta as part of preparations for 2018.  The ARX-05 will not compete in October.

The goal at Petit Le Mans is not data gathering or anything like that.  It is simply to kick butt cheeks.

“We’re going to be there to try to win,” Roger Penske told Pruett.  “This is part of the program, it’s part of the test program. We’re using it kind of going to school with this type of car. Just the pit work, [a] lot of our tools and things that we’ll use for next year we’ve gotta get them out, get the rust off those and see where we are. But look, it’s evolution as we did with the Porsche program, and Tim [Cindric] and I feel very strong about getting a big race under our belt before we get to Daytona.”

No drivers were announced for the Road Atlanta one-off, which will likely be done in an ORECA 07-Gibson.  Montoya is very likely, but his 2018 team Cameron will still be driving for Action Express Racing.  Since the IndyCar season will be over by then, don’t be surprised if Helio Castroneves, Simon Pagenaud (who competed in the event last year for Action Express Racing) or Josef Newgarden get the call to compete. – Phil Allaway

NHRA: Girl Power – Ladies reigned supreme in the two Nitro classes at the Lucas Oil NHRA Nationals from Brainerd this weekend. Leah Pritchett took home the Top Fuel win and was joined by Alexis DeJoria who took the honors for Funny Car. The win was Pritchett’s fourth for the season, making her the first female driver since Shirley Muldowney to win four events in a season. Speaking of four wins, rookie driver 18-year-old Tanner Gray scores his fourth win of the season in Pro Stock.

Pritchett faced off against her Don Schumacher Racing teammate Antron Brown, the points leader in Top Fuel. She notched the win with a 3.682 second, 328.06 mph pass to Brown’s 4.001 seconds, 246.35 mph. Pritchett also raced her way by Rob Passey, Scott Palmer, and Clay Millican on her way to the finals.

“In order to be a champion someday you’ve got beat the champion,” Pritchett said. “We’re on our way, but we have a lot of work to continue doing. Antron is by far the measuring stick right now, and he always has been for me.”

DeJoria has had a rough year, missing several events for injuries late last year and several more this reason to attend to personal matters, but she was certainly on her game in Brainerd. She put down a 3.906 second, 330.96 mph run to best Tommy Johnson, Jr.’s 3.933 seconds, 324.44 mph in the finals.

“I’m very resilient. That’s the way I was raised; you never give up,” said DeJoria. “The last two years have been really difficult. Lots of ups and downs, injuries, no wins, we just couldn’t get up to speed. We’re fighting so hard out here. It’s the hard times that make the wins so much better. You really appreciate every moment.”

DeJoria also beat Tim Wilkerson, Cruz Pedregon and John Force in earlier rounds. Defeating Pedregon and going on to win the event is huge for DeJoria’s championship Countdown hopes as Pedregon entered the event in front of her in standings in tenth place. By putting him out and running two more rounds, she now moves into that tenth spot with a 12 point cushion over him going into the last race of the regular season.

Rookie Tanner Gray continues to impress, running 6.610 seconds at 208.04 mph to score the win over Pro Stock points leader Bo Butner’s 6.629 seconds at 207.85 mph. No. 1 qualifier for the weekend Gray also defeated Erica Enders and Jason Line before meeting up with Butner in the finals.

In Pro Stock Motorcycle it was a battle of teammates as LE Tonglet and Jerry Savoie faced off in the finals. Give this one to Savoie with a 6.846 second, 194.80 run to Tonglet’s 6.910 seconds at 194.02 mph. Savoie raced his way past Mike Berry, Angie Smith, and Matt Smith in earlier rounds. – Toni Montgomery