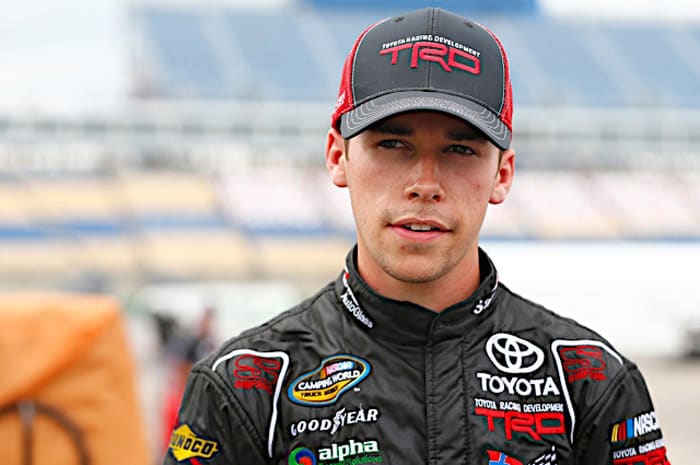 The Camping World Truck Series took a week off while the Cup and XFINITY series headed to Watkins Glen for a weekend of road course racing. During that down time, the month of August suddenly dawned, leaving us with just over a month before the playoffs begin.

Only four races remain until the playoff field is set, and just five drivers have notched a win to almost guarantee their spot in the championship battle. The final stretch of the regular season includes Saturday’s event at Michigan International Speedway, and it keeps going just a few days later when the series heads to Bristol Motor Speedway for the annual Wednesday night event. The series takes the final weekend of August off before heading north of the border to Canadian Tire Motorsports Park, and then it’s off to Chicagoland Speedway for 225 miles to lock in the full, eight-driver playoff field.

Christopher Bell, with four wins to his name thus far, is locked in and won’t be knocked out of the playoff field, regardless of what anyone else does over the next four events. You could, perhaps, say the same for John Hunter Nemechek, given that he has two victories, though that could change, with the right circumstances for another driver.

In all likelihood, Johnny Sauter, Matt Crafton and Kaz Grala, who each have one win apiece, are probably in the playoff field. After all, what are the odds of seeing four different winners that haven’t already visited Victory Lane this season over the next four events? Obviously not impossible, but highly unlikely.

With that being said, that’s where the playoff bubble gets a little more entertaining. Assuming he doesn’t get knocked out by a plethora of victors in the next couple races, Chase Briscoe is in a relatively comfortable position to make the field on points. He currently holds an 88-point cushion over the cutoff line.

Meanwhile, Ben Rhodes and Ryan Truex sit an uncomfortable five and four points ahead of the cutoff line, respectively.

Rhodes has come tantalizingly close to victory a few times this season, only to have something go awry. Anyone remember the epic battles with Kyle Busch at Kansas before the latter prevailed, thanks to a motor failure?

Truex entered this season fully funded, something that didn’t happen for him last year, which ultimately sidelined his efforts. He’s had a season where he’s had the speed to win but managed to stumble in some way, whether it’s a pit road penalty, an offbeat strategy call or another reason altogether.

Four points below the cutoff sits Grant Enfinger, who is in his rookie season. From Charlotte through Iowa, the driver of the No. 98 Toyota finished no worse than seventh and climbed as high as sixth in the standings before a 28th-place result at Kentucky when he crashed out. Though he currently sits eighth in the standings, Grala, who has actually scored almost 100 points less than Enfinger this year, bumps him below the cutoff line thanks to the Daytona victory. Still, being that close to the cutoff line, he could race his way into the playoff field on points.

Beyond Enfinger, Noah Gragson and Austin Cindric would need to run well and see those around them in the standings struggle over the next few races to point their way into the championship battle. Gragson currently sits 41 points behind Truex, while Cindric is 62 markers back.

Of course everything could change for one of these six drivers with a trip to Victory Lane, and you can bet none of them has a true feel for exactly where they stand in points. Sure, their team has probably discussed where they stand, but the simplest way to take the pressure off is to focus on the win.

Because a win would lock them into the championship battle that everyone wants to be a part of come New Hampshire Motor Speedway next month.