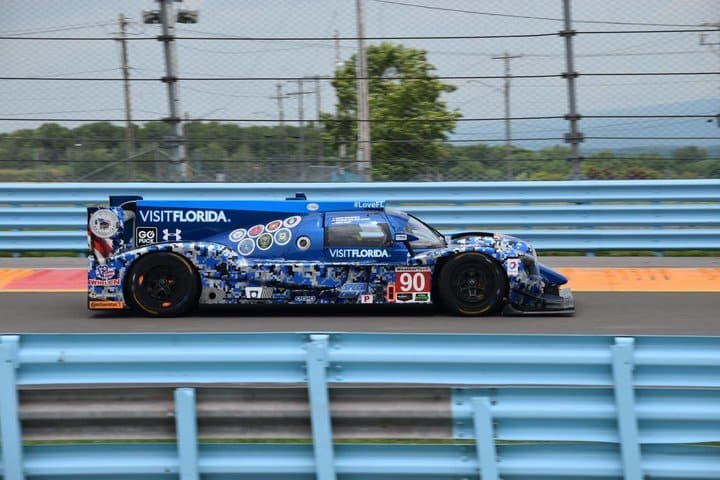 IMSA WeatherTech SportsCar Championship teams had to deal with changeable conditions Friday afternoon during the first practice session at Road America.  The session started off in full wet conditions, but times dropped by more than 20 seconds.

In the closing minutes, Visit Florida Racing’s Marc Goossens turned in a lap of 119.977 seconds (121.463 mph) that was ultimately good enough for fastest overall.  Goossens’ lap was the only lap of the session under two minutes, an excellent debut for the team’s new Ligier JS P217-Gibson (Note: The team’s Riley is pictured above).

Such was the topsy-turvy nature of the session that the best GT Le Mans teams ended up ahead of a number of teams that they would not normally beat.  Porsche GT Team’s Patrick Pilet was fastest in GTLM with a lap of 126.573 seconds (115.134 mph).  The lap, good enough for sixth overall, was a tenth of a second faster than Corvette Racing’s Oliver Gavin.  Gianmaria Bruni in the No. 912 Porsche was third in class, but a full 1.5 seconds off of Pilet.  Ford Chip Ganassi Racing’s Richard Westbrook took the No. 67 Ford GT to fourth in class, followed by Dirk Müller in the No. 66.

33 of the 35 teams entered turned in laps during the session.  The sole holdouts were Tequila Patron ESM’s No. 2 Nissan DPi for Ryan Dalziel and Scott Sharp and Stevenson Motorsports’ No. 57 Audi for Lawson Aschenbach and Andrew Davis.  Aschenbach did an out lap during the session, but the No. 2 team chose to “stay in the warm garage.”  Since temperatures at Road America during the session hovered around 55 degrees, that’s fairly accurate.

IMSA WeatherTech SporsCar Championship teams have one more practice session scheduled on Friday.  It will be held starting at 5:10 p.m. EDT and last for one hour.