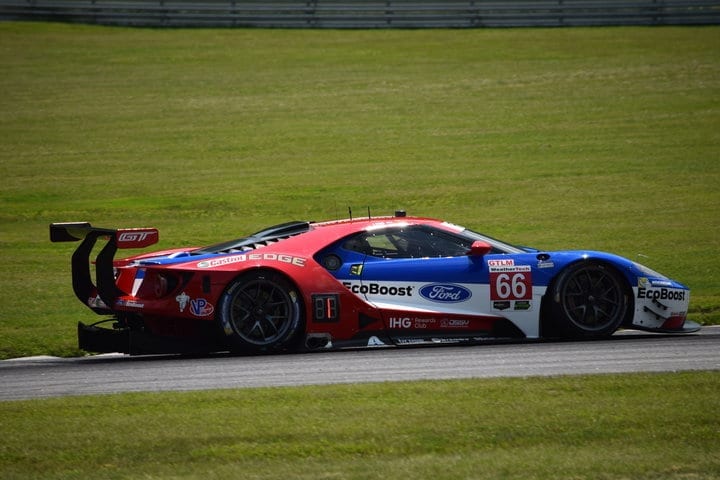 In opening practice for the IMSA WeatherTech SportsCar Championship at Lime Rock, Ford Chip Ganassi Racing’s Dirk Müller was fastest with a lap of 51.077 seconds (103.890 mph).  As is the norm in GT Le Mans, much of the class was clustered together.

Müller’s lap was nearly two-tenths of a second faster than teammate Ryan Briscoe in the No. 67 Ford.  Porsche GT Team’s Laurens Vanthoor was third quickest.  However, the Belgian racer had a bit of an adventure in his first on-track session at Lime Rock.  21 minutes in, Vanthoor lost control of his Porsche 911 RSR and spun exiting Big Bend.  Luckily, Vanthoor did not hit anything and was able to continue after a brief interruption.

Corvette Racing’s Antonio Garcia was fourth quickest, while Dirk Werner was fifth in the No. 911 Porsche.  The top seven GTLM teams were separated by less than seven-tenths of a second.

In GT Daytona, Park Place Motorsports’ Jörg Bergmeister was fastest with a lap of 52.818 seconds (100.465 mph).  The lap, which was three-tenths of a second fastest than last years’ class pole, was less than three-hundredths of a second faster than Katherine Legge in the No. 93 Acura.  Alegra Motorsports’ Daniel Morad was third quickest in the No. 28 Porsche, followed by Colin Braun in the CORE autosport Porsche.  Riley Motorsports’ Jeroen Bleekemolen was fifth quickest.

IMSA WeatherTech SportsCar Championship teams have one more practice Friday afternoon starting at 2:25 p.m.  The session will be one hour in length.