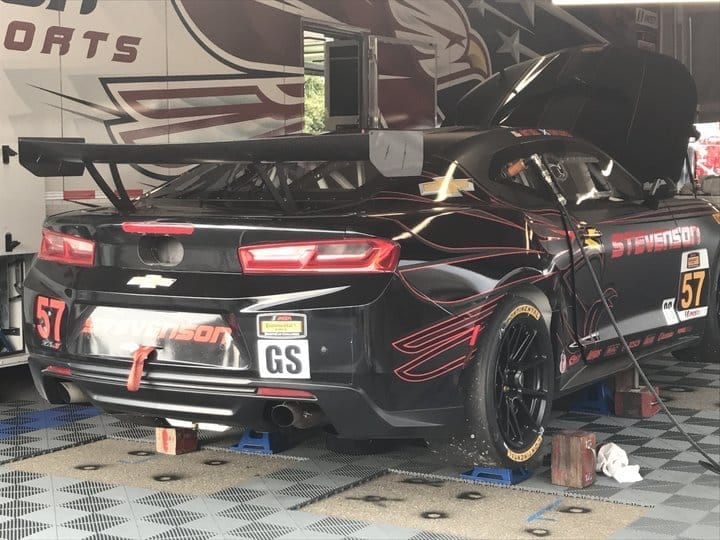 Afterwards, Bell was overjoyed given their pace all weekend.

“We’ve been off all weekend.  We lost by over a second in qualifying,” Bell told IMSA Radio’s Shea Adam after the race.  “[We] engineered this [Chevrolet Camaro GT4.R] to be as kind to the Continental tires.  That was the key.”

Bell and Liddell’s margin of victory was 6.462 seconds over Rennsport One’s No. 28 Porsche for Dillon Machavern and Dylan Murcott.  Motorsports in Action’s No. 69 McLaren for Chris Green and Jesse Lazare slowed on the last lap and dropped to third.  C360R’s Paul Holton and Matt Plumb finished fourth.  CJ Wilson Racing’s Till Bechtolsheimer and Marc Miller were fifth.

Early on, Motorsports in Action’s Green was the man to beat.  Starting from pole, Green and his No. 69 McLaren literally drove away from the pack.  A half-hour into the race, Green had a 15 second lead over Holton.  It was nothing more than solid lapping of the circuit.  However, the race’s sole full-course caution flew 53 minutes in when Jared Salinsky slid off course in turn 3 after contact with Bodymotion Racing’s Trent Hindman and went head-on into the tires.

Salinsky was ok, but as you can see above, his MINI was toast.  It will likely be quite the thrash to get the No. 52 ready for the next race.

Most of the field stopped under the caution for fuel, tire and driver changes.  The No. 69 retained the lead with Lazare now behind the wheel.  However, Lazare was given a drive-through penalty shortly after the restart for failing to properly slow to safety car speed when Green was still in the car.  Green’s action likely prolonged the full course yellow since it took much longer to bunch the field together then it should have.

Liddell’s plan was to stretch his fuel all the way from his pit stop under yellow.  Other drivers chose to make a second stop in order to top off.  Late in the race, Liddell was forced to conserve fuel while many of the other contenders didn’t have to.  Lazare dropped to fifth after the penalty, but slowly rose back into contention late.  Lazare was able to get within two seconds of the Camaro before dropping back with his own issues late.

Street Tuner ended up being an outright duel for most of the second half of the race.  MINI JCW Team’s James Vance, Murillo Racing’s Eric Foss and CRG-I Do Borrow’s Owen Trinkler were evenly matched with each other, but faster than everyone else.

Vance led until Foss made an ultra-aggressive move at Moss Corner with five minutes to go.  Foss went to the inside of Vance, caught the curb and bounced into Vance.  Vance got loose and nearly spun out before recovering.  However, he would drop to third.

From there, Foss pulled out a small margin and held on to take his (and co-driver Jeff Mosing‘s) second win of the year.  At the time, Foss’ move was considered to be rather controversial and officials reviewed the video of the contact.  They decided not to issue a penalty.  If that changes, we will update this recap.

Mosing, who is still recuperating from a back injury suffered at Watkins Glen, was all smiles.

“[Eric] Foss got out there and did what he needed to do,” Mosing said to IMSA Radio’s Shea Adam.  “During the long green-flag session, [Foss] is really good at conserving the Continental tires for us.  Because of that, we had something for them at the end.”

CRG-I Do Borrow’s Trinkler and Sarah Cattaneo ended up second, 1.441 seconds back.  Vance and teammate Mike LaMarra had to settle for third.   JDC/Miller MotorSports’ Michael Johnson and Stephen Simpson were fourth, the best finish in ST for the BMW 228i.  BimmerWorld Racing’s James Clay and Tyler Cooke ended up fifth.

The IMSA Continental Tire SportsCar Challenge will be back in action in two weeks at Lime Rock Park in Connecticut.  Frontstretch will be there to cover all the action from the bullring.