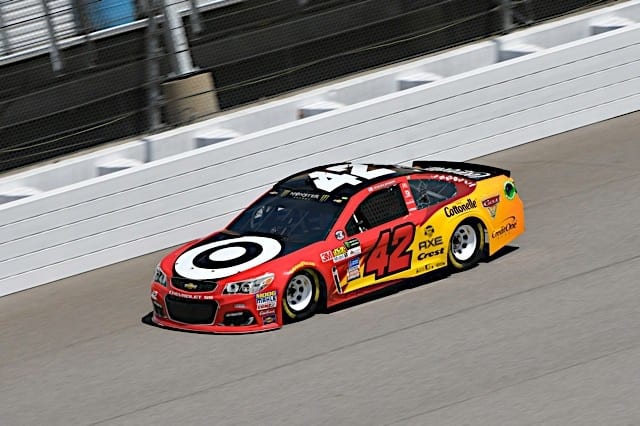 Kyle Larson proved he had the fastest car at Michigan International Raceway Friday, winning his third career pole. Less than three days later, he backed it up, leading a race-high 96 circuits en route to his second-career victory at the speedway.

Larson led the majority of the opening stage before Martin Truex Jr. captured the stage victory. The No. 42 car crossed the green-checkered flag in the runner-up position. In the second stage, it was much of the same as the No. 42 team led the way.

But with four laps in Stage 2, the No. 78 car got by for another stage victory, Larson falling to third.

When the third stage began, strategy began to play a factor and Larson fell to as low as eighth. However, through a rash of cautions toward the end of the event, the No. 42 car restarted underneath Kyle Busch with 15 laps to go. Larson had to keep the lead through two final restarts due to separate incidents as he attempted to re-enter Victory Lane at Michigan.

With five laps remaining, Larson edged Denny Hamlin into Turn 1, picking up his third career victory in the Cup Series, each coming in the last three races on the 2-mile tracks.

“For us to withstand a few restarts there with some tough competitors there was pretty important,” Larson said of his victory. “We’ve been so close to so many other wins. This is our second Cup win of the year, but we’ve had six second place finishes. All-in-all, it’s a good season so far and we’ll continue to keep building on what we’ve got.”

Larson heads to his home track next week at Sonoma Raceway, in which he has a best finish of 12th in three starts.

Chase Elliott came home second for the third time in as many races at Michigan. Throughout the day, he was running in the top 10. With a series of restarts, the No. 24 car got as high as second, never passing Larson.

“From where we started the day to where we ended up, I’m pretty proud of the effort,” Elliott said. “I really think we overachieved today with what we had. Last night I was pretty nervous about how the day was going to go. I’m happy that we just had a solid day and put ourselves in position on late race restarts.”

After finishing outside the top 20 in five consecutive races, 2016 Michigan winner Joey Logano brought home the No. 22 car in third, having the freshest tires toward the front of the field. With 21 laps to go, crew chief Todd Gordon called him to pit road, restarting outside of the top 15. In the final 15 laps, he jumped up to third, passing Hamlin with four laps remaining.

“It’s been a struggle the last month-and-a-half and it’s nice to come here to Michigan, maybe our best race track and be able to overcome a lot,” Logano said. “I’m not sure we had a third-place car today but the team executed like they needed to.”

Restarting on the bottom for nearly every restart was the Achilles heel for Truex and the No. 78 team. Falling outside of the top 10,  he raced his way back up to sixth. Busch, Ricky Stenhouse Jr., Dale Earnhardt Jr. and Jimmie Johnson filled out the top 10.