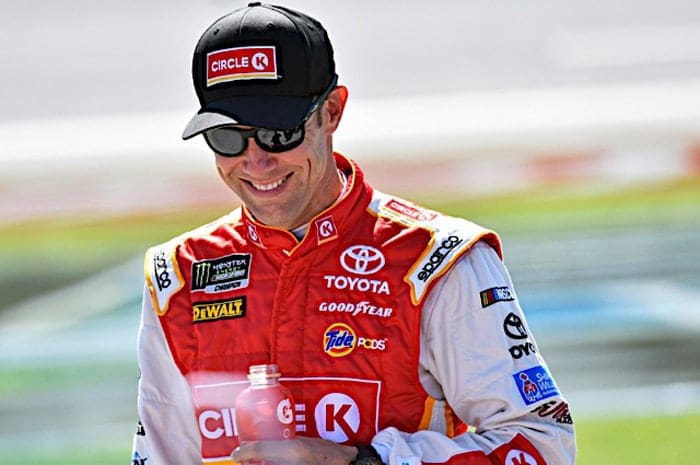 The Monster Energy NASCAR Cup Series heads to Michigan International Speedway for the FireKeepers Casino 400 this Sunday afternoon at 3 p.m. ET. Your daily fantasy NASCAR team will now be faced with the prospect of conquering this two-mile oval that is one of the fastest on the circuit. Cars hit the track on Friday at 11 a.m. for first practice and then at 4:15 p.m. for Coors Light Pole Qualifying.

This week’s fantasy forecast is backed by DraftKings, the No. 1 platform for daily fantasy sports. You can jump in on all of the daily fantasy NASCAR action at Michigan this weekend by signing up here for a free entry into one of this weekend’s contests. All you have to do is make a $5 deposit to get started!

Kyle Larson won the second stage of the race at Pocono Raceway last weekend and finished the race in seventh. The result was Larson’s ninth top-10 performance through 14 races.

Larson picked up his first career Monster Energy NASCAR Cup Series win at Michigan last August. In that race, he also led 41 laps. In the spring race, Larson ran third, giving him an average finish of 2.0 for the track in 2016. Only Chase Elliott, with two runner-up performances was able to match Larson’s strength at MIS last year.

Larson has led laps in four of the six races he has run at Michigan. Expect him to run toward the front yet again and contend for another win.

Martin Truex Jr. kept his hot streak alive with another top-10 finish last week; interestingly enough, the sixth-place finish at Pocono was his worst in the past four races.

2016 was a year of up and downs for Truex and Furniture Row Racing at Michigan. He led laps in both MIS races but failed to finish within the top 10 in either contest. 2015, on the other hand, saw him finish third in both events.

Truex is the king of the intermediate track over the past two seasons, which means a revitalization at Michigan should be on the horizon. He and Larson have a lead of over 100 points over every driver in the Cup Series standings and should be mainstays on the DraftKings roster each week at this point.

In typical Paul Wolfe fashion, the No. 2 team gambled late in the race at Pocono. Using pit strategy, what was merely a top-1o car suddenly found itself restarting second after the final caution. However, the Miller Lite Ford just didn’t have the speed to compete with Kyle Busch and Ryan Blaney.

While a win proved elusive, they should be able to package that momentum going forward. Heading into Michigan, Brad Keselowski is one of the favorites to win on Sunday. After all, he has not finished outside the top 10 at the track since 2013 or outside the top 15 since 2011.

Chase Elliott was the lone Hendrick Motorsports driver to finish the race at Pocono. The three other HMS Chevrolets fought brake issues, and their days ended in disaster, while Elliott finished eighth.

Elliott’s performances at Michigan during his rookie season could only have been better if he were able to secure a trip to Victory Lane. His two second-place finishes result in a high price tag for the second-year driver.

It’s worth it. That illustrious first win has eluded Elliott to this point, but Michigan could be the track that changes his luck. A win Sunday by rival Ryan Blaney, combined with past success here should motivate the second-year driver to get over the hump. This season has been all about first-time winners, so why stop now?

Matt Kenseth has not had the start to 2017 that he was hoping for. He ranks 13th in the series standings and is still winless as the 45-year-old’s future for 2018 and beyond remains a source of speculation.

Luckily for Kenseth, he is tied for the most wins among active drivers at Michigan with three. That means he has the potential to score his first win of the season for a Joe Gibbs Racing team that has yet to see any of its four drivers take the checkered flag first.

Two of Kenseth’s three top-five finishes this season did come on intermediate tracks. That makes him a sneaky darkhorse pick to run well Sunday.

Denny Hamlin followed up two straight top-10 finishes with a 12th place at Pocono last weekend. He has six top-12 finishes in his last seven races, working himself out of an early-season hole. Hamlin is slowly finding his groove and has been running more consistent across all tracks as of late.

At Michigan last season, Hamlin was involved in a late-race wreck during the spring race and finished 33rd. He was running within the top 15 when the crash happened. In the fall, he left with a ninth-place result. Expect another top-10 result on Sunday.

Blaney won over America’s heart with his win at Pocono last weekend. Not only did he win the race, but he also outdrove two of the best drivers the sport has ever seen in Kyle Busch and Kevin Harvick.

Blaney has progressively gotten better at Michigan in every race he has run here. A pair of 24th-place finishes in 2015 were part of only a handful of events he ran that season. In 2016, he finished 17th in the spring and charged his way to a fourth-place finish in the fall.

Blaney has momentum this week and has been racing as good as anyone lately. He has the steam under the hood and the aggressiveness on track to race with anyone. Unafraid to ruffle feathers, he is an emerging star in this sport and a name to look at every week from here on out.

Kurt Busch followed up an embarrassing Dover International Speedway performance with a fourth-place finish at Pocono. We all know the struggles he faced during the earlier portions of the season, but in the past eight races, he has five top-10 results.

Busch is the other driver tied with Kenseth for the most active Michigan wins with three. He also ranks second behind Jimmie Johnson in laps led by active drivers (448).

Busch finished 10th after starting 17th last spring and ran 12th after qualifying 19th in the fall. He is on pace to follow those up with another finish in the top half of Sunday’s field.

Austin Dillon’s win at Charlotte Motor Speedway locked him into the playoffs, and his 13th-place finish at Pocono has put him inside the top 20 in series points. Clearly, the No. 3 has been able to turn their season around since that surprising upset in the Coca-Cola 600.

Dillon has led laps at Michigan each of the past three years. He has two top-10 finishes in the last three Michigan races, including a fourth-place performance in August 2015.

Dillon is priced fairly cheap for the tail end of lineups and has one win and two 13th-place finishes since being assigned a new crew chief. Expect he and Justin Alexander to keep building chemistry with a solid run on Sunday. 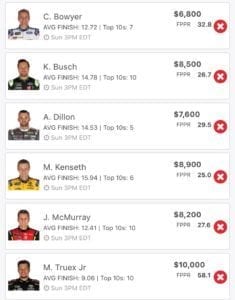