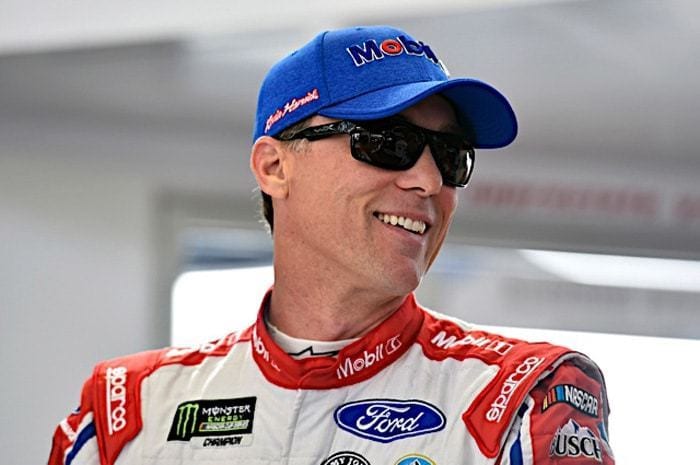 Next up for daily fantasy NASCAR players is Kansas Speedway. The Monster Energy NASCAR Cup Series heads to the 1.5-mile oval for the Go Bowling 400 this Saturday night at 7:30 p.m. Cars hit the track on Friday at 11:30 a.m. for first practice. Then, at 6:45 p.m. that same day they have Coors Light Pole Qualifying.

This week’s fantasy forecast is backed by DraftKings, the No. 1 platform for Daily Fantasy Sports. You can jump in on all of the daily fantasy NASCAR action at Kansas this weekend by signing up here for a free entry into one of this weekend’s contests. All you have to do is make a $5 deposit to get started!

Harvick has an incredible record at Kansas since moving to Stewart-Haas Racing in 2014. In six races, he has four top-five finishes. Three of those were second places, earned in each of the past three seasons. The other was a win in the fall race of 2016.

In that victory, Harvick charged forward from the 11th place starting spot. He also led 74 of 267 laps, second most to Matt Kenseth.

That makes him a solid pick, in particular when you study the 2014 champion’s career numbers. Harvick is second among all active drivers in average finish position at Kansas and ranks third in laps led. If Harvick starts towards the front, he has high dominator potential.

Johnson sits atop most categories when it comes to Kansas, the type of consistency you’d be looking for. He is tied with Jeff Gordon in most all-time wins with three. He is second all-time behind him with nine top fives and owns the most top-10 finishes in track history with 17 in 21 starts. His 8.9 is also the best average finish among all active drivers.

Johnson hasn’t won at Kansas since the spring of 2015, but he does have two top-five results in the three races since. His 17th-place finish in the spring race last season is one of only two results outside the top 10 since 2006.

Truex has arguably been the best Cup Series driver on 1.5-mile tracks over the past year and a half. He led the most laps on intermediate tracks last season, earning three victories. He’s already picked up a win at one in 2017 (Las Vegas).

In the past ten races at Kansas, Truex is averaging a 10th-place finish, six positions higher than his career average. He led 172 laps in the spring race last season, over 100 more than the eventual race winner, Kyle Busch.

Truex sits second in series points, leading laps in six of ten races held thus far. Chances are he’ll be ready to bounce back after a Talladega wreck ruined his Sunday.

Busch finally crossed Kansas off on the list of tracks he had yet to win at with a first-place finish in the spring race of 2016. He led 69 laps in that event, one of four straight top-five finishes at a place he used to hate.

In fact, Kyle has led at least one lap in four of the last six Kansas races. His average finish of 18.4 is skewed by a three-race stretch from 2012-13, in which he wrecked out of all three. In the past four races he has run at the track, Kyle’s worst finish is fifth place.

The younger Busch was one lap shy of picking up his first win of the season at Talladega last weekend. Expect him to try and make up for it Saturday night.

Kenseth has the most laps led all-time at Kansas with 774. He has led laps in nine of the past ten races, including the most in the fall event last season. Kenseth won from the pole here in 2013 and led 163 laps. That win was the second of two in a row, his first successful trips there with Joe Gibbs Racing.

So far, 2017 has not been the season that Kenseth was hoping for. He sits 19th in the standings and has three DNFs through 10 races. On the bright side, he sealed the pole at Richmond and led the most laps of the race (164). He then led four laps at Talladega and was a contender until The Big One.

It looks like the No. 20 team is back on the upswing and Kansas will be no exception.

Even though Blaney only has four career MENCS starts at Kansas, it is one track on the circuit where he has the most experience. While racing part-time in 2015, he made starts in both races at the track. In the first race, he finished 27th. But when the series returned in the fall, Blaney picked up a seventh-place result. Last season, he set a career high fifth-place performance before slipping a bit to 14th last time out.

Blaney has been all or nothing so far this season. He is aggressive, which has landed him in some trouble after a strong start. While he does have three top-10 finishes, he also has two straight DNFs which has hurt his playoff standing.

If Blaney can manage to race cleanly, he would be a strong candidate for a finish of 15th or better.

Kahne picked up his second top five of the season last weekend at Talladega. 2017 has already been a big improvement over 2016, where he was one of two full-time drivers not to lead a lap all season.

Yet, even with the struggles, Kahne ran well at Kansas in both appearances. In the spring, he started 27th and finished 16th. Then, in the fall, he picked up a tenth-place finish. Looking at both races, he totaled at least 10 positive position differential points each time out.

Kahne has proven that even if he starts outside the top 20, he can fight his way to the front. Let this intermediate track specialist work for you.

Newman has six straight top-15 finishes at Kansas. He finished seventh in the spring race and 12th in the fall last year. Newman already has one win this season, paired with three top 10s. He has led laps in four out of ten races run in 2017.

Newman was one of three cars involved in the wreck that sent last weekend’s race into overtime. He ran as high as first place and was running fifth at the midway point before falling back. Despite being a critic of plate racing the team still enters Kansas with plenty of momentum.

Clearly, the No. 31 has more speed than its Richard Childress Racing teammates thus far. Newman has also shown this season that when he runs up front, he is tough to pass. On intermediate tracks, if this veteran starts within the top 10, he could be a low-cost dominator candidate.

Stenhouse was as dominant as possible at Talladega. At a track and race that was full of mayhem, he started on the pole, led 14 laps, and picked up his first career MENCS win in thrilling fashion.

Two straight top fives and five top 10s in the past seven races for Stenhouse make him incredibly underpriced at $7,400. Roush Fenway Racing has improved as a team in 2017, but Stenhouse himself has stepped up to another level. He is now locked into the playoffs and could be an underdog pick for more wins this season.

JOIN DRAFTKINGS AND SET YOUR OWN!