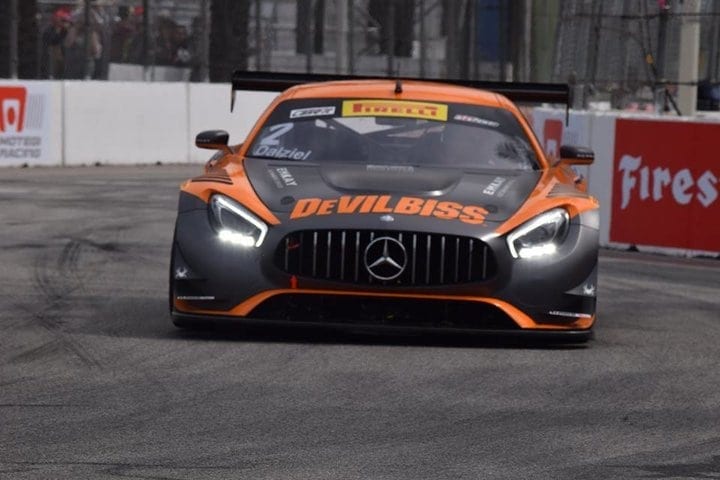 This past weekend, VIRginia International Raceway was witness to two very interesting Sprint-X races.  The first one was fraught with issues brought on by the rules, while the second was much calmer.

Despite a number of other teams showing exceptional pace in the race, penalties to a number of top teams resulted in TR3 Racing’s Daniel Mancinelli and Andrea Montermini taking the overall win in a topsy-turvy race.  It is TR3 Racing’s first-ever victory in Pirelli World Challenge.

McCann Racing’s Mike Skeen scored a surprising pole on Friday and showed the McCann Audi’s pace was no fluke, leading early on.  However, Skeen spun out of the overall lead just prior to the round of mandatory pit stops while trying to deal with a lapped car.  The stops turned the race upside-down.

Five minutes into the pit window,  Mancinelli and Magnus Racing’s Pierre Kaffer were racing each other for the overall lead heading towards the Climbing Esses.  Mancinelli, who has had multiple instances of contact in 2017, had contact with Kaffer, spinning both drivers out.

Mancinelli was able to resume, but suspension damage to Kaffer’s Audi effectively ended his day.  The team was able to make repairs, but the duo of Kaffer and Spencer Pumpelly finished five laps down in 22nd.

A full course yellow closed the pack up, then the bombshell was dropped on the field.  A number of the top teams (CRP Racing’s No. 2 Mercedes for Ryan Dalziel and Daniel Morad, Cadillac Racing’s No. 3 for Johnny O’Connell and Ricky Taylor, Wright Motorsports’ No. 58 for Patrick Long and Jörg Bergmeister, and the No. 61 R. Ferri Motorsport Ferrari for Kyle Marcelli and Alex Riberas) were busted for pit violations.  Specifically, each team was found to have violated the 60 second minimum pit time.  They were all forced to do drive-through penalties under green in the final 15 minutes of the race.

The beneficiary of the penalties turned out to be the same TR3 Racing Ferrari that spun early.  The No. 31 Ferrari, now driven by Montermini, had to hold off a charging Andrew Davis in the McCann Audi for the win.

Behind Montermini and Davis was Cadillac Racing’s No. 8 for Michael Cooper and Jordan Taylor in third.  Dalziel and Morad in fourth were the best placed of those teams that were penalized.  Long and Bergmeister were fifth.

In Pro/Am, the Always Evolving Nissan of Ricardo Sanchez led from the pole, but ran into mechanical woes.  That gave the lead to the GMG Racing No. 14 Porsche for James Sofronas and Laurens Vanthoor.  With Vanthoor at the wheel in the second half of the race, the No. 14 charged to the front, eventually finishing third overall and winning the class…or so they thought.

Hours after the race, the No. 14 Porsche was assessed a drive-through penalty after an analysis found that they had passed under yellow.  Since it was after the race, a time penalty of 40 seconds was added to Sofronas and Vanthoor’s time.  The penalty dropped the No. 14 from third to tenth overall and to third in Pro/Am.

Inheriting the Pro/Am win as a result was the No. 16 Wright Motorsports Porsche of Jan Heylen and Michael Schein who finished third overall.  The win came despite causing a spin late in the race that led to Pirelli World Challenge officials assessing a three-spot grid penalty for Race No. 2.

Heylen and Schein were 14.4 seconds ahead of Absolute Racing’s Yufeng Luo and Alexandre Imperatori in second.  Sofronas and Vanthoor were third, then Preston Calvert and Alec Udell in the GMG Racing/Calvert Dynamics Porsche were fourth.  K-PAX Racing’s Mike Hedlund and Michael Lewis were fifth.

In Am/Am, Kris Wilson and Drew Regitz claimed the division victory in their Aston Martin Vantage GT3.  Due to the positioning of the overall leaders, the margin of victory was a lap over the NGT Motorsport Ferrari of Henrique Cisneros and Tyler McQuarrie. GT Cup was won by the Dream Racing Motorsport Lamborghini Huracan Super Trofeo of Alessandro Bressan and Yuki Harata.  Finally, GTS was won by Stephen Cameron Racing’s Ari Balogh and Greg Liefooghe.

The second Sprint-X race had Black Swan Racing’s Jeroen Bleekemolen on polJae by virtue of setting the fastest lap of Saturday’s race.  However, his time up front was very brief.  On the start of the race, CRP Racing’s Morad used the outside line in turn 1 to take over the lead.  Bleekemolen gave chase.  Meanwhile, a pack of drivers staged a huge fight for third further back.

The whole race was turned upside down by a crash for Alec Udell in the GMG Racing No. 77 Porsche.  While Udell was ok, the crash caused a full course caution just a couple of minutes before the pit window would have opened.  As a result, the strategy in regards to when to pit was all over the place.

In a somewhat unusual instance, Long’s No. 58 was rear-ended by Magnus Racing’s No. 44 of Marco Seefried under caution.  The contact ultimately damaged the Porsche, ending their race.  Seefried’s Audi had a damaged nose, but was able to continue.  Pirelli World Challenge officials levied a post-race drive-through penalty against the No. 44 for the incident.

Teams such as K-PAX Racing, Cadillac Racing and TR3 Racing pitted the lap after the green came back out.  Morad kept the CRP Racing Mercedes out for a few extra laps along with Bleekemolen to stretch out the gap.  Since Bleekemolen was racing in the Pro/Am class, Morad knew that the No. 54 Mercedes wouldn’t play a role in his race due to the different pit rules.

Once he got in the car, Dalziel inherited a 12 second lead over the rest of the field.  From there, it was clear sailing for the Scottish veteran.

The race came to a premature end due to a huge crash involving the Am/Am Ferrari of Stefan Johansson and the No. 018 GTS class Porsche Cayman driven by Philip Bloom.  Damage was done to the guardrail, forcing an early end to the race.  Dalziel and Morad claimed overall victory, the first win in Pirelli World Challenge for the Mercedes-AMG GT3.

K-PAX Raicng’s Alvaro Parente and Ben Barnicoat ended up second overall, followed by Cadillac Racing’s No. 8 for Cooper and Jordan Taylor.  Mancinelli and Montermini finished fourth in a much quieter run while Kaffer and Pumpelly were fifth.

In Pro/Am, Bleekemolen running away from the pack with Morad at the start gave Black Swan Racing a huge advantage.  Given the rules, the team could not contend for the overall win.  However, once team owner Tim Pappas took over, Bleekemolen had spotted Pappas a substantial advantage over the rest of the pack.  Despite Pappas not being able to touch Bleekemolen’s pace, he was still able to bring the No. 54 Mercedes home tenth overall.  That was more than good enough to win the Pro/Am division.

GMG Racing’s Sofronas and Vanthoor finished second in class, followed by Schein and Heylen.  K-PAX Racing’s Hedlund and Lewis were fourth while Luo and Imperatori were fifth.

In Am/Am, it was NGT Motorsport’s McQuarrie and Cisneros who took the division victory over The Racers Group’s Wilson and Regitz.  Dream Racing Motorsport’s Bressan and Harata swept GT Cup, while Balogh and Liefooghe did likewise in GTS.

This past weekend’s Sprint-X action from VIR can be seen in tape-delayed form on CBS Sports Network on May 7 at 6 p.m.