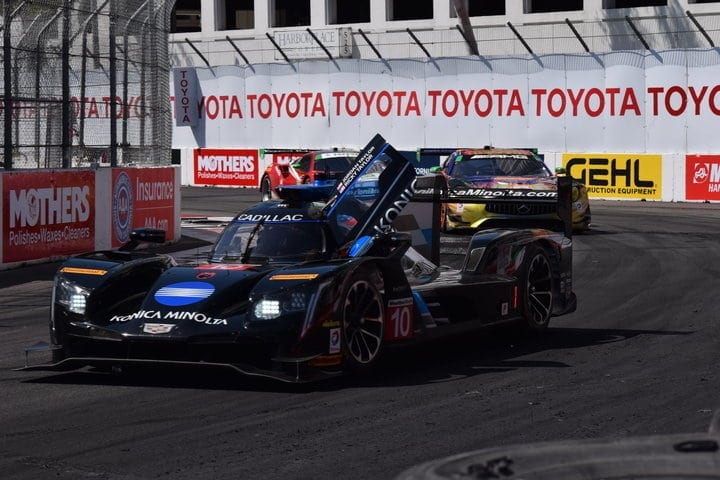 On Saturday afternoon, Wayne Taylor Racing’s Jordan Taylor passed Tequila Patron ESM’s Ryan Dalziel with ten minutes to go.  From there, the Altamonte Springs, Fla. native pulled away to take the overall victory in the BUBBA Burger Sports Car Grand Prix at Long Beach.  For the Taylor brothers (Jordan and Ricky), it is their third consecutive win to start the season and their third straight overall win at Long Beach.

Despite the ease that Jordan Taylor was able to pull away at the end, it was really the traffic that gave him a chance at the win.

“We knew when the yellow came out and the 2-car would cycle to the lead — we had the fastest car all weekend — but when we saw how fast Ryan was going we knew it was going to be a battle,” Jordan Taylor stated during the post-race press conference.  “It’s difficult to judge where to brake when you’re off line, so when we hit traffic I was able to take advantage when a GTD car took the same line as Ryan and I had the open track.”

Saturday’s 100-minute race was one of the most destructive sports car street races in recent memory.  There were five full course cautions during the race, four of which were for wrecks.

The wrecking occurred early and often.  On the first lap, Ed Brown spun the Tequila Patron ESM No. 22 in turn 5 after getting hit by Risi Competizione’s Toni Vilander.  The resulting stack-up caught up Ford Chip Ganassi Racing’s Joey Hand and Corvette Racing’s Jan Magnussen, the top three qualifiers in GTLM.

Brown drove away on his own and made it back to the pits on his own, but did not return to the race.  Vilander was also out on the spot.

Saturday was a terrible day for Action Express Racing.  Christian Fittipaldi was running second early, but had contact with the WeatherTech Mercedes of Gunnar Jeannette entering turn 9.  Fittipaldi spun and backed into the tires to bring out the yellow.

After repairs, the No. 5 continued with Joao Barbosa at the wheel.  They ultimately finished seventh in class, two laps down.

Teammate Dane Cameron ended up having the biggest crash of the day.  Cameron clipped the inside wall in turn 8.  That impact bounced Cameron hard into the outside concrete wall.

Cameron walked away from the crash, but the No. 31 Cadillac DPi-V.R. was heavily damaged.

The fourth full course caution brought the leaders to the pit lane for their final stops.  Dalziel won the race off pit road thanks to an alternate strategy.  However, due to all the time spent behind the pace car, Dalziel ended up 19th overall.

It did not take long for the leaders to get through the field.  Dalziel took the overall lead the first lap after the restart from the Cameron crash with 36 minutes to go.  From there, the race was on between Dalziel and Jordan Taylor.

Behind the Taylors and Dalziel was the No. 55 Mazda of Tristan Nunez and Jonathan Bomarito in third, 15 seconds back.  JDC/Miller MotorSports’ Mikhail Goikhberg and Stephen Simpson were fourth, while PR1/Mathaisen Motorsports’ Tom Kimber-Smith and William Owen were fifth.

In GTLM, Laurens Vanthoor ended up with the class lead after the first lap crash.  From here, Vanthoor held the class lead until a round of stops under green just after the third full course caution.  BMW Team RLL’s No. 24 of Martin Tomczyk took an alternate strategy and ended up taking the class lead as a result.  The Prototypes stopping during the fourth yellow gave Tomczyk the overall lead until Dalziel ran him down.

Despite losing the overall lead, Tomczyk was still strong until he suddenly slowed with 12 minutes remaining.  That gave the lead to Corvette Racing’s Antonio Garcia in the No. 3 Corvette.

Ultimately, the GTLM race was decided by completely outside means.  GTD drivers Robert Alon, Jens Klingmann and Jeff Segal all collided in the hairpin while fighting for position on the final lap.  The wreck happened approximately 20-25 seconds ahead of the GTLM leaders.

By the time the leaders got to the wreck, the track was blocked.  Garcia couldn’t go anywhere, and neither could Tommy Milner in the No. 4 Corvette or Ryan Briscoe in the No. 67 Ford.  However, the PR1/Mathiasen Motorsports No. 52 Prototype of Kimber-Smith was able to get back going.  This opened up a hole and allowed Milner to pull through.  That hole opening up allowed Milner and teammate Oliver Gavin to pull through and take the victory.

Briscoe and Richard Westbrook ended up second, followed by Vanthoor and Kevin Estre.  The No. 25 BMW of Bill Auberlen and Alexander Sims finished fourth, while the No. 3 Corvette of Garcia and Magnussen had to settle for a disappointing fifth.

In GTD, pit strategy ultimately decided the class for the day.  Paul Miller Racing’s Bryan Sellers led early on through the first two full course cautions. During the second yellow, WeatherTech Racing’s Cooper MacNeil came in for full service, including a driver change to Jeannette.  Having started at the rear due to a tire change, they figured that they didn’t have anything to lose.

During the third full course caution, Sellers made a big mistake and pitted while the pits were closed.  A stop + 60 second hold penalty later on dropped the team out of contention.  Additional problems dropped the No. 48 Lamborghini to 16th (last) in GTD, nine laps down.

3GT Racing’s Jack Hawksworth assumed the lead as a result of Sellers’ error, but stopped three laps after the restart.  That gave the lead over to Jeannette.

Pit stops for the Prototypes put Jeannette all the way up to fifth over with 58 minutes to go.  From there, Jeannette dropped down the overall order, but kept an iron grip on the GTD lead.

Jeannette and Riley Motorsports teammate Jeroen Bleekemolen pulled away from the field after the final restart to take a one-two finish.  The WeatherTech No. 50 Mercedes of Jeannette ended up 7.492 seconds ahead of Bleekemolen at the finish.

Scuderia Corsa’s No. 63 Ferrari of Christina Nielsen and Alessandro Balzan.  Fourth went to the Park Place Motorsports Porsche of Jörg Bergmeister and Patrick Lindsey despite contact with the Change Racing Lamborghini in the closing minutes in turn 9.  Jeroen Mul spun the No. 16 Lamborghini and was hit by the No. 70 Mazda of Joel Miller.  The TRG Porsche of Wolf Henzler and Jan Heylen rounded out the top five.

The IMSA teams take a few weeks off before the fourth race of the season at Circuit of the Americas.