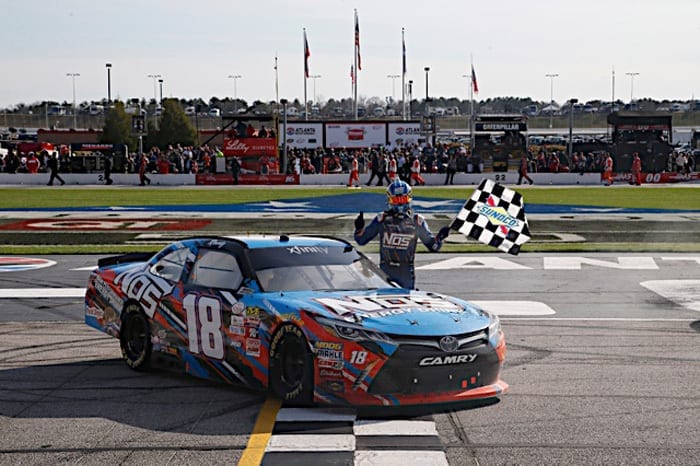 Qualifying for the XFINITY Series Boyd Gaming 300 from Las Vegas Motor Speedway was a battle for supremacy between Cup Series owners Roger Penske and Joe Gibbs. Joey Logano, Brad Keselowski and Kyle Busch dominated the top of the leader board through all three sessions of qualifying, but the final result remained in doubt until the final laps of round No. 3.

After blistering the field with a lap time four-tenths clear of his nearest competition in the first round, Keselowski put up a lap of 29.117 seconds (185.459 mph) for everyone to shoot at.  It held up against all comers.  That was until Busch took his No. 18 on to the racing surface.

The Las Vegas, Nev. native piloted his NOS Energy Drink Camry around the speedway in a time of 29.098 seconds (185.580 mph), taking the pole for his hometown event in NASCAR’s junior series. This is Busch’s second Coors Light Pole Award of 2017.

Daniel Suarez, Busch’s teammate at Joe Gibbs Racing slotted in third, with Logano and Austin Dillon completing the top five. Matt Tifft will start sixth this afternoon in the third Gibbs Toyota, while Kyle Larson, Daniel Hemric, Ty Dillon and Ryan Reed round out the top 10.

The XFINITY Series Boyd Gaming 300 at Las Vegas Motor Speedway can be seen today at 4 p.m. on Fox Sports 1.