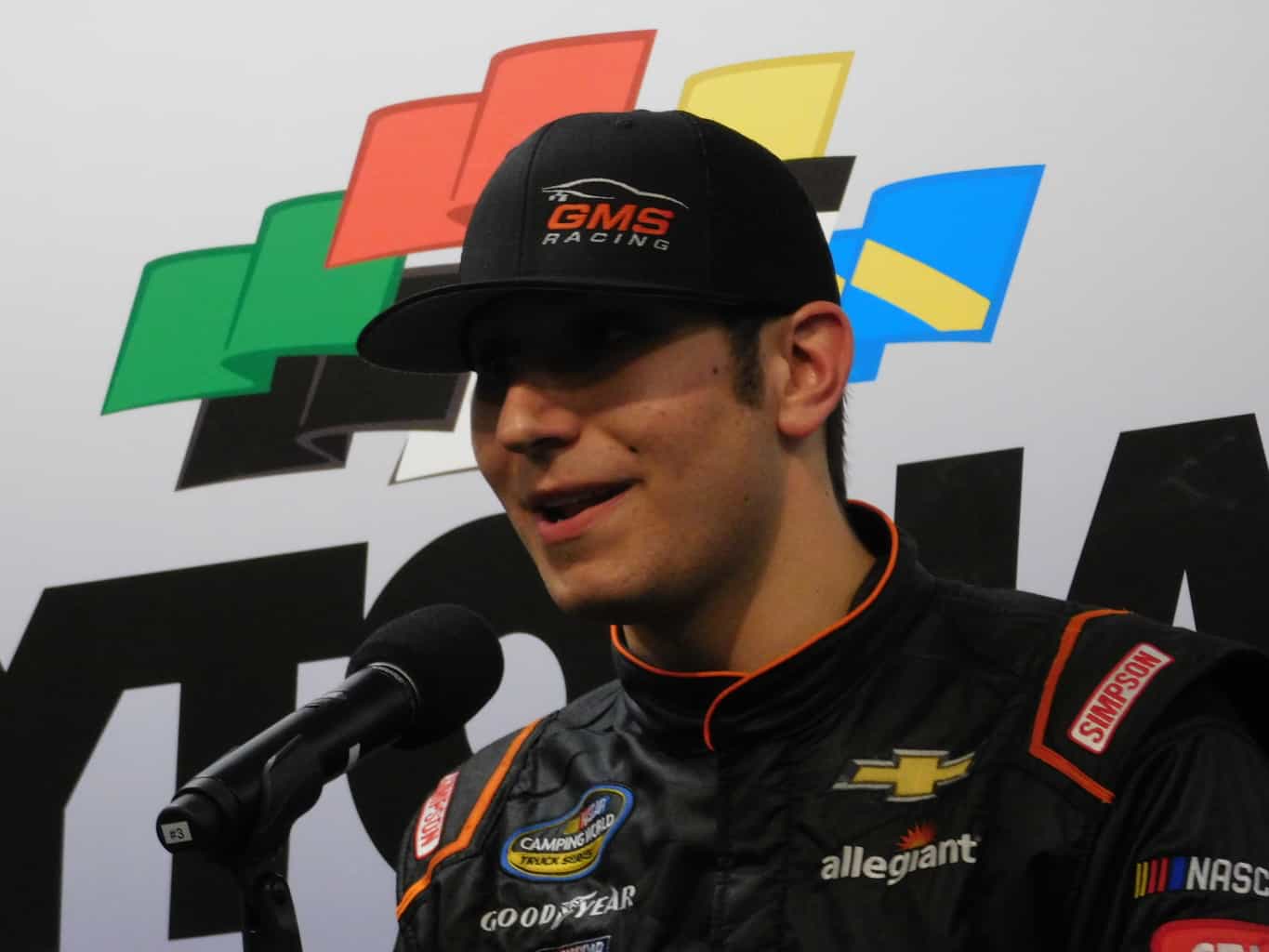 In some ways, Friday’s NextEra Energy Resources 250 at Daytona International Speedway was 2016 all over again. You had a GMS Racing truck headed to Victory Lane with a fellow competitor flipping in his wake.

It’s just that the driver holding the trophy now wasn’t even a full-fledged adult this time last year.

Pole-sitter Kaz Grala was Friday night’s surprise winner, the youngest ever at Daytona for a NASCAR national series race. At 18 years, one month, and 26 days he survived a massive last-lap wreck that saw Matt Crafton pirouette down the backstretch, grabbing his first career Camping World Truck Series victory in incredible fashion.

“That was a crazy finish to the race for sure,” Grala said. “I was just pushing Timothy Peters in front of me, I couldn’t see much ahead of me. I did see stuff start to go wrong and I knew I wasn’t going to lift off the throttle. I turned left, closed my eyes and crossed my fingers. I’m really glad it worked out.”

Finishing second was Austin Wayne Self, who punched through the crash to earn his best finish in just 23 career Truck starts. Rookie Chase Briscoe recovered from his role in a Lap 2 wreck to run third followed by the Nemecheks, Joe Hunter and father Joe to round out the top five finishers.

A race known for aggressive competition, it didn’t take long for the Big One to rear its ugly head.  Briscoe made contact with Noah Gragson at the start of Lap 2, triggering an 11-car incident that wiped out over a quarter of the field. Among those involved were Austin Cindric, Stewart Friesen, and Ryan Truex.

“It’s really tight racing here,” said Gragson. “I knew there was going to be a Big One, just didn’t know it would happen so early. I had a fun time for the lap I got.”

ALBINO: Truck Series Starts Off With A Bang

Despite its size, the early carnage was no match for Crafton’s airborne ride on the last lap. Flipping once over, Crafton landed on all four wheels and slid to a stop.

“It was really crazy,” Crafton said. “We were three-wide, I was watching the mirror and we started getting away from Johnny. Just when I saw that, I saw the No. 27 getting turned. Just about that time, I felt it turn right and I was like ‘Oh, this is not good.’ And then you feel that light sensation and you know what’s going to happen from there.

“I’m very happy it only went over one time. The race just crazy, chaos. There was just stupidity all night, to say the least. I don’t know how they didn’t wreck more, to be honest. ”

One driver who didn’t have to worry about accidents – at least early – was Johnny Sauter, the defending Daytona champion who dominated the night. Winning both stages, he led a race-high 52 laps and was in position to be the first repeat winner of this race since Todd Bodine in 2008-09.

But a late move in the draft left Sauter wrecked, his bid for a repeat ending in backstretch chaos.

“Everyone is doing what they have to do. I guess I didn’t do a good enough job,” Sauter said. “I thought I was clear of the wreck and, all of a sudden, I was turned sideways. I don’t know who got into who.”

Sauter got shuffled out of position by veteran Crafton in a frantic final few laps. After failing to make the block, he was caught in the middle line and had nowhere to go when Grant Enfinger and Ben Rhodes had a bad bumpdraft coming out of Turn 2. Rhodes lost control, triggering an eight-car wreck where the lead pack was wiped out with the exception of the trucks on the bottom line.

That opening allowed Grala, shuffled backwards a chance to sneak through and take the victory. Self and Briscoe followed right through but had no time to make a move as NASCAR threw the caution on the backstretch.

Regan Smith, running for the part-time No. 92 team, Scott Lagasse Jr., Christopher Bell, JJ Yeley, and Myatt Snider rounded out the top-10 finishers. Grala starts the season with a 14-point lead over Sauter in the standings.