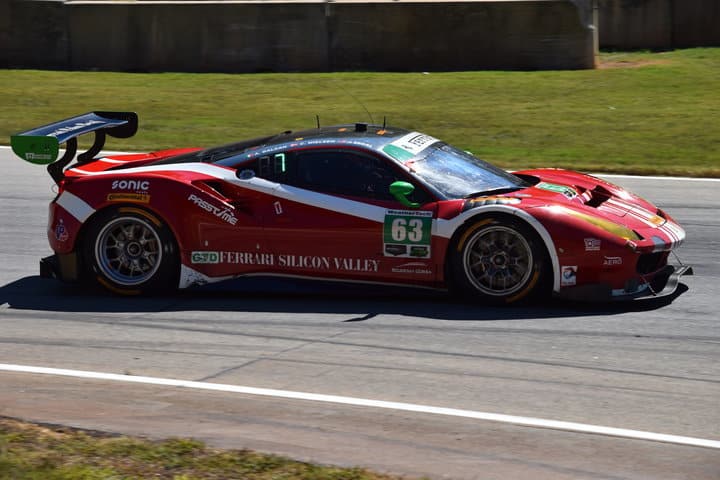 On Wednesday, Scuderia Corsa filled out their driver lineup for this year’s Rolex 24 at Daytona.  2016 IMSA WeatherTech SportsCar Championship GT Daytona champions Alessandro Balzan and Christina Nielsen will be back for the full season.  Matteo Cressoni announced his participation in the Tequila Patron North American Endurance Cup races via a now-deleted Instagram post back in November.  The fourth driver on the team will be Sam Bird, a soon to be 30-year old racer from England.

Bird is a very successful racer overseas, having won the 2015 FIA Endurance Trophy for LMP2 Drivers along with teammates Julien Canal and Roman Rusinov at G-Drive Racing.  That championship came on the strength of four class victories and seven podium finishes in eight races.  Last season, Bird finished second in the FIA World Endurance Championship’s World Endurance Cup for GT Drivers, which is the championship for the GTE-Pro class.  Driving the No. 71 Ferrari 488 GTE for AF Corse, Bird had two wins (Silverstone and Spa) and five podium finishes in nine races.

Bird has four career starts in the IMSA WeatherTech SportsCar Championship and one career start in the Rolex 24 at Daytona.  That was back in 2014 in the PC class for Starworks Motorsport.  Sharing the No. 8 entry with Mirco Schultis, Renger van der Zande and Eric Lux, Bird ended up finishing fifth in class.  Bird’s best career finish in IMSA is a third in class (21st overall) at Sebring.

With a number of new teams coming in, GT Daytona will be quite a bit more difficult in 2017.  Despite that, Scuderia Corsa owner Giacomo Mattioli isn’t the least bit worried.  In fact, he’s signaling the competition to bring it on.

“With this driver lineup and the proven success of the 488 GT3, I am confident that Scuderia Corsa will defend our Championships this year,” Mattioli stated in the team’s press release.  “The GTD field has expanded this season to factory entries and we welcome the challenge.  2017 marks the 70th anniversary for Ferrari and there is no better way to celebrate than success at the race track, where it all began.”

Scuderia Corsa previously announced that they will not race their Ferrari 488 GTE in the GT Le Mans class this season.  However, that car wil see action later this year as the team has two guaranteed invitations to the 24 Hours of Le Mans (one from winning the GT Daytona championship last year and the other from the team winning the GTE-Am class at Le Mans).