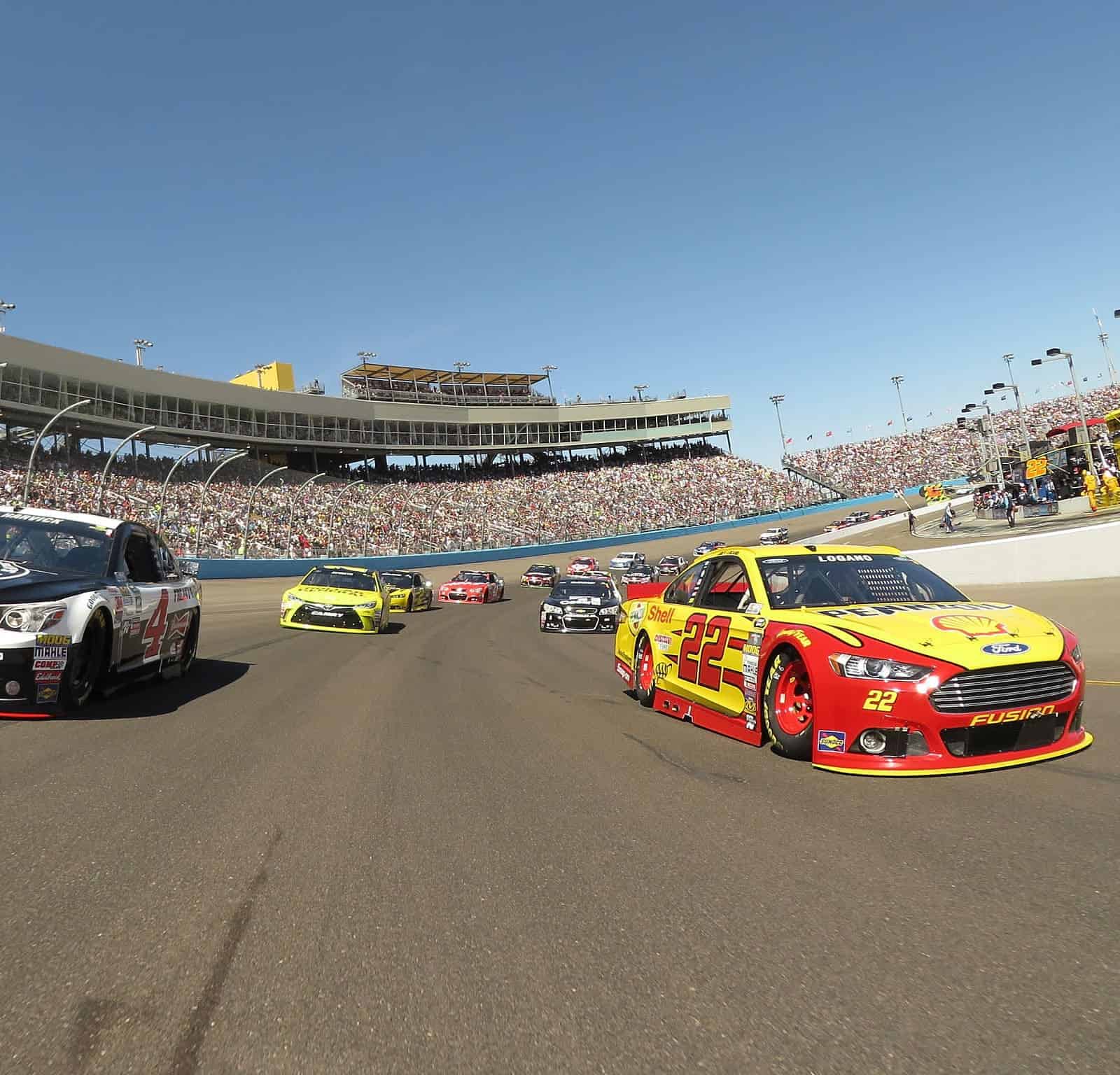 The top question heading into Phoenix International Raceway this weekend might as well be my first question in this week’s four-wide questionnaire called 4 Burning Questions.

Who will complete the Final 4 to fight for the Sprint Cup Series championship next week at Homestead-Miami Speedway?

The top two spots are already a lock, with Round-of-8 winners Jimmie Johnson and Carl Edwards slotting into the first half of the Final 4. However, we have the pleasure of watching six drivers race for those final two spots at Phoenix in the closest point battle in the three-year history of the Chase Grid.

In the green entering Sunday’s Can-Am 500 are Joey Logano and Kyle Busch, However, Phoenix may not be their best place to show their earnings. Busch, with only Phoenix win dating back to 2005, does have back-to-back fourth-place finishes at the 1-mile track and a solid 585 total laps led.

Logano had a run of five straight Phoenix top 10s before an 18th in the spring. Driver No. 22 will have his work cut out if he hopes to be the lone Ford on the championship stage.

Quickly behind is Matt Kenseth, who is one point behind in the fifth spot. Rounding out the -every-position-matters drivers is Denny Hamlin, who sits two points behind fourth-place Logano.

Though the points can go either way, Busch and Logano can rest easy — OK, maybe not — if they look at the Phoenix numbers of Kenseth and Hamlin. Kenseth, who hasn’t won here since 2002, has only one top-5 finish since 2007 and hasn’t even seen the race lead since 2012.

One memory Kenseth will likely not be thinking about this weekend is the 2013 fall race when he lost a significant chunk of points while battling Jimmie Johnson for that year’s crown.

The same can be said for Denny Hamlin, the No. 11 Joe Gibbs Racing driver who has a similar heartbreak in 2010.

Since then, years have past, races have been won and lessons have been learned. With solid 2016 seasons behind them, they only have two drivers to watch out for when it comes to the point battle.

Oh, wait… there’s that Kevin Harvick dude, too. Let’s see if he has struggled here in the past or maybe also has a heartbreak or two at Phoenix [looks over recent track history] …nope, he’s the Cactus King.

With a record-leading eight wins in the desert, Harvick is indeed the man to watch on Sunday, as he’ll likely have to win due to an 18-point deficit. If you aren’t watching him, you’re likely watching the wrong driver.

You can also throw in Harvick’s Stewart-Haas Racing teammate Kurt Busch, who, at 34 points in the red, should have to win Sunday to advance. Giving a driver like him an opportunity at another championship is a recipe for some fun eye candy from the No. 41 shop.

Who Makes the XFINITY Series Final 4?

And now, let’s switch focus to the XFINITY Series.

For the first time in the history of the second-tier series, it will have a four-man race for the championship at Homestead.

With only three full-time regulars grabbing a win this season, points have proved to be a must, giving us the only 2016 Chase without a locked-in driver. This has brought us a fun, tight battle to watch in Saturday’s Ticket Galaxy 200 at Phoenix.

You name it, they’ve got it: Must-win situations, one-point margins and an underdog story to keep an eye on. Entering Phoenix, it’s the top-3 drivers of the year in Daniel Suarez, Elliott Sadler and Erik Jones who sit relatively comfortable with 17, 16 and seven points to spare, respectively.

I say “relatively comfortable” due to incidents like the one seen below when Sadler crashed out of Phoenix and decimated his chance at the title in 2011.

Behind third-place Jones is Blake Koch, driver for first-year team Kaulig Racing, whose success started about as quickly as the team itself. As they sit one point to the good with one race to go, there are only a few top teams that can take the opportunity away.

The first is JR Motorsports and Justin Allgaier, who sits one point back from Koch despite having 12 top 5s to Koch’s none. Again, that speaks to the hunt for consistency as the Sprint Cup regulars have won the last three Chase races.

The No. 16 Roush Fenway Ford of Ryan Reed is five points behind Koch and has had his best season with one top-5 and six top-10 finishes in 2016.

With these guys charging for every spot they can, there is Darrell Wallace, Jr. [-20 points] and Brendan Gaughan [-33] who likely must win to join the Final 4 in Homestead.

It’s pretty much the same story for a different series. And there’s nothing wrong about that.

Looking at past numbers to gauge expectations, it’s easy to put Suarez, Sadler and Jones [the only regular-series winners in ’16] into the Final 4. Behind them, the fight is on.

Unlike the XFINITY Series, which has the top drivers of the year in semi-steady point positions, it’s a different verse for the Trucks entering Friday night’s Lucas Oil 150.

With Johnny Sauter taking both race wins and a Final-4 spot in the opening races Round of 6, it’s a five-man battle to earn the three remaining spots in Phoenix.

It all starts with William Byron, the rockin’ rookie whose six wins lead the series in 2016. Despite having the most laps led this season, the 18-year-old is only five points to the good. In other words, the point leader could miss the championship race. Wow.

Behind the No. 9 is the other Kyle Busch Motorsports kid in Christopher Bell, who is four points above the cutoff zone along with Matt Crafton and his — spoiler alert — one-point margin over fifth place.

No matter what you say about all three series having a Chase, the fact we have three one-point gaps that could decide the championship pictures is quite interesting. It shows a level of competition that the lower two levels can certainly need nowadays.

However, when there’s a driver one point to the good, there’s that other guy just barely missing the fun. That guy is Timothy Peters, who may face the first winless season of his eight-year Truck Series career. A positive for the Red Horse Racing man is that he’s the defending track winner after taking the win at Phoenix one year ago.

Rounding out the championship hopefuls is Ben Kennedy. Say what you want about the great-grandson of “Big” Bill France, Sr., but there is no shortage of fire in the No. 33 GMS Racing driver. He showed that at Martinsville after he got punted by non-Chaser Ben Rhodes. Looking back, that incident certainly cost him big with only one race to go and 13 points in debt to the Final 4.

What is the goal for the Debut Drivers in Phoenix?

With D.J. Kennington leading the charge, there are several drivers making their debuts this weekend at Phoenix.

Most of whom – except Alex Labbe in his XFINITY Series debut attempt – will take the green flag in Friday’s Lucas Oil 150, the Camping World Truck Series’ penultimate race in the Desert of the Sun, while the Championship 4 are decided among the series’ best drivers.

Starting with some top teams, Noah Gragson is slated into the No. 18 Kyle Busch Motorsports Toyota. Gragson, who competed full-time in both the K&N Pro Series East and West, will get a taste of what’s to come in 2017 when he replaces William Byron in the most successful truck the series has seen in the past two years.

And it’s not a coincidence that the 18-year-old debut will in Phoenix. With Byron doing the same in 2015, Erik Jones also grabbed his first Truck win here in 2013 before picking up the series championship two years later.

The pressure of debut drivers may be heavier on the shoulders of Dominique Van Wieringen and Myatt Snider, two drivers in lesser equipment who don’t have full-time Truck deals already inked for 2017.

Wieringen, in the No. 02 Young’s Motorsports Chevrolet, will join Jennifer Jo Cobb as the second female driver in Friday night’s field when the 21-year-old Snider will take the No. 22 for the team’s regular driver Austin Wayne Self.

Though they may like to impress some teams and certainly stay out of the way in the championship picture, Wieringen’s words this week on SiriusXM NASCAR Radio may be the best to live off in a debut weekend: “I just want to finish the race.”