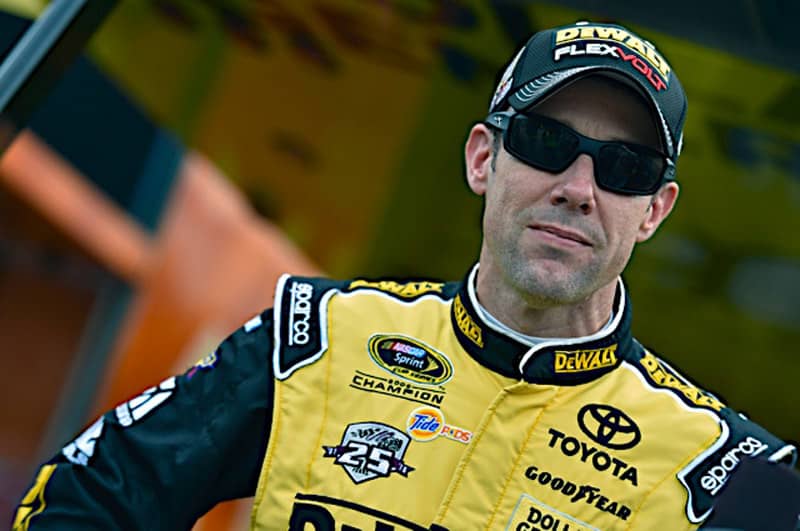 Matt Kenseth has never been an incredible qualifier. It took the Wisconsin driver nearly 15 years in the Sprint Cup Series just to get his 10th pole. But on Friday at Kansas, Kenseth squeaked past teammate Kyle Busch by just .001 of a second and won the 18th pole in his career.

It is his third pole at Kansas, a track he has won at twice. The 44 year old has proven he can still run up front this season in the Chase, having three top fives in the last three races and almost winning Loudon.

Starting next to him on Sunday will be Busch. After years of trials and frustration at Kansas, Busch finally broke through earlier this season and won at the 1.5 mile oval. Thanks to that win, Busch needs Sprint Cup Series wins at just Charlotte and Pocono to hold wins at all 23 tracks on the Sprint Cup circuit.

Carl Edwards will start third. Edwards is on the hunt for his third win at Kansas this weekend. Some revenge is in the plans for Martin Truex Jr. on Sunday after he rolls off fourth; Truex led 173 of 267 laps in 2012 but came up short in the end. In 2015, Truex led 95 laps but faded to ninth at the finish. Finally, earlier this season, Truex led 172 laps but mechanical problems shut him out of late race contention, and he finished 14th.

Alex Bowman will start fifth. Bowman has said he does not have a ride for next season in spite of his impressive performances this year while substituting for the injured Dale Earnhardt Jr. In his four starts at Kansas in lesser equipment, Bowman did not have a finish in the top 30.

Joey Logano, who has won the last two fall Sprint Cup Series races at Kansas, will start sixth. Denny Hamlin and Brad Keselowski will start seventh and eighth respectively. Kevin Harvick, who sits eight points out of the next round of the Chase, will start 11th on Sunday. Austin Dillon, who replaced Harvick at Richard Childress Racing in 2014, will start next to him in 12th. Chase Elliott will start behind them in 13th and Kurt Busch will start 15th. Jimmie Johnson (21st) will be the lone Chase driver not starting in the top 20, but his win last week at Charlotte allows him to breathe easy these next two weeks until the next round.

The full starting lineup can be found here.