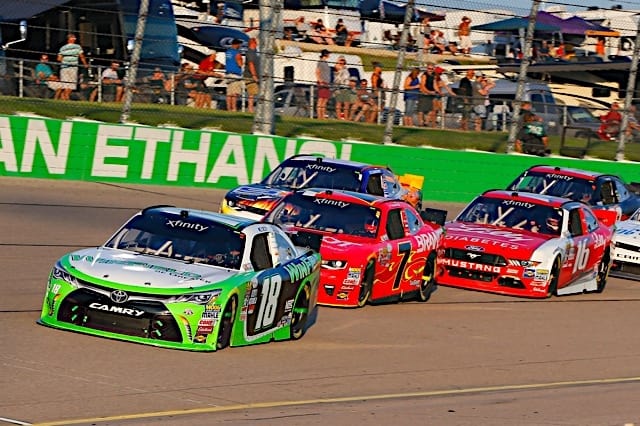 Daniel Suarez continued a strong season and a good start to the Chase by winning the Drive Sober 200 at Dover International Speedway.  The race was originally scheduled to run on Saturday afternoon, but persistent rain pushed the event back to Sunday morning.  With the Sprint Cup race set to run later, Suarez was Sunday’s first winner, claiming his second victory of the season and a guaranteed spot in the Round of 8.

“The guys just brought an amazing car,” Suarez said in victory lane.  “We had a ton of speed.  (This was) one of those races that you will feel bad if you lose it.”

Suarez was indeed solid all day, leading 123 of 200 laps.  However, he briefly lost the lead to Justin Allgaier following the race’s final restart on lap 152.  Suarez made a daring pass to get the top spot back three laps later, racing up to Allgaier’s back bumper in turn four.  Allgaier got loose exiting the corner, allowing Suarez to complete the decisive pass.

“He got me right there on the restart, and I was a little faster than him,” Suarez said.  “I knew that if I was close to his rear bumper I was going to make him loose.  I don’t think I never touched him, but that was enough to make him loose and be able to complete the pass.”

While Suarez raced to victory, the Chase only got more difficult for his Joe Gibbs Racing teammate Erik Jones.  Jones entered the Dover race three points below the Chase cut line.  He appeared to be on his way to a good finish, leading much of the race’s early going.  However, Jones began to slide back through the field during the second quarter of the race.  To make matters worse for the No. 20 team, Jones made an unscheduled green flag pit stop on lap 100 to address a vibration.  The crew changed all four tires and sent Jones on his way, but the driver reported that the vibration had only lessened a little bit.

Jones was two laps down after the pit stop.  He did cycle back to the lead lap and ran in the top 10 once more, but the car did not have the handling it had earlier in the race.  Worse yet, the lap 100 pit stop put Jones off sequence with the rest of the field.  He had to make an additional pit stop for fuel on lap 193, resulting in a 16th place finish for the No. 20 team.  Jones dropped to 10th in points and is now four markers below the Chase cutoff.

Ty Dillon was another driver who came to Dover below the Chase cut line.  An eventful race left him with a second place finish and a much smaller points deficit.

Things started out badly for the No. 3 team when Dillon was sent to the rear of the field for unapproved adjustments.  The team apparently put silicone on the car’s shark fin after inspection, prompting NASCAR to send Dillon to the back.  He worked his way forward during the opening laps, but trouble struck again when Dillon hit the wall on lap 35, scraping up the No 3 car’s right side.  It turned out that the incident did not cause any significant damage to Dillon’s Chevy.

After that, everything went much more smoothly for Dillon.  He made an impressive charge through the field during the race’s final run, taking second from Allgaier in the closing laps.  Dillon is still three points behind the last transfer spot, but the No. 3 team has a much better chance to advance to the Round of 8 than it did before.

The Chase demands a mistake-free performance, and Ryan Sieg could have made a very costly one.  Making his last pit stop on lap 123, Sieg was flagged for being too fast exiting pit road and had to make a pass-through penalty under green.  The No. 39 team finished two laps down in 19th, the worst of all Chasers.  Sieg is now 10 points below the Chase cut line and in danger of getting eliminated.

Suarez’s only mistake of the race was getting into the back of Justin Marks on lap 138.  Marks slid sideways in turn one trying to save his car, but then the No. 42 cut to the right and darted toward the outside wall. Marks hit the SAFER Barrier nose-first, and his car momentarily lifted off the ground following the violent impact.  Marks was okay after the incident, but the No. 42 team left Dover in 31st after another rough race.

Underdog Performance(s) of the Race

Marks’ crash shook up the running order, bringing out a caution while some drivers were trying to stretch their fuel.  Cory LaJoie, piloting the No. 24 JGL Racing Toyota, was one of those drivers.  LaJoie was able to pit under caution after many of the front runners were caught a lap down.  Since he stayed on the lead lap, LaJoie lined up fourth for the last restart and finished sixth.  LaJoie earned his best NXS finish ever and his second top 10 of the season in seven starts.

Saturday’s washout created an odd situation for Sunday.  Kyle Busch, Joey Logano, and Austin Dillon were all scheduled to compete in the XFINITY Series race.  However, each of their team owners opted to have their Sprint Cup regulars focus on the Cup race, an elimination event for the Chase in that series.  So JGR got Drew Herring to fill in for Busch, while Team Penske went with non-Chaser Ryan Blaney.  Richard Childress Racing got another non-Chaser, Regan Smith, to replace Austin Dillon.

Blaney easily faired the best of the three replacement drivers.  He drove a quiet but solid race, capped off with a fourth place finish.  Smith could only muster a 13th place result.  Herring, who will not compete in the Sprint Cup race, ran in the top 10 much of the day but made a mistake under caution.  While preparing for a restart, Herring made contact with Darrell Wallace Jr.  The contact cut Herring’s tire, forcing him to make a pit stop after the race went green.  He would finish 21st.

The race for the other Sprint Cup drivers ended before it really began.  Josh Wise brought out the first caution of the day on lap two when smoke erupted from his No. 15 Ford.  Matt DiBenedetto tried to avoid hitting Wise, but wound up getting into the wall instead.  Neither driver returned to the race.

“I want to apologize as well to the 42.  That wasn’t my intention to wreck him that way.  I thought ‘He’s in line okay,’ and then he went to the bottom.  I apologize for that.” –Daniel Suarez

“I think the 19 just got a big run there.  I don’t know.  I got hit from behind and that’s always a bummer.  I saw that he had poked the nose (of his car) out and that he was coming with a lot of speed, but I was trying to pass the 93 there, and he did what he did, and we got a tore up race car.  It sucks.” –Justin Marks

“Just kind of an embarrassing day overall.  We want to run a lot better than that.  It’s pretty embarrassing to not even be in the Chase right now for the next round, too.” –Erik Jones

“The car was really good.  Obviously we were motivated.  Little disappointed with the way everything started there, but a good run for our Red Kap/Sullivan Uniform Chevy.” –Ty Dillon

It is no secret that the JGR cars have had speed this season.  Suarez, however, had not gone out and dominated a race in 2016 until Sunday.  He finally checked off that box, and he picked a great time to do it.  Perhaps it is fitting that the two drivers who led the points for most of the season are the two who know that they will be a part of the Round of 8 first.

Meanwhile, Jones and Dillon are still on the outside looking in.  Neither has far to go to reach a transfer spot.  Blake Koch’s pit strategy backfire leaves him only four points above the cutoff.  Brennan Poole had a lackluster performance at Dover and holds the last transfer spot, three points ahead of Dillon.  The only drivers in real trouble are Sieg and Brandon Jones, who is 17 points behind Poole and last on the Chase grid.

However, Jones and Dillon have no margin for error.  Neither needs a win, but both need a good finish to advance.  In a points battle that could be very close, the NXS Chasers will probably have some sleepless nights ahead.

Charlotte Motor Speedway will host the final race of the Round of 12, the Drive for the Cure 300, on Friday, October 7th.  Race coverage begins at 8PM Eastern on NBCSN.