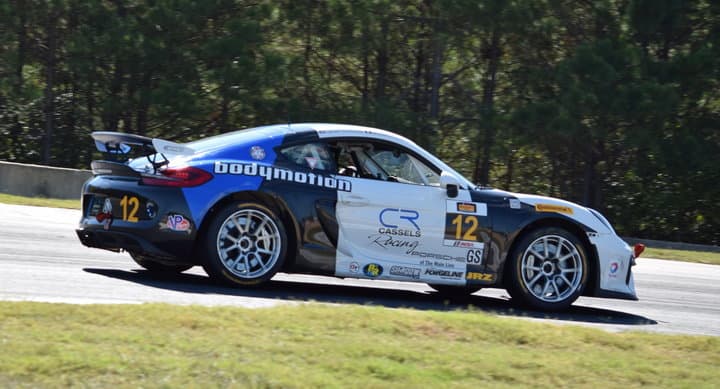 On Wednesday afternoon, the 36 teams entered in Friday’s IMSA Continental Tire SportsCar Challenge Road Atlanta 150 took to the 2.54-mile road course known as Road Atlanta for their opening practice session.  Temperatures were in the mid-80’s and the humidity was a bit up there.  As a result, teams had to deal with a somewhat slippery surface.

In Grand Sport, the quickest laps were all turned in at the beginning of the session.  Multimatic Motorsports‘ Billy Johnson set the early time to beat before Team TGM‘s Guy Cosmo moved to the top.  Only five minutes into the session, Bodymotion Racing‘s Trent Hindman put down a lap of 91.396 seconds (100.048 mph) to put himself at the top of the timesheets.  Hindman’s time could not be beaten by the remaining Grand Sport teams, resulting in Hindman’s Porsche Cayman GT4 topping the charts.

Hindman’s lap, which was the only lap of the session turned in at more than 100 mph for an average, was more than six-tenths of a second faster than Muehlner Motorsports America‘s Jeroen Bleekemolen in second.  Cosmo’s best time held up for third.  CJ Wilson Racing‘s Marc Miller was fourth fastest, giving Porsche the top 4 positions in the session with their Cayman GT4’s.  Johnson ended up fifth quickest.

In Street Tuner, the same manufacturer was on top, but the margins were quite a bit closer.

Murillo Racing‘s Eric Foss turned in the quickest ST lap of the session with a time of 96.326 seconds (94.928 mph) in his No. 56 Porsche Cayman.  That lap was good enough for tenth overall, beating out the No. 6 Porsche 911 from Rebel Rock Racing.  Just under a quarter of a second off of Foss’ time was Connor Bloum in the No. 19 Porsche from Rennsport One in second.  Rebel Rock Racing’s Robin Liddell was third in the No. 8 Cayman, followed by Spencer Pumpelly in the No. 17 from Rennsport One.  Once again, a 1-2-3-4 for Porsche, this time with the regular Cayman.  Mat Pombo was fifth quickest in the No. 73 MINI JCW for MINI JCW Team, breaking up the Porsche domination.  Ultimately, Porsche Caymans held six of the top seven positions in ST.

There was only one red flag during the 45 minute session.  That occurred because of an off-course excursion in turn 1 for the BimmerWorld Racing No. 84 driven by team owner James Clay.  Clay went off-course and got stuck in the gravel.  No damage was done to the car, but the safety crew had to come out to pull the four-door sedan out of the trap.

The Continental Tire SportsCar Challenge returns to the track on Thursday with one more 45 minute practice session at 10:10 a.m..  Qualifying is scheduled for 4:45 p.m.