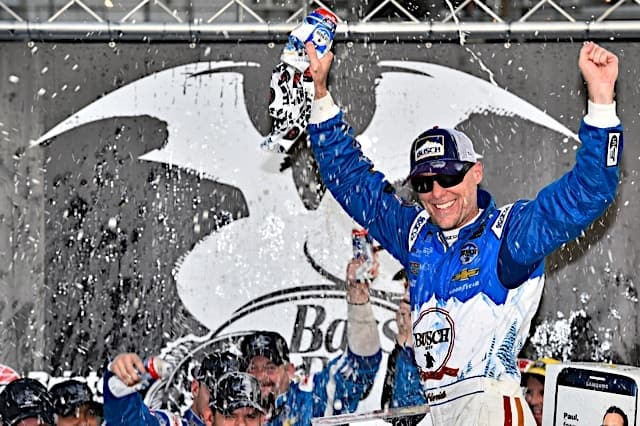 At the end of a wild, rainy weekend at Bristol Motor Speedway it wasn’t rain, but Busch Light that poured showers over victory lane.

Kevin Harvick survived an attrition-filled short-track scuffle and drove off from Ricky Stenhouse, Jr., to win the Bass Pro Shops NRA Night Race. The result is Harvick’s 33rd-career victory, and his second win both at Bristol.

The odds didn’t favor the Harvick entering the weekend –the Californian rolled off in 24th at a track that traditionally favors track position, and had gone winless for the past five months dating back to the Mar. 13 race at Phoenix International Raceway– but the 2014 Sprint Cup Series champion drove a consistent race and benefitted from multiple competitors crashing out to end his summer struggles.

Stenhouse followed in second to cap off an emotional weekend as he honored Bryan Clauson, a former NASCAR and IndyCar driver lost on Aug. 7 at 27 years old following a crash in the Belleville Midget Nationals.

While Chevrolet and Ford dueled for the checkered flag at the end of the 500 laps, it was Toyota that led the way early on.

When the race finally restarted on Sunday afternoon, Busch again led the way, pacing the field for a race-high 256 laps. However, a broken part and crash ultimately relegated Busch to a 39th-place result, taking Martin Truex, Jr., out of contention in the process.

With the younger Busch brother out, elder brother Kurt Busch rose to the lead on a restart, and while he would’ve been black-flagged for jumping the start, it was instead a large crash that ended the win hopes of Busch along with Brad Keselowski, Matt Kenseth, Chase Elliott and Ryan Blaney.

With his closest competitors out, Harvick took over, leading the field for 128 laps and pulling away on the final green-flag run to give Stewart-Haas Racing its first victory in the Bristol Night Race. Afterward, Harvick traded twin burnouts with Tony Stewart to commemorate Stewart’s final race at the Last Great Colosseum.

The caution flag flew nine times on the race – once for a competition caution, twice for both rain and debris, and four times for incidents. There were 20 lead changes between eight drivers throughout the event. Leaders included Busch, Harvick, Logano, Edwards, Denny Hamlin, Elliott, Ryan Newman and Brian Scott.

With the victory, Harvick moves to the points lead, 27 ahead of Keselowski.

The Sprint Cup Series will return on Aug. 28, when the field heads to Michigan International Speedway for the Pure Michigan 400.