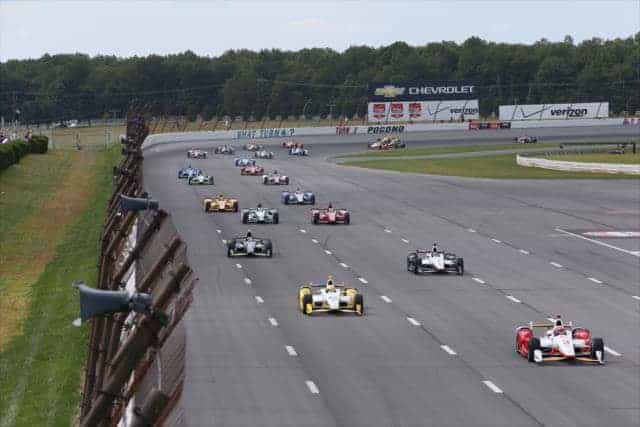 After a few weeks off, the Verizon IndyCar Series will return this Sunday for what’s sure to be a bittersweet weekend and a crucial race for the 2016 championship battle.

Emotions will be high throughout the weekend as the paddock mourns two former competitors.

While a year removed, Wilson’s loss still sits fresh among the IndyCar paddock, and will be felt by the drivers competing in the 500-mile event, along with hometown driver Sage Karam, who was unable to secure the funding necessary to return to Pocono after his involvement in Wilson’s crash last season.

Unfortunately I will not be racing pocono this weekend. We tried very hard to make a deal happen. I'll still be there to watch a great race!

Sunday’s race will also mark the first for the IndyCar field since the loss of three-time Indianapolis 500 competitor Bryan Clauson at USAC’s Belleville Nationals.

Without Clauson, Byrd Racing’s affiliation to IndyCar rookie Conor Daly and Dale Coyne Racing serve as their only remaining ties to any race team.

Daly and teammate Pippa Mann will each honor Clauson during the weekend, with Daly in sporting a special No. 88 “BC Forever” livery.

Honored to carry the initials of a legend on the side of our car this weekend. Let's ride #BCforever @ByrdRacing pic.twitter.com/KFgbLFNmoJ

While much of the weekend will be focused on the memory of IndyCar’s fallen stars, the race itself will serve as a critical weekend for both the championship hopefuls and a struggling manufacturer.

Points leader Simon Pagenaud enters the weekend with a sizable 58-point lead over Team Penske teammate Will Power. With four rounds remaining and third-place Helio Castroneves sitting 111 points back, Pagenaud and Power both enter Pocono heavily favored to compete for the championship.

Pagenaud has proven near invincible through the opening 75% of the season, winning four of the first 12 races. If Power hopes to gain enough ground to have more than an outside chance in the double-points finale at Sonoma Raceway, the Australian needs to gain ground on the ovals at Pocono and Texas Motor Speedway, where Pagenaud has shown weakness.

On the other end of the spectrum, the whole of Honda’s organizations enter Pocono looking for anything to be optimistic about.

The company claimed arguably the biggest win of the last decade in IndyCar when rookie Alexander Rossi coasted across the yard of bricks to win the 100th Running of the Indianapolis 500 in May, but in the months since the manufacturer has failed to yield another winner.

Honda now heads to the final race on a superspeedway for 2016, with Andretti’s Ryan Hunter-Reay returning as the defending race winner.

For a manufacturer with only one victory and two drivers inside of the top 10 in points after 12 races, anything that can provide reason for optimism is a bonus.

Chevrolet, and Team Penske in particular, are likely the favorites entering the weekend, but if Honda can find the speed and consistency they showed throughout the Month of May, the manufacturer could potentially return to victory lane for the first time in three months.

22 drivers will fill the field for Sunday’s 200-lap, 500-mile race. The race comes following the announcement of an agreement between IndyCar and Pocono to hold races at the Pennsylvania oval through 2018.

Coverage for Sunday’s race will begin at 3 p.m. ET on NBCSN.