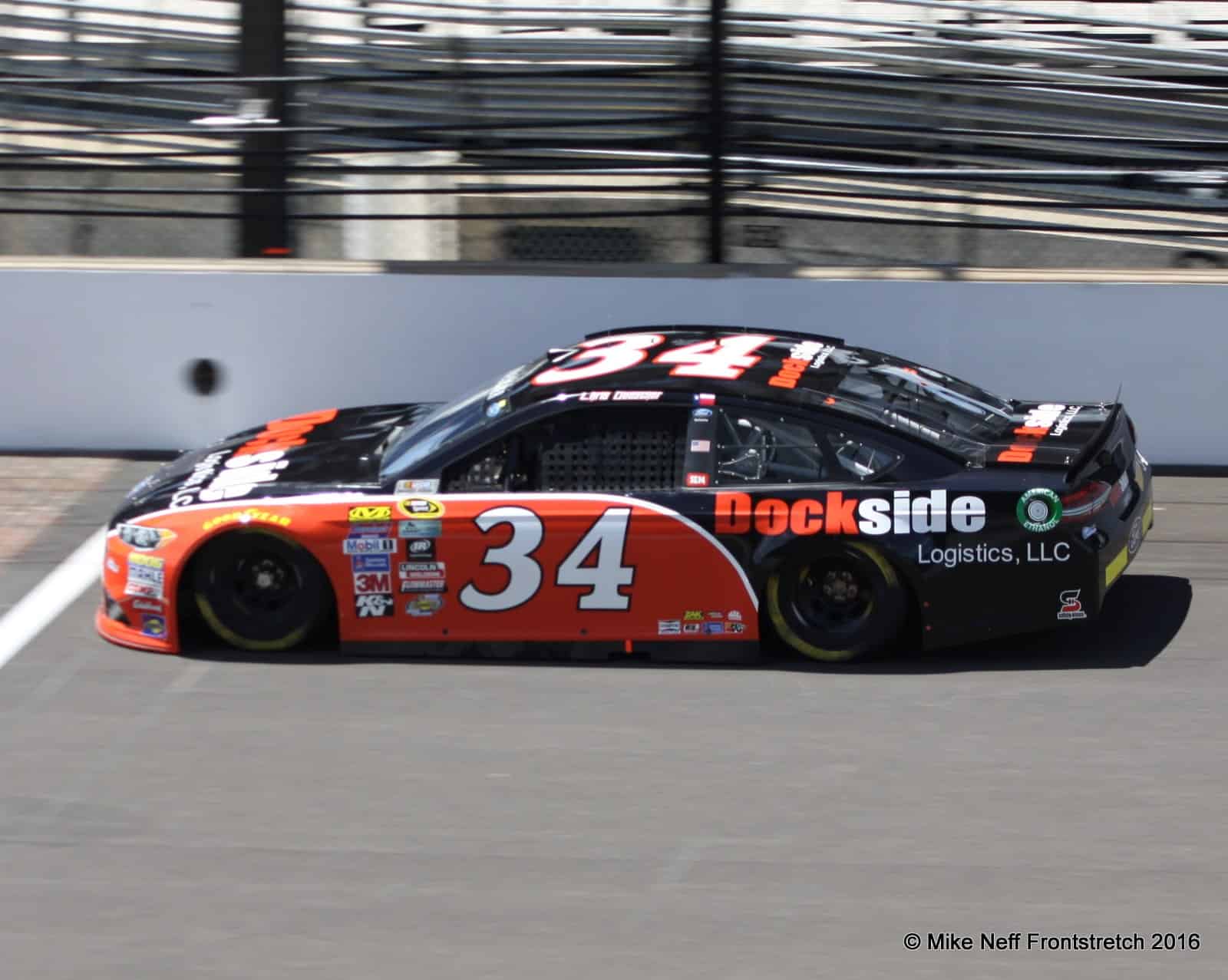 On the heels of a career-best 14th-place finish at Indianapolis Motor Speedway, Chris Buescher sees light at the end of the tunnel. A season filled with many low spots, the No. 34 team is starting to its stride.

Taking over the ride that David Ragan, his good friend, had once won with at Talladega Superspeedway in 2013, the Texas native has experienced an average rookie season. It would be unfair to compare him to the likes of Chase Elliott and Ryan Blaney, both whom are in top-tier equipment, with Elliott racing for Hendrick Motorsports and Blaney working with the Wood Brothers, which has an alliance with Team Penske.

Through 20 races, Buescher has three top-20 finishes, but that doesn’t necessarily define his season.

“As a race team, I think we’ve been pretty good right now,” Buescher told Frontstretch. “We’re definitely heading in the right direction over the past couple of weeks. We had a little bit of a slow start, just getting caught up in a couple accidents through the year that’s really hurt us. We don’t look at points, but we’ve been involved in a lot of things that wasn’t of our doing.”

Currently, the No. 34 team sits 31st in the championship standings, picking up two positions at Indianapolis last weekend. Going forward, Buescher knows that the results need to improve on, but that Front Row Motorsports is not that far off.

Led by veteran NASCAR crew chief Bob Osborne, Buescher expects to run well. The knowledge his crew chief has could potentially lead him to the next step.

“It’s nice having somebody that has a lot of experience and that has won a bunch of races and been so close to wrapping up championships,” Buescher said. “There’s a lot of knowledge there that I wouldn’t have from any other series. Any amount of track time isn’t going to prepare you for what goes on during a 600-mile race at the Cup level.”

Recently, the performance from FRM as an organization has improved from the past. Last week, both cars finished in the top 20, with Landon Cassill finishing 20th.

Teaming up with Osborne and being associated with Cassill, Buescher is confident of the position that he’s in. He has several people within the organization that he can go to for help, as a typical rookie would.

“Landon has been a really cool teammate because he brings a different perspective than every other driver,” Buescher elaborated. “He definitely gives a lot more information than I do and than most guys do. He has a way to pick apart what he is feeling and to try and better that. He’s been around long enough and been in a number of different cars that he knows the feel that he’s looking for and feel it on that.”

The two teams are said to work closer than any pair of teammates that Front Row Motorsports has had in its 12-year history. As the season progresses, that’s only going to improve.

“We’re in and around each other every weekend at the track and off the track,”Buescher said. “We do all of our debrief meetings after races and practices. Everything is electronically linked. We talk back and forth. The crew chiefs talk back and forth. It’s very integrated and there’s not much that one team does that the other doesn’t know about.”

Unless the team throws a Hail Mary, it’s unlikely that Buescher will be a part of the Chase this season. Currently, the only rookie who would be championship eligible would be Elliott, sitting 63 points above the cutoff mark.

Before the season started, it was announced that Buescher’s No. 34 team would have an alliance with Roush Fenway Racing, an organization that has improved since 2015. Currently, RFR has two drivers on the outside looking in of the Chase cutoff, with Trevor Bayne 14 points off the pace and Ricky Stenhouse, Jr. 23 points back.

The data and feedback that Buescher receives from RFR is more so on the technological and wisdom side. Gaining resources is something that Front Row Motorsports needs to do in order to move up on the pecking order of organizations in the Sprint Cup garage. An alliance with RFR is a step in the right direction, according to Buescher.

“We’ve just tried getting more knowledge this year from the technological side in our program, where we can try to improve on,” Buescher said. “Front Row Motorsports being a smaller team is trying to build those resources up and this is a good way to do it. It’s a pretty efficient way for the season. Obviously, I have pretty strong tides with Roush Fenway Racing, kind of coming from there, it’s been a good fit to know a lot of the guys over there.”

Buescher admits that the one big difference between FRM and RFR is the distance from the shops, sitting 50 minutes away from each other. The confidence of the 24-year-old hasn’t been shaken with the fallback this season.

Jack Roush, owner of Roush Fenway Racing, has been instrumental in the career of Buescher. He has been there every step of the way, protecting a potential future driver, helping him as he moves up the ranks.

“Jack [Roush] has been huge,” Buescher said. “He’s believed in me from the start of this deal six or seven years ago and has been committed for me to develop going through different series. The goal was always to make it to the Cup level and be competitive. We’re there. Not as good as we want to be, but making strides there and just learning. There’s been a lot of learning involved and Jack has been a big supporter in all of that.”

As of Pocono, Buescher does not know his future beyond 2016. There is a strong possibility that he will be back with Front Row Motorsports, before joining Roush Fenway Racing in 2018.