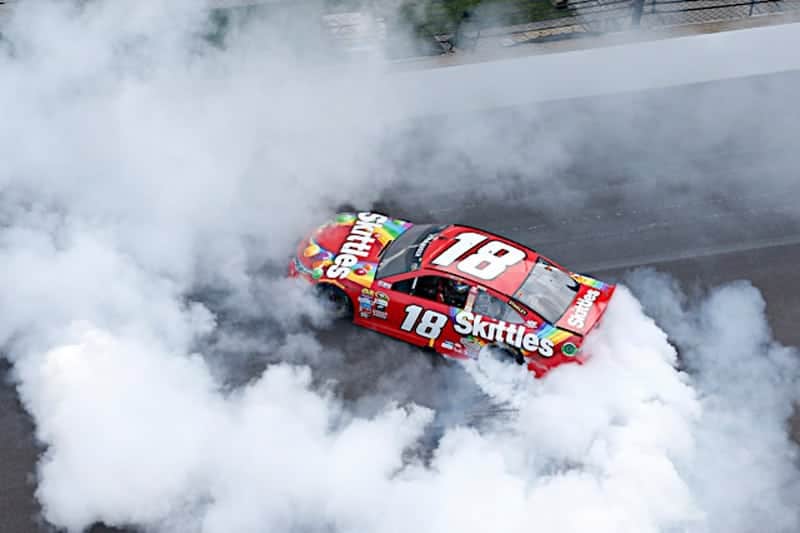 We know it was hot Sunday at Indianapolis Motor Speedway, with in-car temperatures regularly between 110 and 115, and track temperatures in the 130-degree range. But the temperature wasn’t the only indicator of who was hot, or not, at the famed 2.5-mile oval.

No matter what the temperature was, no driver was as hot on the track as Kyle Busch was this weekend. Busch became the first driver to win both the pole positions and the races in each the Sprint Cup and XFINITY races on the same weekend. Of the 243 laps that Busch ran on Saturday and Sunday, he led 231 of them. That’s an unheard type of number. Sure, we are used to seeing Busch make the XFINITY races a snoozefest, but the fact he carried that into Sunday was actually pretty remarkable. Also, the good news for Busch is that winning the Sprint Cup race at Indy often is a sign of better things to come. Last year, became the ninth Indy Sprint Cup winner to go on and win the title, and at this point, it would be no surprise if he is a repeat champion as well.

Sure it was hot at Indy, but to use that as an excuse as to why there were so few fans in attendance is weak. Sure, NASCAR can blame it on the southern weather invading the Midwest, but there are plenty of places that have been, or will be, just as hot with plenty more fans in attendance. The low attendance may be a combination of things, but it is likely that fans want to spend their money on the Indy 500, which was sold out in May, rather than the NASCAR race. That’s because the last few Indy 500s have been off the charts outstanding to watch, while the NASCAR races there have gone in the other direction. The stock cars are a bit too bulky and wide to allow for easy passing at Indy, and unfortunately, it just hasn’t made for a good show, especially in recent years.

Back after finishing 35th at Kansas, Kyle Larson looked like he was in a win or go home situation when it came to making the Chase. He was in 21st place in the standings and 52 points out of 16th place then. But it’s all different now. After Sunday’s race at Indianapolis, Larson finds himself 15th in the points standings, with an 11-point lead over 17th place Dale Earnhardt, Jr., who will not be racing again this weekend, and 14-point lead over 18th place Trevor Bayne.

Even if Junior had not missed the last two races due to concussion issues, Larson would still be in 16th. But how did he do that without a win? Well, in the last nine races, he has finished 13th or better seven times and in the top 20 in each of them, avoiding points-killing 30-something finishes. Now that Larson and his team aren’t in a must-win situation each week, that first Sprint Cup victory might be coming real soon.

A driver who is now firmly in that win-or-go-home mode is AJ Allmendinger. He certainly will be one of the favorites at the second and final road course race of the season at Watkins Glen, so there will be a lot of pressure on him and his team to earn the victory and make the Chase. Allmendinger did have one of those points killer finishes Sunday, coming in 38th after the engine expired due to overheating. He is now 21st in points, 41 behind 16th-place Kasey Kahne with six races to go in the regular season.

One of the coolest things to see after the race Sunday was the final lap that Tony Stewart and Jeff Gordon took together around Indianapolis Motor Speedway. Stewart finished 11th and Gordon, filling in for Earnhardt Jr., finished 13th. But to see the two Hoosier legends do one final circuit around their home track (I know Gordon was born in California, but he was raised in Indiana from the age of 14) was quite a moment. And now, just imagine what the attendance might be like in the next few years without two of Indiana’s biggest racing legends competing at the Brickyard.

The NBC coverage has been tolerable for much of the season, but when announcer Rick Allen didn’t give us fair warning of the graphic nature of the blister on Kevin Harvick’s heel, that pretty much put me over the edge. My day would’ve been quite fine without seeing that blister picture. Please, think of your fans at least a little NBC.

This week the Sprint Cup series heads to Pocono, and often the same driver that has success at Indy, also has success as Pocono. So, with that in mind, I’m going with the favorite here in Kyle Busch. The deep sleeper underdog who you might not think about pick this week is Clint Bowyer. He’s had a rough season for sure, but at Pocono Bowyer has finished in the top 20 in four of the last five races, including having two top 10s. This weekend is probably as good of a place as any to pick him if you need a cheap option.