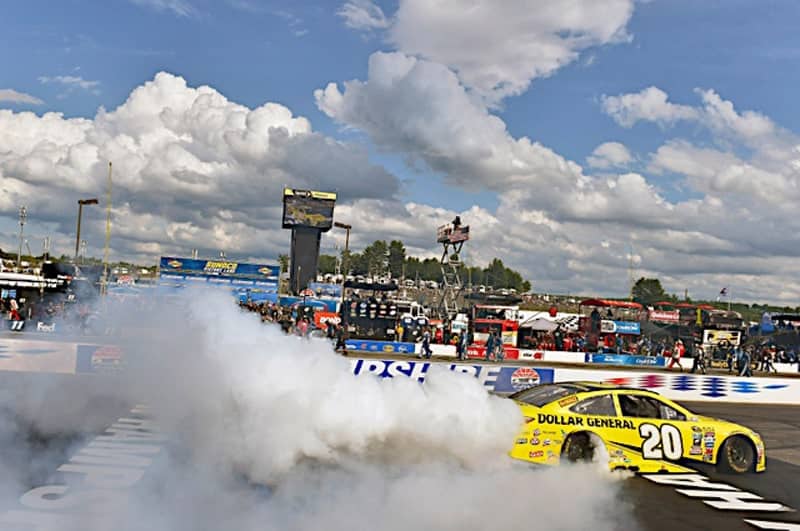 One driver who knew that value of that prime real estate, otherwise known as the high side on restarts Sunday was Matt Kenseth. The veteran driver used that to his advantage to earn his second win of the season and third of his career at Loudon. Kenseth has been good in plenty of races this season, only to have nothing to show for it. But that wasn’t the case on Sunday. The bad news for him is that the car failed post-race inspection. The penalty wasn’t announced yet, but I’d be shocked if the win doesn’t count in the Chase standings. The biggest question is how many points will Kenseth lose.

One driver who knows all about having a fast car in several races this season but not being able to win is Martin Truex, Jr. He does have one victory on the season, but he could have easily had three or four more if not for a variety of freakish issues that have left him wanting more. This time Truex led 123 laps, only to come up with a 16th-place finish. He dominated the middle part of the race and appeared to the favorite once again, only to be foiled by a broken shifter this time. But for at least this week, Kyle Busch knows how Truex feels. Busch led 133 laps, only to finish eighth. The end game can sometimes be a bit tricky and frustrating for some.

Though it was certainly a disappointment for those in Junior Nation to hear that Dale Earnhardt, Jr. was going to miss Sunday’s race due to a concussion, if he wasn’t feeling right, sitting out was the right move. Junior said on his radio show Monday that he had passed the baseline testing given for concussions, but that his real issue was balance. The other and most important issue here is that Junior is taking care of himself. There are too many stories of NFL players who played after suffering a head injury, then later struggled with all kinds of issues later in life, some of those leading to suicide. So, sure, it might not have been the most popular move Junior ever made, but it was the right one.

I’m not going to debate which TV crew (FOX or NBC) is better. They both have their strengths and weaknesses. But there is no debating that it’s not the same without Larry McReynolds on a broadcast.

And just like that, Tony Stewart is looking like a real contender for a fourth title in his final Sprint Cup season. Stewart finished second Sunday, his second straight top 5, and his third in the last four races. After missing the first eight races this season due to an offseason injury, Stewart had to get a win (which he did at Sonoma) and be in the top 30 in points to make the Chase. He now sits 28th and has a comfortable 67-point cushion over 31st-place Brian Scott. Also, give Stewart crew chief Michael Bugarewicz credit for having him pit just before a debris caution at Sonoma, then also helping decide to go into fuel saving mode at the right time at Kentucky.

One of the bigger developments in recent weeks has been the lack of good finishes by the Hendrick Motorsports cars. This week was not much better for what has been considered the elite team in Sprint Cup for several years. The top finish was a 12th place from Jimmie Johnson, after Chase Eliott and Alex Bowman each suffered tire issues with 30 laps to go after running in the top 10. It just seems to be one of those bad stretches for the team, but we all know they could each finish in the top 5 on any given week.

This week the Sprint Cup series heads to Indianapolis. The speedway is probably my favorite track of all time, but quite honestly, the last few years, the races there just haven’t been filled with competition. Here’s hoping the low downforce package helps that at least a little. And since hometown favorite Tony Stewart has 49 career wins, wouldn’t it be something if he won his 50th at Indy? If you want to call it a sentimental pick that’s fine, but that’s who I am going with. The deep sleeper underdog who you might not think about pick this week is Kyle Larson. OK, he’s not that big of an underdog, but maybe this weekend is where that elusive first win comes for him as he has finished in the top 10 in the last two races at Indy.