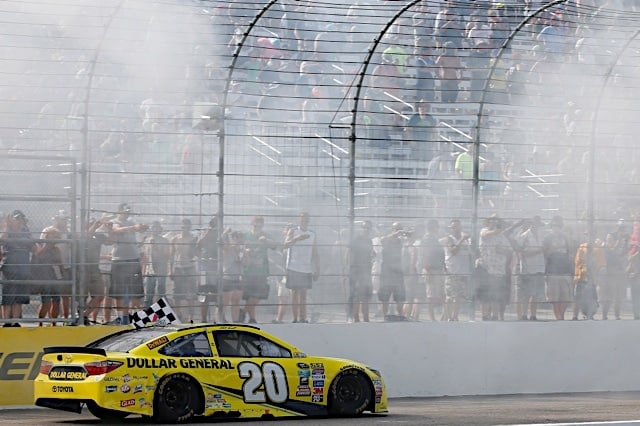 Starting from 18th position, Matt Kenseth went forward from the drop of the green flag, racing his way into the top 10. It wasn’t until 44 laps to go that the No. 20 car took the lead, never looking back.

There were a series of cautions toward the end of the 301-mile race, that juggled the running order around. Kenseth made the final pass for the lead on his Joe Gibbs Racing teammate Denny Hamlin with 30 laps to go after the No. 11 car stayed out while every other lead lap car pitted.

“I feel like we probably had the best car all day it just took forever to get there,” Kenseth said of his victory. “We got behind in the pits when I got myself blocked in and it took good pit calls and with a fast car we were able to make our way to the front. It feels good to get the win.”

The victory is Kenseth’s third at New Hampshire, each since joining JGR in 2013, and it marks his second-consecutive win as he was victorious last fall during the Chase.

However, following the race, NASCAR officials announced Kenseth’s No. 20 Toyota failed post-race laser inspection. According to Sirius XM Satellite Radio, this is the first time a winner has failed this portion of inspection. The car is being sent to the NASCAR R&D Center for further evaluation.

Spending much of the day outside the top 10, Tony Stewart took advantage of the late race incidents to finish second after roughing up Joey Logano late in the going. Stewart spent the majority of the day outside of the top 10, but moved through the field after the halfway point. The No. 14 car now sits 28th in the point standings, 67 points above the 30th-place cutoff.

“You can get up racing each other, but you still have to race the race track more than anything,” Stewart said of his second-place effort. “There were a couple of times when we were racing around guys and we would catch them, then just got too tight and would get right up to them. There weer other times when I pulled some veteran moves and didn’t really try to get up to them and race each other. That old age thing comes in to place once in a while.”

Throughout the first half of the race, Logano was a mired back in the late-teens. But with that rash of late cautions, the No. 22 car found themselves in second, ultimately finishing in third. It’s his 12th top-10 finish of 2016.

Kevin Harvick finished fourth after looking like he had the best non-JGR car early on in the event. The No. 4 crew struggled on pit road, falling outside of the top 10 twice, while pitting under the caution.

Greg Biffle rounded out the top five, picking up his best finish since New Hampshire last September. The top five result marks his third straight top-10 finish after going the first 16 races of the year without a top 10.

Jamie McMurray and Ryan Newman finished sixth and seventh, respectively, as both took the wave-around to get back on the lead lap with 37 laps to go.

Martin Truex, Jr. spent much of his day inside the top two positions, but came home 16th. While coming down pit road with 37 laps to go, his shifter broke and when he went to pull his car away in fourth gear, he lost the clutch. Though restarting sixth, the No. 78 car fell backwards immediately on the restart.

Truex was out front for 123 laps, second-most on the afternoon. However, tough luck bit the Furniture Row Racing team again.

Filling in for Dale Earnhardt, Jr., Alex Bowman posted a 26th-place effort after running in the top 15 for much of the race. That came to an end with 29 laps to go, when both he and teammate Chase Elliott cut tires in unrelated but simultaneous incidents, each pounding the outside wall.

Both drivers were on the verge of pitting due to tire rubs, but this hurts Elliott as he now sits 52 points above the Chase cutoff. Four weeks ago, the No. 24 team had a 100-point advantage over 17th position.

At one time in the event, Toyota was running positions one through five with all four JGR cars and Truex at the top of the board. The dominating performance saw Toyota lead all but two laps on the afternoon.

With their efforts, Busch and Carl Edwards have officially clinched a spot in the 2016 Chase.