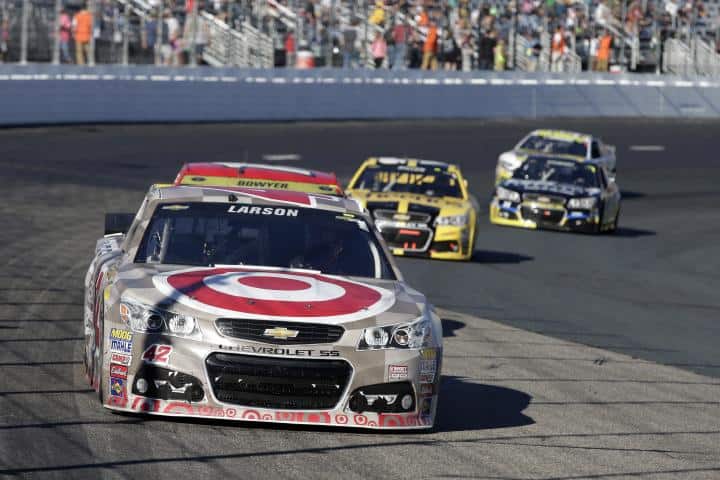 Change is occurring rapidly in the world of stock car racing. The newest breed of racers has kids racing late models before they are even in high school.

With plenty of paths to success, many young racers find themselves trying to be like Jeff Gordon or Tony Stewart, two NASCAR Sprint Cup Series champions who will dissolve from the racetrack over the next 14 months. The goals are crisp, as is the motivation to succeed, but in the modern era, money rules all.

The days of using a resume to get a top ride in NASCAR are nearly dismissive for team owners. A few wins on a piece of paper are nice, but it is the pay check that buys the tires and garners attention. In this era, it takes more than having skills behind the wheel. A driver needs to be more marketable than ever, and that is something that a large number of them are trained to do as soon as they begin to work through the rankings.

Ben Rhodes, reigning K&N Pro Series East champion, has experienced this first-hand. His sponsor, Alpha Energy Solutions – a local company from his hometown of Louisville – has backed him since 2013. However, with limited funding available for the organization’s marketing campaign, he has made just eight starts this year in the NASCAR Xfinity Series for JR Motorsports. Putting a halt to his progress, his remaining races are at Dover and then, he has over a month off until he returns to the seat at Homestead.

“I think the path to moving up is looking better for me,” Rhodes told Frontstretch.”There are a lot of guys looking to retire now in the coming years. It will leave a lot of empty spots in the Sprint Cup Series, so hopefully I can stay around long enough in the Xfinity Series and not get rid of myself too soon, stick around and create an opportunity to move up.

“You have to stay ahead on the competition side and then the marketing side. For staying ahead with the competition, you have to align yourself with the best team. JR Motorsports is certainly that, and we have some great people here. I just need to impress them internally. To stay in the sport, you need to have a lot of sponsorship behind you. I’m doing that by working my way around Louisville, where I’m from. In Louisville, there are only a couple of racecar drivers and I’m the only NASCAR driver in Kentucky. It makes it a lot easier to market.”

With a massive generation shift, there will be more open seats over the next handful of seasons, creating opportunities for drivers like Rhodes to capitalize on existing partnerships with race teams.

Kyle Larson has done just that. Teaming up with Chip Ganassi Racing with Felix Sabates, he put himself in position to become a key spokesperson for Target and all of the brands that support it. In one of the rare instances where talent gave a driver a mid-level ride in the Cup Series, he has capitalized on it, providing steady results for an organization looking to rebuild heading into the future.

However, Larson’s case, as rare as it is, could be repeated. Not every driver is going to have a 20-plus year relationship with a sponsor like Gordon had with Dupont/Axalta. But taking advantage of some of the sport’s elder members retiring could be a plus.

“What I love about NASCAR, and I had a conversation earlier today [Friday], talking about the first time I ever went to Charlotte and was pursuing stock cars and I didn’t know a lot about stock car racing and racing cars with full bodies on them,” Gordon said during a press conference at Dover International Speedway. “When I was racing sprint cars in the Midwest and growing up in California, but I was in awe of it immediately, I knew that this was for me the first time I traveled to North Carolina and went to Rockingham and saw that track. I saw Charlotte Motor Speedway and when I got behind the wheel of that stock car on those high-banked tracks, being on ovals especially, I was just so drawn to it and I knew it was for me.”

No one knows as of yet what will happen with Bass Pro Shops when Stewart hangs up his helmet. His replacement, Clint Bowyer, anticipates that longtime sponsor 5-Hour Energy will accompany him to the No. 14 car. The gap left in the season could give Bowyer the additional funding he needs for that ride, but what if they want to sponsor one of the Dillon brothers? Ty Dillon is expected to make the jump full-time to the Cup Series next year given the sponsorship backing, even though he has only one victory in the NXS. Given his vast experience at marketing, bringing in sponsors such as WESCO and Yuengling, he could be a viable option for potential owners.

But for those who can’t bring in millions of dollars, such as Rhodes at this time, running part-time is about all one can expect. Tarnishing the learning experience, drivers cannot find a way to stay consistent in the seat.

Said Rhodes: “In the time that leads up to a race event, I spend my time watching film from last year’s races. I spend that time looking at data and driver telemetry. I look at setup sheets and I do simulator time on iRacing. It’s just a lot of different stuff, anything that I can do to prepare mentally for an event, I will do it.”

As the generation moves along, it will be increasingly important for drivers to position themselves in a strong position with partners. As Gordon eluded to, “talent is the biggest overriding factor of hiring young drivers.”

“The great thing about that is that it doesn’t matter when you come from or what kind of racing you grow up on, other than I think it needs to be oval driven, but it doesn’t have to be a stock car,” said Gordon. “It doesn’t have to be a big, heavy car that is racing at the same tracks or similar tracks, similar cars. It can be open-wheel sprint cars and midgets and it can be go-karts. It can be all kinds of different paths that get you there.

“The car owners, the sponsors, the teams they embrace wanting to bring individuals, give them a chance, taking a chance on them because they believe they have the talent to go win races and championships and create the funding it takes to go racing based on that. We have proof of that with a guy like Kyle Larson, with an up and coming guy like Chase Elliott and that is exciting. That is what drew me to it and I think that is what is going to continue to help this sport thrive in the future.”