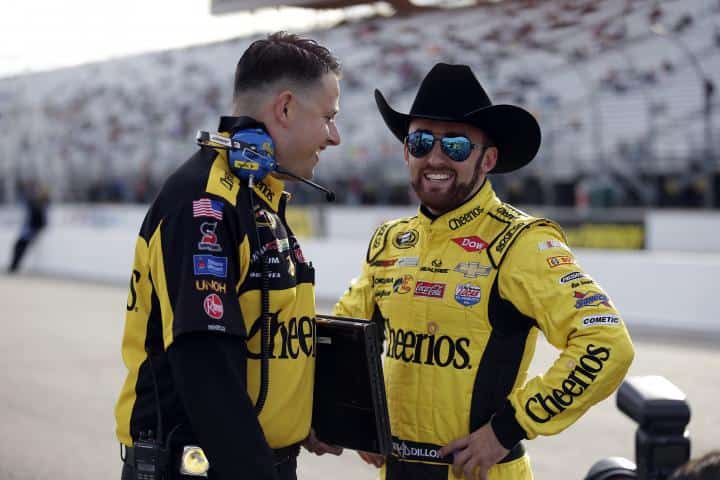 The drivers roll into Loudon, N.H. this week, and that means we’re back to some short-track racing. When it comes to short track racing and NASCAR Fantasy Live, we need to focus on one item pretty closely, and that is the laps lead number. So for this weeks race, we want to put some drivers that were fastest in the practice sessions on the team and not worry too much about the place differential points.

After watching the practices and looking at the averages – especially the 10-lap averages – it is pretty clear the Joe Gibbs Racing cars brought their “A” game yet again this week. I think that my team this week will probably skew towards the JGR guys. I also liked the way Brad Keseslowski looked and Kevin Harvick was fast as well. I think Harvick and his team will be out to prove a point and that makes him even more dangerous for the competition this week.

Enough chit-chat. Let’s get to the picks. Now I am doing something a little different in the Chase and not carrying over my prices from the previous weeks so each week is a team that you can duplicate.

Harvick will be out for one thing this week and that is a win. Harvick dug himself into a bit of a hole last week with the run-in with Jimmie Johnson and set off a media firestorm with his punch to Johnson’s chest. Harvick showed great speed in the practices and was on top of the single-lap leaderboard for Happy Hour. I think some of the JGR guys showed better long-run speed but Harvick should be a factor throughout the race. Harvick rolls off on the outside pole, and that is a great starting spot for a car with that much speed and even more to prove.

Busch showed a lot of speed speed late in final practice as well and and was the second fastest car on the 10-lap average chart. Busch won this race in August, leading nearly 100 laps in the process. The No. 18 starts in the 17th position, which is a bit far back for my liking, but he should be a factor within the first 100 laps. On top of that, the place-differential points should be a nice little bonus for us. Like most of the JGR drivers, Busch has been very fast the last 10 weeks or so, and Loudon should be no exception.

Edwards starts on the pole this week and was consistently one of the fastest cars in practice. In the August race here earlier this season, he also started on the pole and led 19 laps before ultimately finishing seventh. I think that with the speed the JGR guys have continued to show and the way Edwards looked in the practice sessions, he could be a wire-to-wire leader. For the sake of our fantasy lineup, let’s hope that at the end of the day, we are watching a backflip.

I like the way the Richard Childress Racing teams looked last week and they are looking like a good pick this week as well. Dillon has been running better during the races and its only a matter of time before the finishes start to show it. Dillon starts 16th this week and I think that looking at the lap times he has a top-10 car. Plus, he won the Camping World Truck Series race on Saturday afternoon. Let’s hope he lives up to his potential.

Burton qualified 41st, and that’s right where you want your cheap fill-in driver starting. Lets hope he keeps his nose clean and can move up through the field with a little help from attrition.

Again, I think Harvick will be out to prove a point this week and will be extremely difficult to beat.

When you go Harvick, you have to go Chevy.