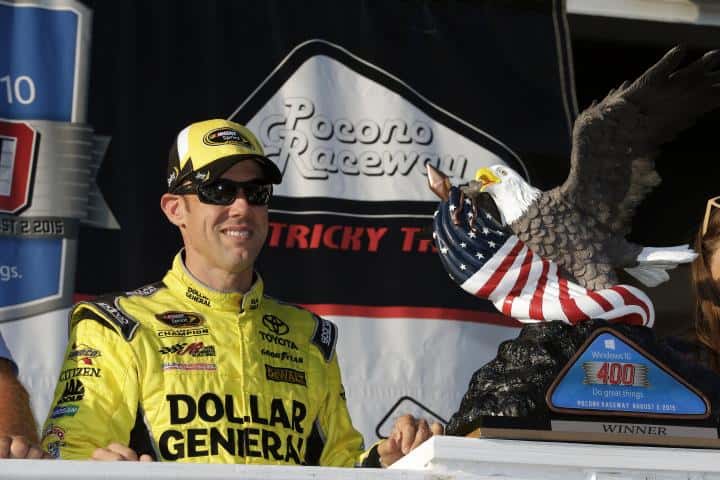 It was quite the interesting day at Pocono Raceway. It’s billed as an oval race, but the strategy used there is something more similar to a road-course race. Of course, Pocono is unique because it is shaped like a triangle. The track calls itself the Tricky Triangle, and there were plenty of tricks up its sleeve in Sunday’s Sprint Cup race.

This is one of those races where it took a true team effort to win for Matt Kenseth and crew chief Jason Ratcliff. With so many cars running out of fuel in the final three laps of the race, including race leaders Joey Logano and Kyle Busch, it was Ratcliff who had the right calculations to give Kenseth concerning how much fuel he needed to save. And also, give credit to Kenseth here for knowing how to save fuel when it turns into this type of race. It’s true, Kenseth did not have the fastest car of the day, but when the race turns into a fuel-mileage game, then it does take a special skill to know just how to get in and out of the corners at just the right pace in order to save fuel. So, yes, in some ways, you can say he backed into this one, but in other ways the No. 20 didn’t because Kenseth knew how to save that precious fuel.

I’ve seen some comments on social media in the past few days with fans complaining about Chase strategy. But let’s be perfectly honest here, if it weren’t for the current Chase format, where the emphasis is on winning, would we have seen so many cars try and stretch their fuel mileage in order to win Sunday? I think we all know the answer to that is a definite no. So on this day, you have to give the win-oriented Chase a big thumbs up. There was no so-called points racing going on here, but there were a lot of drivers who were trying to figure out a way to win a race and more willing to gamble to get that victory. It was quite nice to see that.

Sunday had the makings of being a pretty bad day for Brad Keselowski. It was on lap 58 when he slid through his pit box and hit two crew members, also causing his crew to lose a tire. The result was a penalty for the stray tire, but luckily no one on his crew was injured. But Keselowski and Paul Wolfe, who have won at Pocono before, kept their heads and strategized (I know that’s not a word, but work with me here) themselves into a second-place finish. Now, Keselowski already has a win, so the points gained with that second place aren’t a huge deal, but it just as easily could have been a 30-something finish for the No. 2 team.

OK, so Kyle Busch didn’t become just the third driver to win four straight races in the past 22 years, but the fact that he came less than a lap from doing that was still pretty impressive. Busch is the one driver to whom the points really do matter, but he and crew chief Adam Stevens went for the win anyway. And even with a 21st-place finish, Busch is still just 13 points out of 30th with five races to go in NASCAR’s regular season, so, really, it would still be a major upset if he doesn’t reach that top 30 spot and be one of the favorites in the Chase for the Championship.

There’s no reason for Kevin Harvick and the No. 4 team to panic. The defending champion has two early season wins and is leading the points standings. But after blowing an engine in the early stages of Sunday’s race and finished 42nd, you know Harvick wouldn’t mind returning to Victory Lane sometime soon again. Harvick and his 18 top-10 finishes is still a series best and he and his team are still one of the favorites in the Chase. However, they don’t want to make these early exits any kind of habit.

Ryan Newman survived a severe points penalty from earlier this season to move up into the top 16 in points to be Chase eligible. While Newman has been pretty consistent as usual, he still doesn’t have a win to fall back on and since he finished 23rd Sunday, he has a 25-point edge over Kasey Kahne (let’s assume Busch is going to make it in at this point, meaning Kahne would be on the outside of the Chase looking in). Newman either needs a win, or he can’t afford too many of these 20-something finishes or he may well be the one on the outside of the Chase standings after the regular-season finale at Richmond.

One of the places not to be this weekend at Pocono was in the pits. First, there was Jeb Burton’s slide into the wall during practice on Saturday. Then, Kahne slid hard into the inside pit wall early in Sunday’s race sending a few helmets sitting on the wall flying. Then, also, there was Keselowski sliding through his pit stall and hitting his jackman. Luckily, no one was injured in any of these incidents. However, after the Kahne incident, where there were some pit crew members who obviously did not have their helmets on yet, don’t be surprised if NASCAR makes it mandatory for all of the pit crew members to have their helmets on once the green flag flies.

The disappointing season, and, well let’s face it, Sprint Cup career, of Ricky Stenhouse Jr. continued Sunday. He ended up with a 41st-place finish after smacking the rear end of Sam Hornish Jr., causing severe damage to the front of Stenhouse’s car. The thing about this accident, is that it could have been avoided as the car directly in front of Stenhouse swerved to miss the slowing Hornish, so you would think Stenhouse would follow suit as that type of move is pretty uncommon on the track. But instead, he stayed the course and was left with another day where he could have done better. He now has just nine top-10 finishes in 97 career starts.

Spin the perceived “positives” of “The Chase” all you want. Chase sucks and so does this moronic incantation.