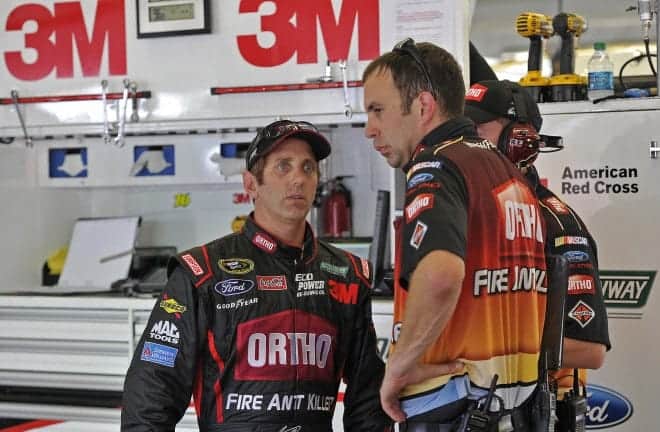 New Hampshire Motor Speedway was a race to forget for Matt Puccia, driver Greg Biffle and his No. 16 Roush Fenway Racing team. After spending a day off the pace, running two laps down in 27th Puccia is more than ready to head toward the Racing Capital of the World.

Indianapolis Motor Speedway is always a challenge for NASCAR Sprint Cup Series cars; after all, there is an extensive amount of strategy and pressure just because of the venue. Now, the teams are going to have to deal with a completely new aerodynamics package, high-drag and high-draft that has never been run before.

This week in Tech Talk, Puccia discusses dealing with being behind all day at Loudon and trying to learn for the next race while still trying to salvage a finish in the current one. Looking ahead to Indy, he talks about the new aero package, data acquisition, rear gears and joins the rest of us in not really knowing what to expect.

Mike Neff, Frontstretch: Loudon was obviously not the outing you were looking for. What do you feel was the main thing you were lacking up there that resulted in a 27th-place finish?

Matt Puccia: It wasn’t totally disastrous. We got behind early in the race and when you get behind early, it is hard to play catch up and you have to do things you wouldn’t normally do. The leader comes around and is on your tail. You want to stay on the same sequence as the leader so you pit when he does. Then, the caution comes out and you are caught a lap down, where the leader was in a position so he’s still on the lead lap. Later in the race, we tried to go long and the caution didn’t come out until a lap after we were forced to pit. Every time the caution didn’t need to come out, it came out and every time we needed it to come out, it didn’t.

That was really unfortunate, but that aside we still didn’t have the car we needed. The car was really tight in the center, we couldn’t get that out, we fought that the whole weekend. We got it to where we thought we were going to be able to race with it on Saturday during practice. But when the warmer temperatures hit on Sunday, we just weren’t able to get the speed and grip we needed.

Neff: When you are having a day like that, do you ever get to a point where you wave the white flag and start testing for your next trip up there or do you keep digging until the very end?

Puccia: We were doing both. We were making some pretty significant changes. You are kind of limited to very few adjustments now. They took the track bar away from us; that is in the drivers’ hands now. We made every effort we could with the tools that we have on the car that we can adjust. We just couldn’t get it to move the needle. We made some pretty significant air pressure adjustments, not only to see if we could move the needle in the grip but also to see if we could learn something for when we come back. We learned a little bit but learned a lot of what not to do when we go back. It was really unfortunate and we were very disappointed in our performance. That’s part of racing; we’ll learn from our mistakes and move on.

Neff: To say there are significant changes at Indianapolis this weekend is an understatement. Is there anything that you can utilize from your previous visits with this new setup?

Puccia: I have no idea (laughs). Just in talking to people and our group, there are a lot of unknowns going into this weekend. We think we have a pretty good handle on what this car is going to want. I think it is going to be a lot different from anything that we’ve had to deal with in the past. It is going to behave a lot differently than the current aero package. I think there are a lot of unknowns and the first laps on the racetrack are going to give you an idea of whether this is real or not and we’ll see where we’re at. I feel like we’ve got a pretty good handle and a pretty good plan on what we need to answer on Friday. We’ve got data acquisition on our cars, NASCAR has allowed us to have data acquisition on our cars on Friday to help us sort some of these questions out. I feel like we’ve got all of the tools that we need to be able to figure it out on Friday.

Neff: You mentioned having data acquisition on the cars on Friday, which is something they don’t normally do. That makes it almost like a test session. How much of a test session feel do you think there will be on Friday?

Puccia: It will feel a lot like a test session. We’re bringing our engineers with us, and there is going to be a lot of data viewing just to sit down and analyze what we’ve got. The biggest questions that we’ll answer on Friday is, is the information that we’ve been seeing for the last couple of weeks since this rule announcement real? Does it correlate to what we’re actually doing on the racetrack?

I think it is really good that NASCAR is allowing us to have the data. I think it will allow the practice sessions to go much more efficiently. On a normal race week, you’re just going off of your driver and your simulation to give you an answer. Now, with data on the car, it will answer your questions much more quickly.

Neff: How much have you been able to simulate through computer programs and when you do those simulations, what do you have for a baseline?

Puccia: It is still Indy and you’re still going to go off of history and what you know. You go off of what the current package is and what we’ve been racing. What the aero package is that we’ve been racing and what the engine package is that we’ve been racing. You base it all off of that. We were fortunate enough to have a teammate go up there and test back in April to get a decent baseline with the original rules package for 2015. We have a baseline off of that and we can adjust from there. Our SIM tool is very crucial in being able to see balance trends and differences with this package. I feel like we have a pretty good handle on what we’ve got and a good plan going into this weekend.

Neff: Is the rear gear going to be an additional challenge pushing that giant rear spoiler through the air, or is it something they’re going to be flexible on depending on how things play out on Friday?

Puccia: On a typical race weekend, NASCAR gives us one gear as a primary gear and an option gear. Seeing as there are a lot of unknowns, and we’re going to be guessing where we are RPM-wise, NASCAR has given us a list of gears they want us to bring along just in case – to be prepared. They’ll be taking a close look at that all through practice and seeing if we need to adjust accordingly. It will be just like we did when we went to Kentucky. It will be interesting to see that, too.

Neff: That giant rear blade sticking up in the air, it would seem that would try and lift the nose of the car up some. Is the splitter extension and the radiator pan going to be enough to offset that and keep the nose of these cars in the track?

Puccia: I think so, but that is another one of those unknowns right now. Looking at all of the data, you would think so. NASCAR has done a good job of offsetting the balance of what we’re going to have in the rear with the blade and the tail extension by putting the bigger radiator pan on it. It should… on paper, it shows it should be close to what we have, although time will tell. Once we get to the real dyno – the real simulation tool – when we get to the racetrack, we’ll find out.

Neff: With this drag package on these cars, they are going to run more like trucks than cars. Does that play into your fuel mileage? Indy can always be a bit of a fuel game; is this race going to require more gas to get these things around for 400 miles?

Neff: If we get this back to the slingshot pass days of the 1970s and ’80s, is it going to be even more mentally taxing on the drivers to plot and plan their strategies of when and where to make passes?

Puccia: I think so. At the end of the day, Indy is still about the handling. I don’t think – and I could be totally wrong – this will ever be a track where you can run the thing wide open around the entire track. Handling is going to be a big part of it and the guy who can stay in the gas and stay in the power off the corner is the guy who is going to be able to make a run down the long straightaways they have in Indy and be able to make passes. The draft is going to be a huge part of it. It was a big part of it last year but it is going to be an even bigger part this year with the aero package, with less motor than we had last year. I think you’re going to see a lot more of the draft coming into play.

Neff: What would it mean to win Indianapolis?

Puccia: Indy has been a pretty special track for me; I remember going to Indianapolis with my father when I was young for Indy races. It is always a cool place when you go in there. There is always a different sense when you go in there and the first time they come down that front straightaway you’re like, “Wow, this is cool!” Since I started Cup racing and being a crew chief in the Cup Series, it has always been one of those tracks that I have had circled on my radar that I want to get a victory there. It would be pretty huge to get a trophy and kiss those bricks on Sunday.