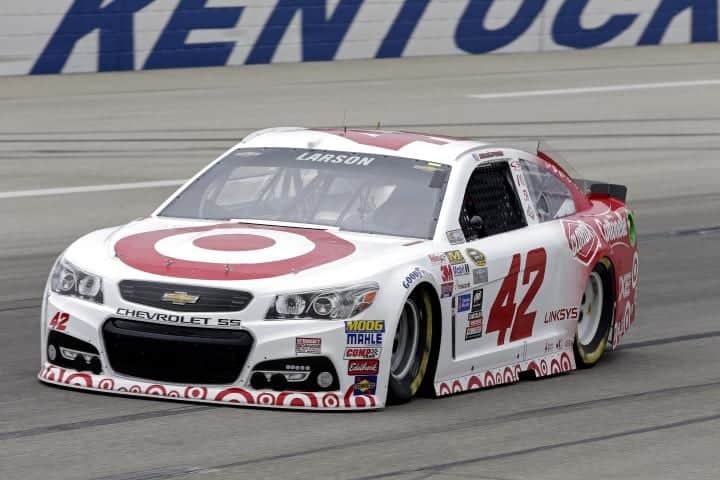 In Friday’s first practice session, Kyle Larson set the quickest time on the session in qualifying trim. In the second session, Larson managed the same feat in race trim.

Larson put down a 178.412-mph lap to top Friday’s 90-minute final NASCAR Sprint Cup Series practice before Saturday’s Quaker State 400. Larson, who will start on the pole in tomorrow’s race, put down the fastest lap in both Friday practice sessions with the new low-downforce rules package.

Brad Keselowski ended the final session in second, with an a speed of 178.124 mph. Keselowski, the only two-time winner at Kentucky speedway, will roll off second in tomorrow night’s race.

Johnson and Kenseth were responsible for the session’s two biggest incidents. Johnson was on a practice run early in the session when he claimed to have hit a weeper and washed up the track. His No. 48 Lowe’s Chevrolet came into contact with the outside wall on the exit of turn 4, forcing him to the garage area to repair cosmetic damage.

Kenseth was making his last run in the closing minutes of the session when he lost control of his No. 20 Dollar General Toyota coming off turn 4. Kenseth spun, sliding to a stop in the rain-soaked infield grass and getting stuck to force the session’s only caution.

While there were no more incidents, there were close calls on pit road. Kentucky’s garage area allowed only one path to enter or exit the racing surface. The tight path led to an incident between Cole Whitt, Sam Hornish Jr. and Danica Patrick in the first practice session. NASCAR avoided a similar incident in the final session by placing officials on either side of the tunnel to direct traffic.