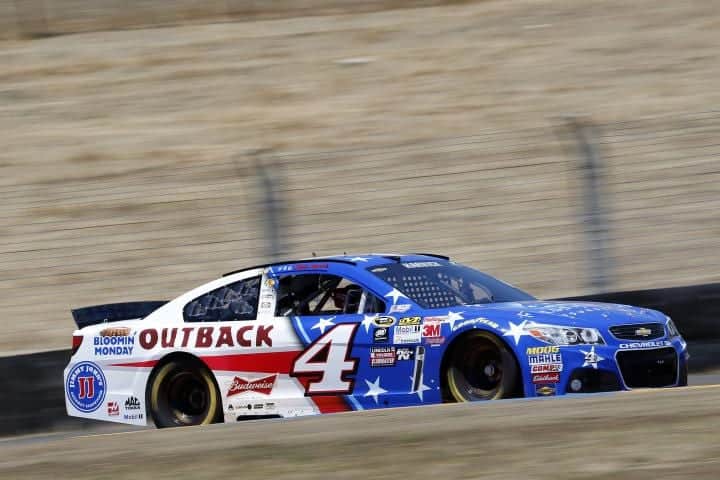 This week, the racers will be doing something they only do two times a year: turning right. The teams are in wine country for the Toyota Save Mart 350 at Sonoma, this year’s first Sprint Cup attempt on a road course. This race is one where some underdogs will rise to the forefront, announcers saying names we don’t hear much on oval tracks. One of those, AJ Allmendinger, had a great run in qualifying and snagged the pole for Sunday’s event. Allmendinger ran well in both road course races last year, winning at Watkins Glen but had a disappointing finish after leading 35 laps here at Sonoma.

Generally, the way I play NASCAR Fantasy Live at road course races is looking for drivers who are strong at these tracks, pinpointing those who are starting mid-pack or towards the back to score place-differential points. I would look at someone like Dale Earnhardt Jr. or Kasey Kahne, both drivers who had subpar qualifying runs as good “move through the pack” guys. I struggled with on taking Allmendinger or keeping Carl Edwards on the team this week as both run well at this place. What did I end up doing? Take a look below.

As always, the prices listed are prices you would have if you have been following along with my team.

No. 4 Kevin Harvick $28.00
Harvick has been a good road racer at times. Kevin qualified 17th so he should move up through the field and score some nice points. I don’t think he is as much of a threat to win as his teammate in the No. 41 car but he should have a top-five effort. With the dollar in the bank that we are carrying on Kevin we pretty much just have to roll with him this week.

No. 78 Martin Truex Jr. $22.75
We have a dollar and a half in the bank with Truex and we should have more after this race. Truex won this race in dominating fashion two years ago with the way he has been running this year I wouldn’t doubt he will be a threat to win. Truex will be starting 12th which is two spots better then where he won from in 2013.

No. 41 Kurt Busch $22.50
Kurt has been a great road-course racer at times but seems to have trouble putting it all together for the full distance. Kurt won here in 2011, driving Roger Penske’s car and with the way that he has been running this year I think he just might dominate again this week.

No. 19 Carl Edwards $21.25
I struggled with this pick. I really like Allmendinger at this racetrack, but Edwards has been fast here pretty consistently over the years. Starting 14th, the consequences of a melee taking the No. 19 car out of the race is less than Allmendinger who starts on the pole. The place-differential points if he just makes it to fourth would be the equivalent of 20 laps led; it’s the extra “fantasy squeeze bonus” you can get that a pole sitter just won’t offer you.

No. 26 Jeb Burton $4.75
Jeb starts shotgun on the field which is pretty much where we want our back of the pack cheap guy to start. Let’s hope he can keep his nose clean, avoiding some of the wrecks and he should move up a bit.

Race Winner: Kurt Busch
Kurt has his mojo back. Already a two-time race winner, he’s capable of going for broke and I’m interested to see how that manifests on the road courses this year.

As always, if you have any questions about your lineup feel free to leave a comment in the comments section and I will be checking and responding to any questions. Also, check in after last practice as I may modify the lineup a little. Thanks for reading!