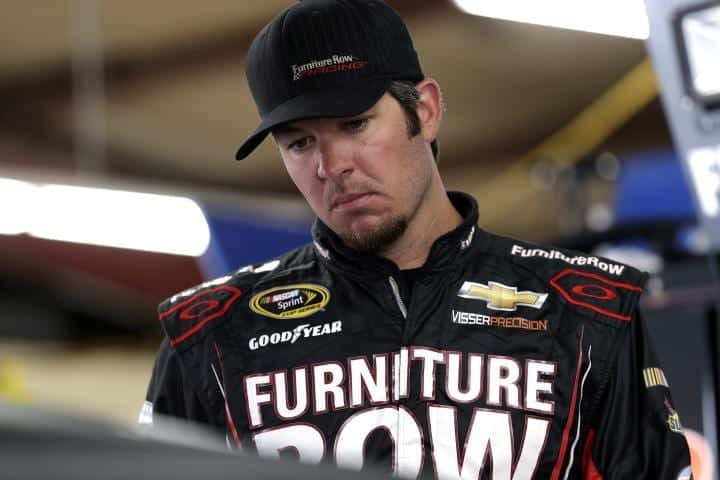 It was just hard to tell who was hot or not and during Sunday’s Sprint Cup race at Michigan. It was all due to the weather as the 400-miler that eventually ended up being a 276-miler was an on, off, on, off and yet on and finally off for good event. Here is a look at how it all shook out.

I would agree with the TV folks that crew chief Tony Gibson is a good match for Busch. Gibson is not the type to tip-toe around with how he says or does things. He is the type to make it clear he is interested in winning and maybe that’s the type of personality that Busch needs on top of the pit box. A little more no nonense attitude from his crew chief may be helping Busch act at least a little more sensibly so far this season. Busch missed three races this season and now sits 11th in points with those two wins, so there is something right going on there for the No. 41 team.

OK, so Martin Truex Jr. couldn’t win two straight, but if the race had gone the full distance, he may have had a chance at it. Truex didn’t lose much, if any, momentum with a third-place finish Sunday. With Kevin Harvick’s 29th-place finish, that leaves Truex with the most top-10 finishes this season with 14 top 10s in 15 races. So, there was no victory hangover for the No. 78 Furniture Row Racing team. In an era where well-funded multi-car teams rule this sport, it’s hard not to pull for this single-car team that’s based in Colorado, of all places, unlike the rest of the teams that are based in the Charlotte area.

Kyle Larson hasn’t had the kind of season he was hoping for so far, as he sits 18th in points, 39 points shy of 16th place for the final Chase spot. But Larson, with what all would have to agree was a good gamble by crew chief Chris Heroy, came within about two minutes of being the winner Sunday. No, he didn’t finish that far behind Busch, but trying to stretch a fuel run and knowing the rain was coming, Larson was in the lead when he had to pit on lap 132. The rain came on lap 135 after Busch had inherited the lead. Had Larson pitted on schedule like the rest of them, he would have finished somewhere around 10th. He ended up finishing 17th, so if he does not win before the regular season finale in Richmond in September and does miss the Chase, he and Heroy just better hope that gap to 16th is more than seven points. But nonetheless, you have to like somebody going for the win rather than worrying about points racing.

Matt Kenseth is generally one of the sport’s quiet guys (OK with the exception of that fight last year), and even though he does have a win in the No. 20 Joe Gibbs Racing Toyota this season, he’s in the midst of another quietly consistent season here in 2015. Kenseth finished fourth Sunday and now sits eighth in points with nine top-10 finishes, tied for fifth-best on the circuit.

For a driver who has been in the deep freezer for most of the season as far as his finishes have been concerned, it was nice to see Trevor Bayne earn his first top 10 this year with a ninth. Bayne still sits 27th in points, but now each of the first 28 drivers in the points standings have a top-10 finish. This is not the type of finish that makes a driver’s season, but at least it is a step in the right direction for the likeable young driver. Bayne and the No. 6 team can only hope there are more of these days coming on a consistent basis this season.

There was a glimmer of hope for Tony Stewart at Michigan, where he qualified 15th and then was as high as eighth at one point after one of those crazy restarts. But from that point on, Stewart pretty was going backwards and he eventually finished 28th one lap down. If you would have told me he would finish ahead of Harvick in this race, I would have probably gambled and taken that bet. Unfortunately, Stewart didn’t get it done.

Kyle Busch certainly looked like he had a top-10 car on Sunday and for him, you can understand how every point is valuable. Busch missed the first 11 races this season due to injuries suffered in an Xfinity Series crash at Daytona. So, along with the obvious mission of needing to a win a race to make the Chase, he’s also in a race to reach in the top 30 in points in order to be eligible. But when his car veered right and into the wall without being touched Sunday, it put a big dent in Busch’s efforts to reach the top 30. Busch now sits 39th in points, 173 behind 30th-place Justin Allgaier. Busch’s 43rd-place finish Sunday means he gained on no one and he won’t be able to take any more 30- or 40-something finishes and reach that 30th-place spot this season.

The one thing we can all agree on is that the weather was a major pain in the butt Sunday. Whether you are a fan at home trying to watch on TV, a fan at the race constantly wondering when they are going to be able to start again, a crew chief trying to figure out a setup for a track that had a lot of rubber watched off it and what the right pit strategy was, or the driver constantly being ready to go mentally and emotionally and then constantly having to turn those buttons off and on, it was not easy to deal with. Hopefully, there won’t be many more races like that one in 2015.