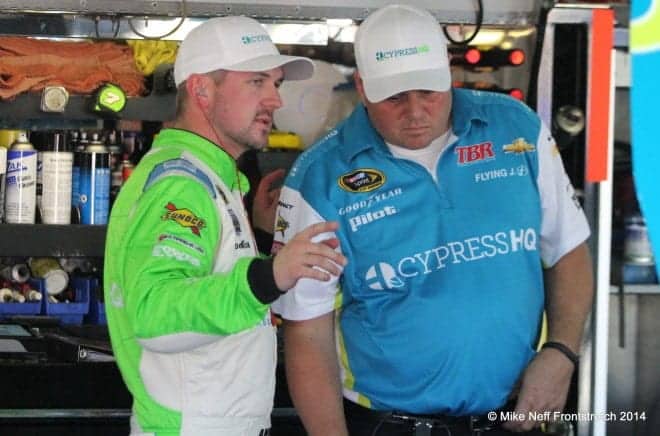 Kevin “Bono” Manion is back to working in a two-car operation. He worked for several years at Chip Ganassi Racing with Felix Sabates and won some of the biggest races in the sport. He was employed at Tommy Baldwin Racing last year and the beginning of this season but he’s on top of the box for the No. 9 of Richard Petty Motorsports with Sam Hornish Jr. at the wheel.

The change is in its infancy but as it unfolds we will be here to ride along as Manion talks to us every month in Tech Talk.

This week he touches on harmonics and gear shift breakage, strains on the valve train and the different challenges presented by Pocono. We also discuss the new engine rule and shifting gears to maintain higher rpms and learn a bit about shims, bump stops and the technical policing of shock absorbers.

Mike Neff, Frontstretch – Since the last time we talked you’ve switched addresses. What is it like working over at Richard Petty Motorsports?

Kevin ‘Bono’ Manion – It is really cool, a lot of fun. It is a good family atmosphere, a good two-car team. Just small enough yet just big enough. There is a lot of room to grow. Everything is pointed in the right direction; they made the Chase last year with Aric [Almirola]. There’s a lot of stuff going on with high hopes for this No. 9 team and Sam; there are a bunch of good races coming up for us. Really excited to be back to a nice, small, two-car team that has a lot of potential and a lot of growth opportunity.

Neff – How did you feel like Dover went for you? It looked like passing was almost impossible once the field got strung out.

Manion – Passing was tough for sure. We had a jack break on pit road. We were on pit road one time when the caution came out. We couldn’t get anything to go our way for sure, but we felt pretty good about our car. It was just the wrong place at the wrong time for us at that race. We definitely need to get a little more speed out of the car. Dover was just OK.

Neff – Now we are headed to the three-cornered speedway with the longest straightaway in the sport up in Pocono, Pa. How do you feel about heading to that joint with this new engine package?

Manion – That is definitely going to throw a wrench in there. We’re going to be shifting, I’m sure. It is just one of those places where, as you mentioned, we have the longest straightaway in the sport. What do we do for the race? Get the car as low as we can so we can get down the straightaway, get it out of the air with the least amount of drag to get the speed out of the car. The spoiler down, the rear of the car down but then you get to turn 1 and you have to get through the turn. You get it turned and then you have to hustle it down the Long Pond straight and get it over the tunnel. Then you have one of the most important corners you see all season with turn 3 because you have to get through there and get to the gas so that you can use every bit of that Roush-Yates power to get down the front straightaway.

It is a really unique track and a really fun track. It can be really frustrating or a lot of fun. Drivers get to shift and they stay pretty busy on a lap. They have that long straightaway to get a little rest but that is also where they can draft up onto someone and pass them before turn one. There is a lot going on there and we get about 55 seconds before the car comes back around. We can talk quite a bit and don’t even have to use the radio sometimes.

Neff – Do you feel like they will shift on the Long Pond straight as well as the front straight?

Manion – Yes, I’m sure – similar to years past, depending on how you have your car set up. From qualifying to the race will be different, too. Race speeds might be up and you might not get the rpms as low in a corner, which would keep you from shifting. With the new package and the new gear rule it is going to be a little different for everybody. It is one of those things where, we’ll get there and have the ability to downshift and get the rpms back up, but right now we’ve thinking they’re going to be shifting everywhere for sure.

Neff – What material do they make the packers and shims out of for the bump stops to keep them from collapsing when they are under such a heavy load for so long?

Manion – Some people use a stainless steel, some people use a high-grade aluminum, some use a high-grade plastic. I believe the plastic is called PEEK. Each team runs something different. We have shock teardown every race day morning where the officials will take one of the shocks off of the car from the previous week that won or sat on the pole. They lay the parts out and that is kind of how they police and not police the shock and bump stop rules. The rules are pretty open but it is also open from the standpoint that everyone can see what you’re doing inside, so to speak. It is kind of a catch-22 with them doing that. Every time we go up there we see all kinds of people that run all different kinds of material. There are different kinds of bump stops; this year and even last year we were allowed to run a shaft spring along with a rubber style bump stop. There are all kinds of parts and pieces out there and every day the engineers work to come up with the latest and greatest.

Neff – When you go through the corners you are giving the engine a bit of a rest. Does the length of that straightaway pose an extra challenge to the engines in these cars or does the break it gets in the corners alleviate the strains of excessive rpm load on the motors?

Manion – It definitely does; any time you are down shifting and up shifting at speed you are definitely putting added strain on the engine. Those sustained rpms for a long time are a factor at places like Michigan, California and Pocono. Pocono is probably one of the hardest places still. We do see some failures there, whether it be gears, transmissions or axles. All of that stuff keeps adding up. Engines and valve trains, anything under strain. You’re shifting so you can wheel hop and that gets into the drive shaft and causes vibration. It is very, very grueling on your drive train for sure.

Neff – Speaking of the drive shaft, earlier this year in one of the Tech Talk issues, a crew chief was talking about the gear shifter failures and they spoke about the harmonics of the drive train because it was ending up in a straight line due to the car being down on the ground instead of having some angle to it. Do you think having the drive train of the car in a straight line for the extended period of time will lead to gear shift failures, not to mention all of the shifting involved?

How low we are going to be? At Daytona we have the cars extremely low in the back, which creates different angles. I don’t think we’ve seen any of those break for a while so maybe the teams have gotten onto that or fixed their vibration issues by aligning the drive shaft correctly. The drive shaft has a universal joint on each end but that doesn’t mean it can go any direction. It has to be equal and opposite to work 100% efficiently.

Neff – Haven’t seen the tire sheets yet for this week. Are we using the same tires that we’ve had for the last few years since they repaved the track?

Manion – Yep, it is the same tire as last year. That makes it a little easier on the teams. The information that we had last year will work this year. We have our tire pressure information and we have a history with the tire. We know toe settings and camber settings. When your engineers and crew chiefs are sitting down working on a setup it definitely takes some of the question out. You can look at your wears from last year and some of your tendencies to help guide you to your decisions.