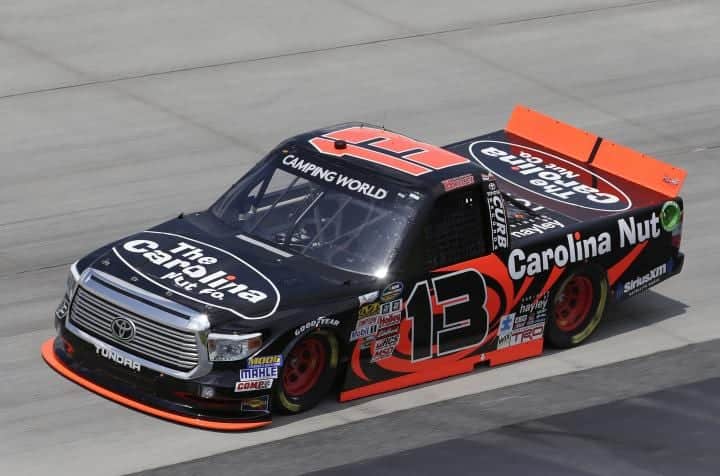 After finishing inside the top five at Kansas, the NASCAR Camping World Truck Series’ lone full-time Canadian driver has finished 14th or worse in the past two races. However, entering Dover, a track that he was raced at in the past, Cameron Hayley believed he had a truck capable of contending for a victory.

The 18-year-old driver was running inside of the top five for the majority of the Lucas Oil 200 at Dover International Speedway when his engine began to experience sudden issues. Coming close, but not close enough, Hayley had to pull into the garage with 70 laps remaining in the race.

“We just dropped an engine,” Hayley explained post-race. “We lost a valve spring out of it, and that’s all you can do. We had a great truck today and ran in the top three most of the race. We were on the perfect pit strategy. We lost the motor and tried to get back out, but it was done.”

Finishing 21st at Dover, Hayley sits seventh in the Truck Series championship battle. His Thorsport Racing teammates, Matt Crafton and Johnny Sauter, are first and fourth, respectively, in the standings. Hayley has one top five this year and has an average finish of 14.7 through six events this season.

Heading into the next stretch of the season, he believes he has caught up to his teammates in terms of speed.

“I said three races back that I wasn’t quite fast enough to run with my teammates, and I think we are there,” he said. “We were the fastest Thorsport truck out there today, and I think we were in contention for the win so it is huge.”