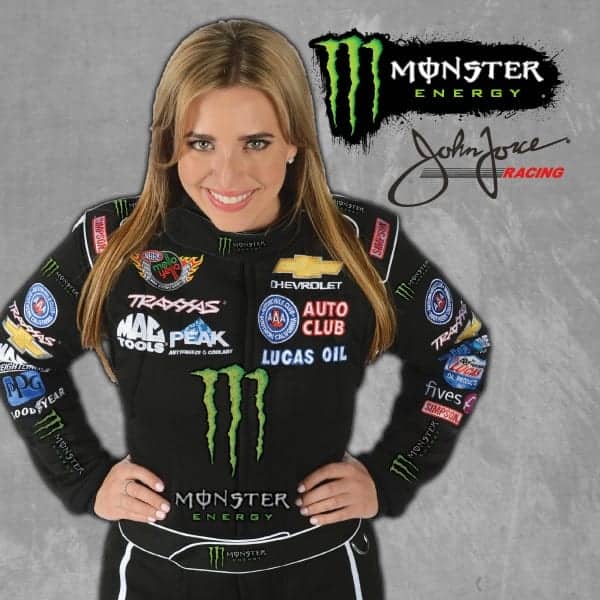 Beginning this weekend in Atlanta, Brittany Force will sport the colors and logos of Monster Energy Drink on the sides of her Top Fuel dragster. John Force Racing and Monster Energy have signed a multi-year agreement that will put the energy drink on the car for the remainder of this season and beyond.

“I am so excited to be teamed up with Monster Energy as the primary sponsor on my Top Fuel Dragster. You see the Monster logo on everything from NASCAR to Action Sports and to have them back in the NHRA seems like a perfect fit. The great thing about partnering up with Monster is how easy it will be for me to promote their brand because my team and I love to drink Monster. I can’t wait to get them into the winner’s circle. My whole team is fired up and we will definitely unleash the beast starting this weekend,” said Brittany Force.

John Force gave much of the credit for pursuing and securing the corporate deal to daughters Courtney and Brittany, who had been working to seal this deal since last year. John Force Racing has been working hard to regroup and rebrand the departure of long time sponsor Castrol and manufacturer Ford following last season.

“You can’t even mention drag racing without including John Force and John Force Racing,” said Monster Vice President of Sports Marketing Mitch Covington. “Their winning dominance and high performance heritage are simply unmatchable. John is a personality that actually transcends the sport and his daughter Brittany is every bit the fierce competitor as her dad – and she’s a lot prettier than John. The next generation of JFR, Monster Energy is thrilled to have Brittany at the controls of the Monster Energy Top Fuel Dragster this season. Monster is all about unleashing the beast, and there is no other beast like a 10,000-horsepower, asphalt-wrinkling, Nitro-guzzling dragster.”