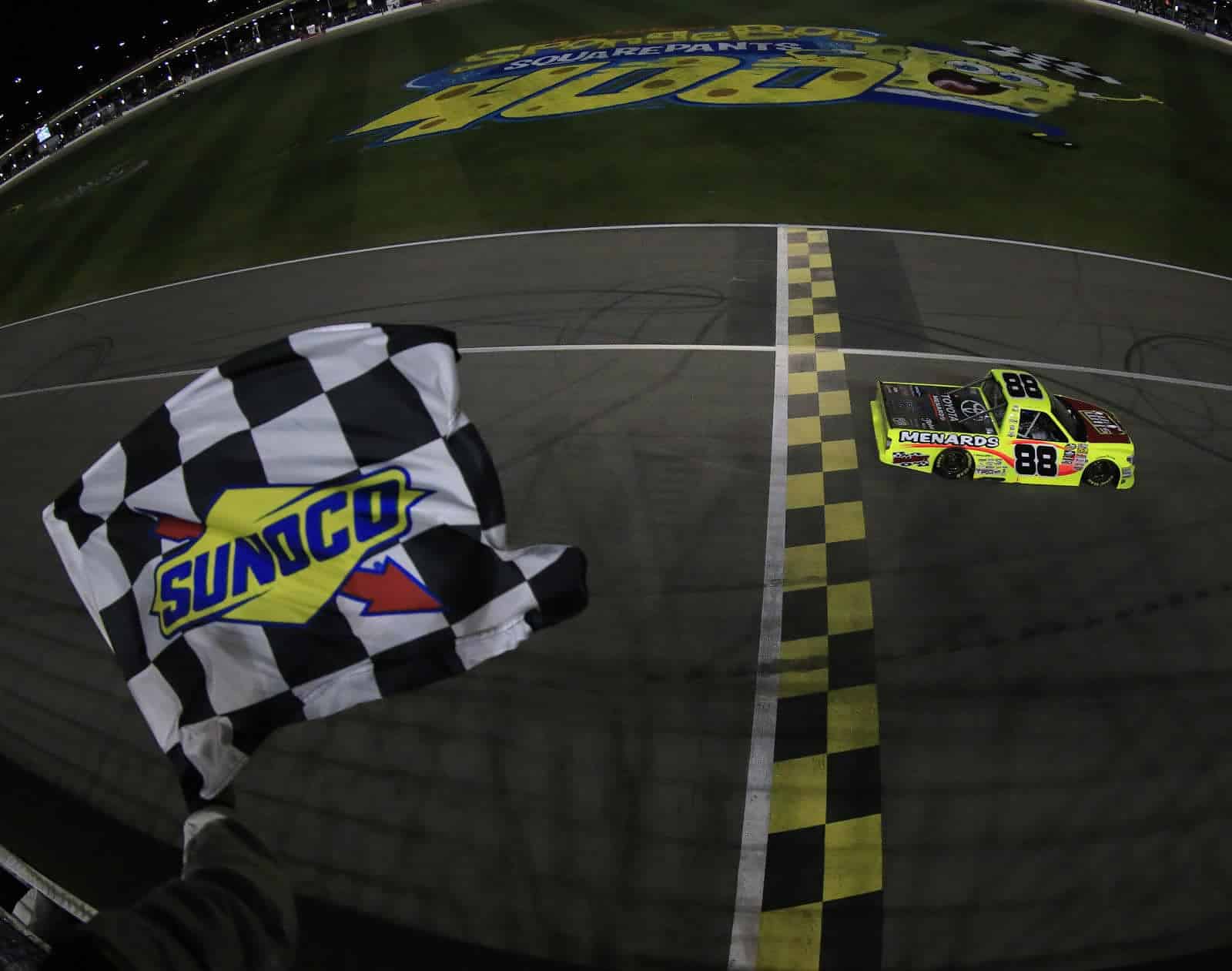 In a Nutshell: Matt Crafton survived a late-race fuel mileage fight with the leaders, including dominant driver of the day Erik Jones. Jones headed to pit road with only five laps to go after leading a total of 151 laps. Tyler Reddick initially inherited the lead, but ran out of gas a couple of laps later. Reddick’s dry fuel cell then handed the lead to Daniel Suarez, but Crafton was able to drive by. Not long after, Suarez also ran out of fuel, giving Crafton a comfortable lead to cruise to the checkered flag. Crafton became the first repeat winner at Kansas Speedway in NASCAR Camping World Truck Series history.

Who Should Have Won: Jones, without a doubt, had the fastest truck of the day. He was virtually unpassable on the track and usually had a several second advantage over the field during long green flag runs. However, the final green-flag run would eventually be Jones’ demise. Hoping a caution would come out that would allow the No. 4 to come into pit road, Jones would have to make the decision to head to pit road with just a few laps remaining.

Beyond His Years… Jones is only 19 years old, yet he continues to receive nothing but the highest praise from his fellow drivers. Even Crafton, in his post-race press conference, said Jones did a good job and would probably win mores races before the year is out. Though he hasn’t yet won a NCWTS this season, he does have a win in the NASCAR Xfinity Series and has two top fives and three top 10s in the four NCWTS races in 2015. Yes, he’s in fantastic equipment at Kyle Busch Motorsports in a truck that tends to be extraordinarily dominant when Kyle Busch is the one behind the wheel… but the truck doesn’t drive itself, and Jones excels in every vehicle he’s in.

Speaking of which, Jones was in a Sprint Cup Series car a few weeks ago at Bristol Motor Speedway, but you would never know it. Denny Hamlin originally started the race, but began experiencing neck spasms. A long rain delay was not enough for him to get those alleviated and they put Jones in the car. Jones would finish 26th, but was not credited with the finish because Hamlin was the driver who started the race.

Now, Jones is going Sprint Cup Series racing… for real this time. Jones will be in the No. 18, substituting for the injured Busch for the first time this season (Busch was sidelined following an injury in the Xfinity Series race in Daytona).

In fact, Jones is already turning heads. He was fastest in the final practice session, despite the fact that he has never raced a Sprint Cup Series car at Kansas Speedway before.

It’s safe to say there is a bright future for Jones.

Gaining Experience. Jones wasn’t the only young driver turning heads. Suarez, 23-year-old driver who hails from Mexico, was in only his fifth career NCWTS start and 16th total career start amongst the NXS and CWTS. Suarez was consistently in the top five, often in the top 10, and had a legitimate shot to win the race once the fuel-mileage situation began to sort itself out.

It may have been Crafton’s experience and raw speed that ultimately kept Suarez from doing so (that, and a dry tank). However, he didn’t wreck himself, anyone else, and sixth place isn’t bad finish for barely coasting across the finish line.

The sixth-place run means he now has four top 10s in four CWTS starts. Not bad.

Early Season Favorite Crafton has won two of the first four races, has an early points lead of 17 over Reddick and, oh yeah, is the two-time defending champion. He hasn’t finished worse than eighth and he has more experience than most of the drivers in the top 10 in points.

Now, granted, even Crafton admitted after the race that Friday night’s win was more luck than talent. With that said, it’s not as if anyone is accusing the No. 88 team of being a one-hit wonder. They’re easily the most dominant single-driver team in the Camping World Truck Series right now and, honestly, can hold their own against the KBMs and Brad Keselowski Racing’s of the NASCAR world right now. And ThorSport Racing is its own race team, out on its own in Sandusky, Ohio.

How many race teams can legitimately stand up to Sprint Cup Series affiliated drivers and teams in either Trucks or the Xfinity Series? That team has a lot to be proud of and it will be extremely difficult to stop them.

2015 Rookie of the Year Candidates

No. of rookies to finish in the top 10: Three – Hayley, Justin Boston and Hemric.

Rookie of the race: Hayley finished fifth. It was his first top-10 finish of the season.

Points Update: Crafton’s second victory gives him a 17-point lead over Reddick. Jones remained 13th in points with an 18-point deficit. Johnny Sauter and Hayley round out the top five, 22 and 52 points back respectively. The top four positions remained unchanged. Hayley jumped three spots thanks to his fifth-place run.

Quotable: “I said when I took the checkered flag I’d rather be lucky than good sometimes and we definitely were that tonight. We definitely didn’t have the fastest truck. I felt we had the second fastest truck and just lost track position. I had a bad vibration at one point and we took four, a lot of people took two or no tires and it just got us back there. I could catch those guys but it was super, super tough to pass. I said you’ve got to be close enough to be able to sneak one out every once in a while, and I’ve things like this so everyone once in a while when we win, I don’t feel too bad about it.” – Matt Crafton, race winner

“I didn’t know how short we were, but I knew the fuel window. I knew we had to save and I couldn’t give the lead up to the [No.] 19 (Tyler Reddick) at that point. If a caution would have come out – losing track position is so big this year, if we would have lost the lead then we would have never been able to get it back. It’s just a shame. I saved as much as I could there later on and it just wasn’t enough. Eight laps short, we just couldn’t do it. We had a fast Tundra and it’s just a shame we couldn’t bring it home for these guys.” – Erik Jones on the frustration of running out of fuel after such a dominant performance

That's why they r never over til they r over. ?. Proud of the speed in the @KBMteam Tundra's but gotta figure out the fuel mileage!!

All in all when the going got tough @TeamBKR got tougher. We aren't going to bend under pressure that easy ?? We will get them at Charlotte!