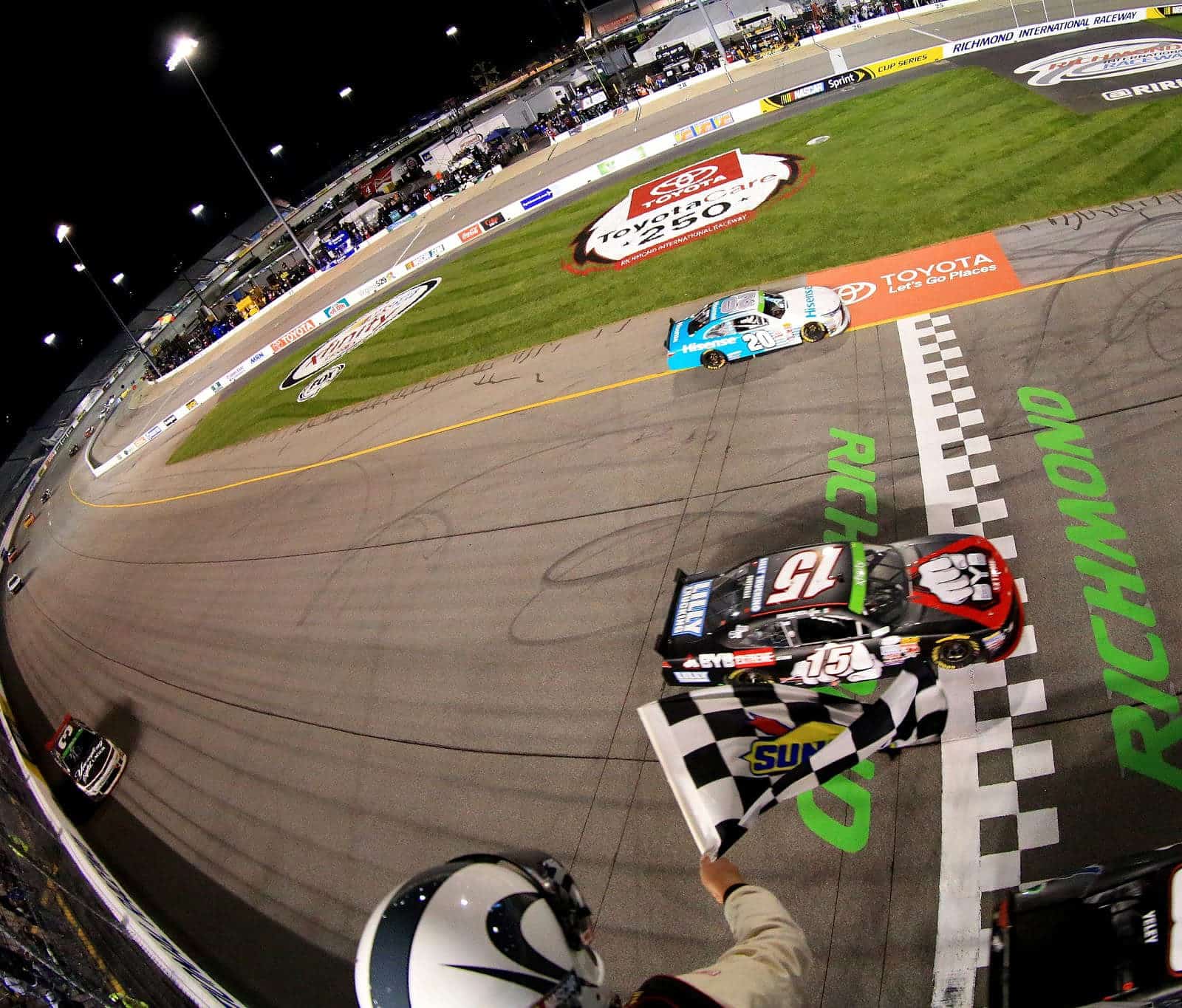 Hamlin had to rely on 18-year-old Erik Jones to complete the race, and as a thank-you gift, gave Jones and the rest of the Xfinity field tips on how to win – and for that matter, dominate – the ToyotaCare 250.

Joey Logano was the man to lead every lap last week at Bristol, but was the best of the rest on Friday, finishing 3.719 seconds behind Hamlin’s No. 20. Regan Smith was the highest-finishing NXS regular in third, followed by Jones in fourth and Chase Elliott in fifth.

Only twice, and for two laps total, did Hamlin relinquish the race lead. Brian Scott nipped Hamlin at the start/finish line shortly after a restart and Elliott Sadler took to pit strategy to get a lap led. In other words, two drivers have led all but two laps the last two races.

Well… as far as Hamlin is concerned, there was only lapped traffic between him and Victory Lane all night. For the 12th time in his NXS career and first time since 2011, he grabbed a win in the lower series. It was also the fifth time he led over 100 laps en route to victory. Joe Gibbs Racing continues its hot streak on the short tracks in 2015 after winning Sprint Cup events at both Martinsville and Bristol.

Jones made his name known two weeks ago at Texas Motor Speedway by bringing JGR to Victory Lane. Last week, Jones made his first laps in a Sprint Cup car at Bristol behind the wheel of Hamlin’s No. 11 Toyota.

Now this week, Jones proved to be the only driver to keep pace with second-place Logano, passing him multiple times throughout the night. Seems like every week Jones shows us something new.

It may be the first time in quite sometime, in any series, that Kevin Harvick is included in ‘The Bad.’ After apparent right-front issues for the No. 88 JR Motorsports Chevy, the seven-time Richmond winner would settle for a 18th-place finish. The result ends a 29-race streak of top 10s in the Xfinity Series.

Chris Buescher came into the eighth race of 2015, tied as the point leader for the second time in his career. With four top fives in the previous seven races, Buescher looked to continue the hot streak at Richmond, the track in which he made his series debut in 2011. However, the long green-flag runs hurt the No. 60 Roush Fenway Racing team, and although he found luck with two cautions keeping him on the lead lap, he eventually lost a lap, then two, then a third on his way to 20th. He now exits Richmond third in the championship standings, 11 behind leader Ty Dillon.

During a pit stop for Brendan Gaughan on lap 113, a horrifying fire broke out near the left rear of the No. 62 Chevy. Two crewmen from Gaughan’s pit were momentarily engulfed in the blaze, plus a member from Eric McClure’s pit.

First, thank you all for the thoughts and prayers. Second, the boys will be okay. One of them will be out awhile, but should be ok

Landon Cassill deserves a pat the back after driving his JD Motorsports No. 01 to a top-10 finish. Starting the race from the 21st position, Cassill kept his quarterpanels clean and for the first time since Road America last summer came home with a top 10.

There were 10 drivers who will perform double duty, with the first of two races now in the books. Hamlin was clearly in a different postal code in terms of going fast, leading 248 of 250 laps. He led the double-duty drivers, with Logano in second. Elliott will be making his second Sprint Cup start on Saturday night for Hendrick Motorsports and brought a solid fifth-place for his JRM team.

Richmond has lately been known to favor one driver at a time. Much like last September, the last time the series visited the ¾-mile track, the leader was near untouchable. That time it was Kyle Busch leading flag-to-flag, and this time it was Hamlin leading all but two laps from pole position. And just a couple years ago, NXS regular Scott led 239 laps before Brad Keselowski stole the win on a late restart. It’s not what we’ve come to expect when we go green for short-track racing.

What we have come to expect, not only at short-tracks but all tracks, is the dominance of the Sprint Cup drivers. You will have to go back 11 years, 23 races, to find the last time Richmond was won by a NXS regular.

Although that’s not entirely ideal from a competition standpoint, not to fear; the NXS drivers are still going to put on an exciting battle for the championship. After eight races, the top five in the standings are within one race (48 points) of each other, and the top six in points see four organizations represented.

With Talladega fast approaching, expect a wild race to shake the points up even more.

“He was so fast — we had nothing for him. We had a second-place car. That’s where it was, just second place. I know what it feels like to be on the other end of the butt-whipping now. It’s not as much fun from this side. But congrats to them. They deserved it, obviously. We didn’t have a shot.” – Second-place Joey Logano

“The 100th Xfinity win for Toyota — that’s a big one. I was able to get the 100th Sprint Cup win at Loudon a few years ago for those guys and JGR. This is a big win for everyone. I’m glad to be working with Wheels again (crew chief Mike Wheeler). He put a rocket under us tonight.” – Race winner Denny Hamlin, who was reunited with Mike Wheeler for the first time since 2014, when they worked together for six Sprint Cup races