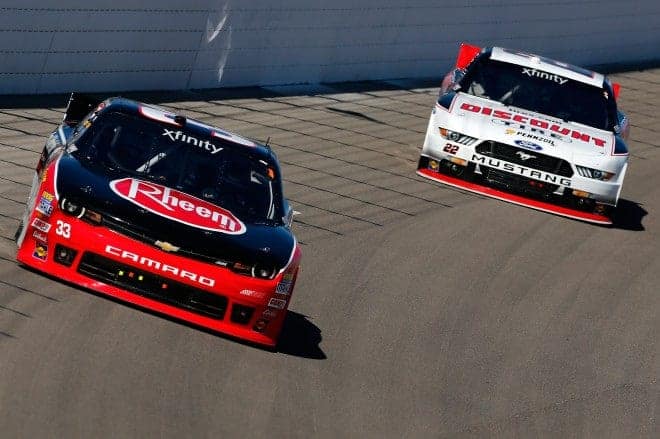 On Thursday, the Xfinity Series held both of their practice sessions for Friday night’s O’Reilly Auto Parts 300 at Texas Motor Speedway. Both of those sessions ended the same way. Austin Dillon was at the top of the list.

In the first practice session, Austin turned in a lap at 29.527 seconds (182.883 mph) to top the list. He also didn’t take much time to do it. Dillon’s No. 33 only ran two laps in the whole session. The fast lap came on the second of those two laps.

Austin’s lap was an eighth of a second quicker than Sam Hornish Jr. in second for Biagi-DenBeste Racing. Elliott Sadler was the best of the Xfinity Series regulars in third for Roush Fenway Racing, while Ty Dillon and Erik Jones rounded out the top five.

In the second session, teams transitioned to race setups due to the fact that the second session was run at a time of day that would better simulate race conditions. Here, Austin and the No. 33 team doubled down on their dominance.

Austin and his Ruud-sponsored No. 33 were again fastest with a lap of 29.773 seconds (181.372 mph). That lap was nearly a quarter of a second faster than Regan Smith in second. Darrell Wallace Jr. was third quickest, followed by Brad Keselowski and Sadler. Other notables include Brendan Gaughan in seventh, Chase Elliott eighth quickest, Daniel Suarez ninth fastest, Dale Earnhardt Jr. 12th and Brian Scott 18th.