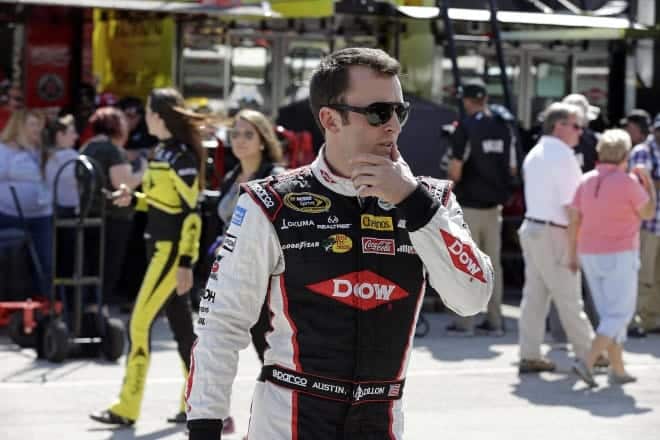 There’s something about the Dillons and Daytona Speedweeks that just seems to gel. Following a frenetic group qualifying session, 2013 XFINITY Series champ Austin celebrated his return to the series by winning the pole for the Alert Today Florida 300. Dillon’s pole follows that of younger brother, Ty, who took the pole for Friday night’s Truck race.

Driving the No. 33 car for Richard Childress Racing, Austin clocked in with a fast speed of 190.251 miles an hour. Justin Marks qualified on the outside pole, posting a 190.158 mph speed with RAB Racing. Chad Boat was a surprised third, followed by Brendan Gaughan and Aric Almirola to round out the top-5 starters.

The session was marred by one big wreck and several near-misses as drivers again pulled different strategies and braked suddenly, both on pit road and off it to avoid being the front-running car. Harrison Rhodes, Tanner Berryhill, Carlos Contreras, Daniel Suarez, Blake Koch and Landon Cassill were involved in the biggest incident, a nasty crash around the start/finish line that caused three of them to miss the race. The crash also ruined Dale Earnhardt, Jr.’s run to the line, leaving him forced to use a past champion’s provisional to make the race.

Dillon, the 2014 Daytona 500 pole sitter is running full-time for RCR in the Cup Series. He’ll run a limited schedule of around 20 XFINITY events for the No. 33 team this year.