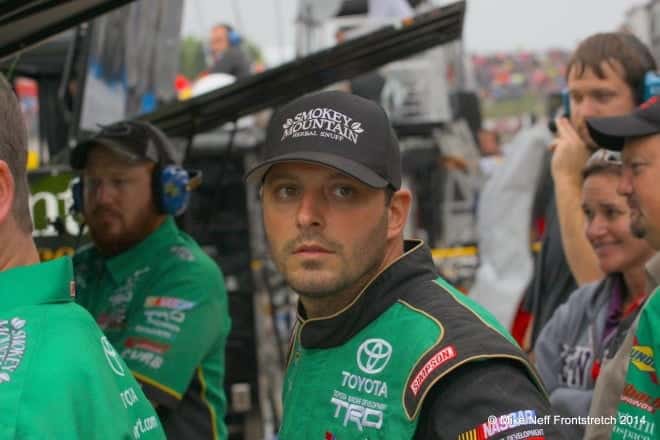 On Saturday, BK Racing announced that Camping World Truck Series regular Johnny Sauter will drive the No. 83 Toyota in the Daytona 500.  Sauter will officially replace JJ Yeley, who moves over to the team’s No. 23 entry for the full season, replacing Alex Bowman.  Sponsorship will be provided by Dustless Blasting, part of a package that leaves them the primary at both Daytona and Talladega events.  Since the No. 83 team finished 2014 41st in points, Sauter will likely have to race his way into the field through the Budweiser Duels.
Sauter is happy for another chance at racing in Sprint Cup, if only on a part-time basis.

“I am excited to be joining the BK Racing team for the start of the 2015 NASCAR season,” he said Saturday.  “I am thankful for the opportunity to get behind the wheel of the No. 83 Dustless Blasting Toyota and compete with the top athletes in the motorsports industry. We are going to get out there, give it our all and hopefully come home with a good finish for this team and sponsor.”

BK Racing co-owner Ron Devine is high on Sauter’s ability to get the job done. “We are very comfortable with our chances to race our No. 83 Dustless Blasting Camry into the Daytona 500 with Johnny behind the wheel.  He has a lot of experience running up front, is a veteran in the sport and a loyal Toyota Racing driver,” Devine said.  “Regardless of the outcome of the Budweiser Duels, we look forward to working with Johnny on a select race schedule in 2015.”
Dustless Blasting will serve as the team’s primary sponsor in all four restrictor plate races in 2015, moving over to the No. 83 team from the No. 23.  In 2014, Dustless Blasting served as the primary sponsor of Bowman’s Toyota for two races.  Bowman’s best finish in those events was a 36th at Watkins Glen.
Sauter has 84 career Sprint Cup starts, having run full-time on two separate occasions (the first half of 2004 with Richard Childress Racing and 2007 with HaasCNC Racing).  He has one career top-5 finish, a fifth at Richmond in 2007, along with three top-10 results.  Sauter’s best finish in the Daytona 500 was a 16th in 2007.