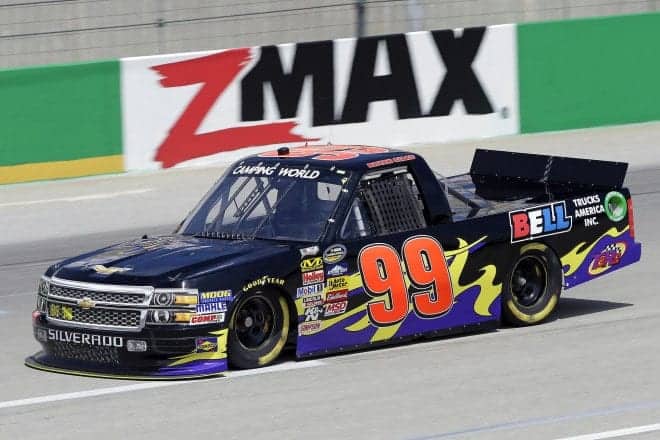 High Point: Despite an eighth-place finish for Bryan Silas at Texas Motor Speedway in June, a career best, that race was not his most impressive run. Why? Only 27 trucks entered said event and three of them chose to start-and-park, weakening the field and creating an easier top-10 opportunity. Instead, it was Silas’s other top-10 finish, in the Lucas Oil 225 at Chicagoland Speedway which was far more impressive and exciting to watch.

Silas qualified better and kept himself right up in the hunt all evening, even earning himself a little airtime on FOX Sports 2. The driver blushed about how his small team had improved and mentioned he could have finished as far up as sixth had the front end of his Chevrolet not wound up damaged.

Low Point: Silas’s worst finish of the season was 33rd at Martinsville in March. Here, he fell victim to Spencer Gallagher being taken out by part-timer Caleb Holman. Silas had nowhere to go but directly into the No. 23 Allegiant Air Chevrolet, sparking a nasty fire in the process. Crashing and destroying equipment is normally bad enough, but Silas also managed to embarrass himself while simply trying to exit his vehicle. Luckily, a HANS Device not only helped protect Silas from injury, but also from the possibility of hitting his head on the pavement during the debacle.

Summary: In their third full-time season running the Camping World Truck Series, T3R2 improved leaps and bounds after switching from Ford to Chevrolet. Qualifying, which was one of their biggest weaknesses, improved significantly, and having that extra pace put them in position to earn great finishes on their own accord. Toward the end of the season, Silas was qualifying near the front of the field on a regular basis and battling teams with much better funding. New equipment clearly breeded better results.

While Silas and T3R2 are undoubtedly happy with their top-10 finish in points, circumstances definitely played a role in their improvement. He was 12th for most of the second half of the season before the spat between Steve Turner and Harry Scott Jr. erupted and all but ended Ron Hornaday Jr.’s season.

The other major factor was the implosion of John Wes Townley after he left Wauters Motorsports for the new, family-run Athenian Motorsports. On a good day, Silas could beat the better-funded Townley on merit, but Townley’s propensity to crash came back with a vengeance once he moved to Athenian. First, there was the injury at Pocono that knocked Townley out for three races, then a series of bad-luck incidents that stretched for most of the fall. Those DNFs dropped Townley all the way back to 15th in points.

2015 Outlook: T3R2 announced on Twitter that Silas will return to the No. 99 full-time next season. No sponsorship was revealed, but the team states more information is forthcoming. If the team can keep their momentum going, incremental improvement is certainly possible. More top-10 finishes could be in the offing.